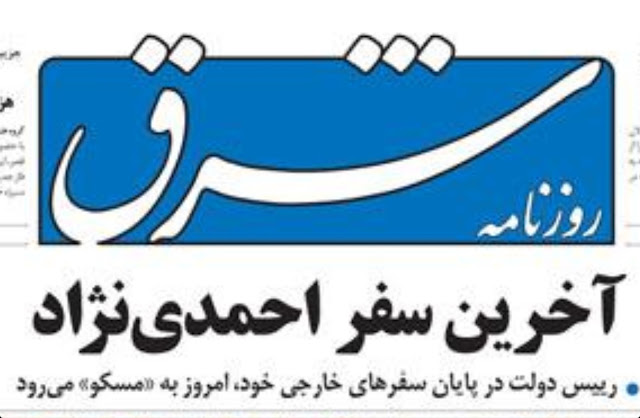 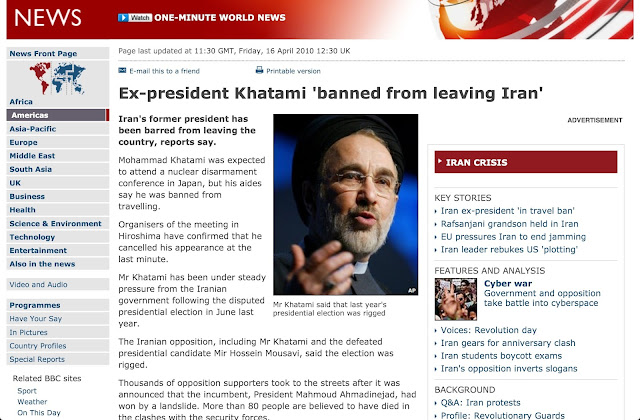 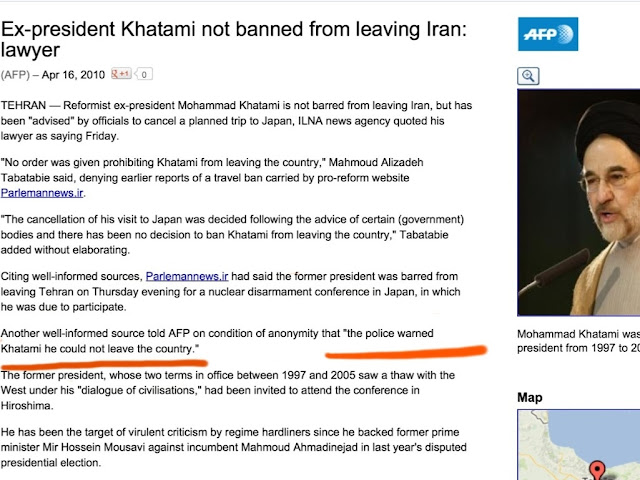 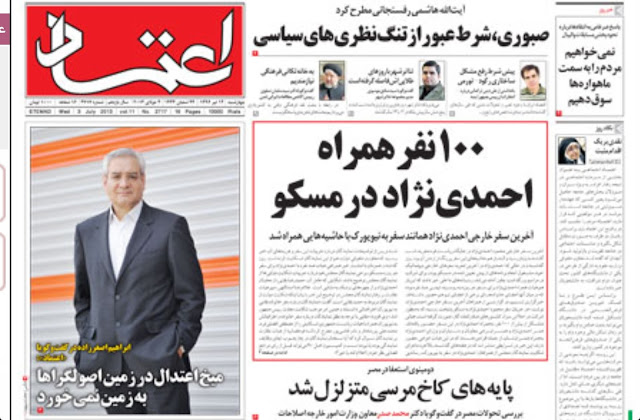 This sounds a lot like the gripes one reads about America in the Workers Advocate.

We Americans have a saying: "Love it or leave it." In the case of Jabbar, he didn't love Iran, so he left it. The curious thing is, why hasn't he gotten over the resentment of leaving? Seems he's an eternal axe to grind. A hard way to go through life.

Jabber why do you make-up so many LIES and DISINFORMATION and RUINING Uskowi's Blog with ZERO CREDIBILITY?. President Khatemi is one of the most well traveled ex-Presidents of Iran and even I had an occasion of listening to him in Europe recently. He travels frequently and is well respected and Iranian embassies afford him highest respect and protocol. PLEASE GET SOME ACCURATE INFORMATION & YOU HAVE NO LICENSE TO PERPETUATE YOUR DISINFORMATION:

On 2 September 2005, the then United Nations Secretary-General Kofi Annan appointed Mohammad Khatami as a member of the Alliance of Civilizations.

On 28 September 2005, Khatami retires after 29 years of service in the government.
On 14 November 2005, Mohammad Khatami urged all religious leaders to fight for the abolishment of atomic and chemical weapons.
On 30 January 2006, Mohammad Khatami officially inaugurated the office of "International Center of Dialogue Among Civilizations". An NGO with offices in Iran and Europe that he will be heading, after his retirement from the government.
On 15 February 2006, during a press interview Mohammad Khatami announced the formal registration of the European office of his Institute for Dialogue among Civilizations in Geneva.
On 28 February 2006, while attending a conference of the Alliance of Civilizations at Doha, Qatar, he stated that "The Holocaust is a historical fact." However, he added that Israel has "made a bad use of this historic fact with the persecution of the Palestinian people."[40]
On 7 September 2006, during a visit to Washington, Mohammad Khatami called for dialogue between the United States and Iran.
On 24-28 January 2007, Mohammad Khatami attended the Annual Meeting of the World Economic Forum in Davos, Switzerland. German Chancellor Angela Merkel, then British Prime Minister Tony Blair, former U.S. President Bill Clinton and First Lady Hillary Clinton, then U.S. Vice Presidents Al Gore and Dick Cheney and the then U.S. Secretaries of State Madeleine Albright and Colin Powell were among those attending.[42] Khatami and Senator John Kerry have expressed similar opinions and shared words with each other in the World Economic Forum in Davos.

Mark, you should at least differentiate yourself from the foot soldiers and say how this relates to Ahmadinejad's trip to Moscow.
In Iran we have a saying "گوز به شقیقه چه کار داره".

has Khatami been doing much traveling lately, dude?

Because maybe he is compensated for his faulty "diagnoses" on Iran's conditions...They have got lots of money to waste for zionist's causes.

They love that kind of "prophecies-diagnoses" in that "beacon of light" place for their kinds of a humankind...

Khatami also attended a funeral of the pope, so Jabbar has no problems with his own lies and apparently sick mind...

@anon 10:31
Khatami attended the funeral of John Paul II in 2005, while he was still president.

He hasn't left the country since he was "advised" against traveling abroad in 2010.

If you have specific facts to the contrary please do share.

Maybe because you have a long-standing interest in juxtaposing "Gooz and shaghighe" to make a point that there is no freedom in Iran. Mark's diagnonosis of your resentment complex is quite accurate and is highly visible in your unprofessional rhetoric.

Another factual point that shows the maturity and democratic traditions in Iran is that with the exception of CIA supported MKO terrorism in the 1980's and the unfortunate murder of President Mohammad-Ali Rajai who was the second elected President of Iran from 2 to 30 August 1981, after serving as Prime Minister under Abulhassan Banisadr, all Iranian ex-Presidents are alive,healthy and living normal lives including even the burka runaway Bani Sadr, who is running his mouth in Paris. This is unique in the region where in other Arab countries, Pakistan (every leaders either assassinated, coup or jailed)and even Turkey (President Adnan Menderes and many Ministers executed by the military and many coups) and almost all "leaders" have been overthrown, murdered or sent into exile.

Iranians on the other hand have shown their respect for elected officials and leaders and there has been a smooth and peaceful transition of power since the GREAT REVOLUTION. This is great testament to the impartiality and wisdom of the Rahbar, a unique institution that guarantees democracy and peaceful transition of elected governments. The success of Iranian hybrid democracy is what irks the enemies of Iran and their frustrated lies. It is also good that Nader Uskowi took a very objective, mature and rational position during the last election and all kudos to him for highlighting the dynamics of internal politics of Iran. It is great to see that most Iranians at home and abroad setting aside primitive and outdated anti-Iran rants and now focusing on the progress of the great nation in all spheres. It is indeed time for moderation and putting Iran on course for its manifest destiny as even the Economist put it "Persian Power on the rise again". Iran is too big and smart to hold back by its pathetic enemies.

as Ahmadi nejad come to power the iran feared us/israel invasion
now as he is leaving
the Us/israel fearing iran.

Since Jabbar has been instructing Mark, that he should at least DIFFERENTIATE himself from the FOOT SOLDIERS, then I would like to know whether the Officers run this BLOG, and what is THE ARMY the Jabbar has meant....?

I believe that on the Jabbar's territory only one army operates and maybe some zionist's symphatizers...and couple agencies.

heh heh heh
delusions of grandeur accompanied by complaints about persecution by enemies.


crap seen far too often from that backward little corner of the world.

Is this the best hasbara rant for the day? not a very good effort and your shekels will be decreased as there is less US charity these days, you know austerity and all.