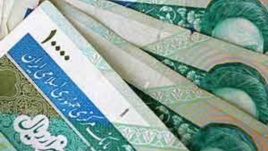 The Iranian currency, rial, has risen 17 percent in value against dollar since the victory of Hassan Rouhani in last week’s presidential election. Rial hit 31,500 per dollar on Saturday. It was traded at nearly 38,000 to a dollar just before the election.

It will go down again.

"The Iranian currency, rial, has risen 17 percent in value "

"The Iranian currency, rial, has risen 17 percent in value in one of the multiple exchange rates operating in Iran.

Except the open market rate is the most accurate indicative of the national economy. Yes, the government can "establish" artificial rates of exchange, in a sense subsidies cheaper dollar, but the experience of the last year of Ahmadinejad's government showed that the open market rate is the driver of imports/exports generally, notwithstanding few exceptions for goods controlled through "official" exchange rates.

"Talk of Western and Arab military support for rebels trying to topple President Bashar Assad has led to panic buying of the U.S. currency by jittery Syrians, pushing the Syrian pound above 200 to the dollar this week, a fall of 20 percent in four days."

The rial will most likely continue to gain strength through the next couple of years. My savy persian friends, please ensure you are taking advantage of this eventuality by hedging your risks properly. I am not sure where u can buy call options on the rial in the open market? Any one with expertise please comment.

Rial is rising and the probability for replacement of the S-300 is rising too.

From Russian sites' information, there are news about an offer to the IRI, to deliver the Antey 2500 systems; which can shot down 24 aircrafts during close times within 200 km distance, or 16 balistic missiles..., as a temporary replacement for the S-300.
Suppossedly, outgoing president Ahmadinejad may visit Russia on July 1, 2013.....and talk about that matter too.

Yes indeed. I had posted a detailed analysis of the Antey 2500 delivery to Iran but somehow the censors of the blog did not like hearing the truth as usual. Also the Tehran Stock Exchange is up 7% in 2 days. Iran is doing really well in all spheres and this upsets the anti-Iran delusional set.

Here's in-depth information complete with performance charts of its missiles on the Antey 2500, the system that's being offered to Iran.

The rial will go down again.