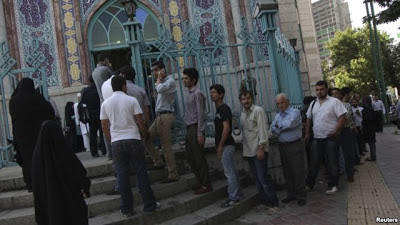 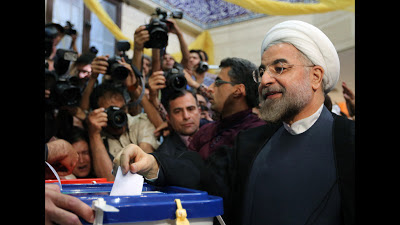 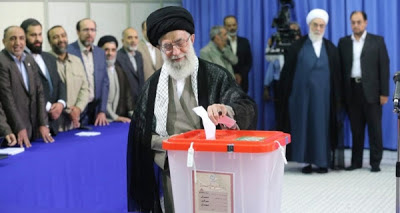 More than 50 million eligible voters are choosing from the six candidates cleared by the Guardian Council — a candidate representing the reformist/moderate coalition, four principlists (conservatives), and an ultraconservative hardliner.

Ja-li-li, Ja-li-li! He will continue in Ahmadinejad's footsteps, a strong and determined character who knows what must to be done to keep the country on its path of independence!

Rouhani will gullibly surrender our atomic research programme! All the funding and other resources spent since 2005 will have been for nothing! And Iran will then be back on square one and nobody will compensate Iran for all the missed opportunities that was missed due to years of sanctions, and the majority of the embargoes will not be removed anyhow no matter what Rouhani says or do because, on a fundamental basis, the US is stubbornly and illogically against the Islamic system in place.

I wanted to go for Qalibaff.

But since I heard the WMD story on Syria declared by the US (Yet again) and their plans to march in or at least drone up Syria and the Iranian pilgrims there ;) / I changed to Jalili. We need someone with balls in there to fight.

Rowhani represent more of Iranians...As they are are moderate, and pragmatic by culture and their nature. Jalili represents a minority.

-Indeed history's most rogue empire will regret -pushing into a corner- a PEOPLE!, who are moderate and pragmatic by culture

Whoever the would-be-president of the great nation of IRAN is, the person must be really brave, strong and confident enough to stand up very firmly against the world's Zionist warmongers of the U.S. and Israel's long years of tireless and endless 'barkings'(be it empty or otherwise).

http://www.youtube.com/watch?v=g-LdJ4FMIa8 --- The importance of Iran election

My family in London voted for 3 different candidates.

Myself and one of my children went for Ghalibaf, my wife for Rohani and my two other children voted both for another (but the same candidate)

If in Iran the race is as close as in my family then it will go into the second round.

Azari by fortune and Iranian by grace of God.
Dariush London

He also needs to answer to the people who voted for him. Cannot ignore their needs for economic justice.

Ghalibaf,Rohani have criminal records as long as the Thames river.So tell me basij boy,what are you doing living in a free society?

I've asked a lot of my friends in Iran about the "election" turnout.Without any propaganda they told me the turn out is very low in most of the districts.I will find out more about these farcical selections in the following days by first hand information.

Really? calling others names makes you strong and feel better? And no other politicians in West have done anything Criminal? how about supporting and making Coups in South America from El Salvador to Chile where in process thousands of innocent civilians were tortured, killed or missing? does that count as criminal or politicians are just protecting their own interests? Also you call living in a society where every move is photographed, every digital activity is stored free? Not saying it's better in Iran but I certainly do not think it's as free as advertised in many of the western civilizations either.

But the us representatives have already said that that election is ILLEGITIMATE !!!

Dariush
So generally your family is against reformers, except your wife, who is from a jewish family, because Qhalibaf, by my judgment, supports the Supreme Leader without hesitation.

I think whoever gets elected, he will face the same dangers facing the Islamic Republic and they ( a possible elect) will have to follow the same logic, to protect the Iranian nation from outside (and inside) enemies.

The first round will show whether a claim of majority by the reformers camp (count votes Rouhani and Gharazi toogether), is a true claim.

This is an Iranian site for Iranian issues,not a site for international comparisons.But if you insist then the regime in Iran is known to have murdered 10000 young people back in 1987,a documented fact.The regime rapes,tortures,murders countless Iranians a day as a matter of policy.I don't care what other countries do.Seven million Iranians have choosen to live outside Iran,that speaks volumes by itself.