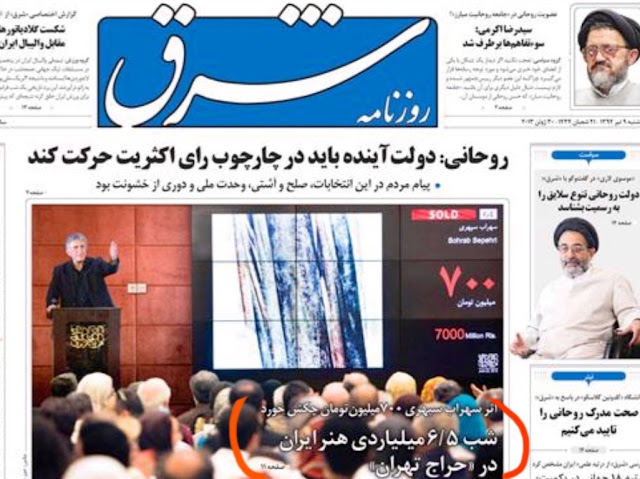 Mr. Sepheri is considered one of the best known modern poets and Iranian painters (3,5).

While the interest in art and culture maybe a luxury a few Iranians can afford, this event and recent signing and dancing in the streets, shows that the real Iran is ready to sprout even with the hands of the regime still around its neck.

JABBAR-! thank you for a new JOKE!! [AS THOUGH THE Khatami gaffe was not enough]-hoping to read more!!!.

Earth to BMA
I'm here to please. The angrier the cyber basij the better I'm doing my job of exposing their regime and advocating for Iranians left at their mercy.

With regards to khatami not bring allowed to leave the country in recent years, I stand by every word.

I even added a couple of images to the post showing the news of his travel ban in 2010, for those cyber basij who don't read the intelligences ministry memos and get their news of their regime oppression from us.

Earth to Dr.
wake up - we don't want your expositions !
watch this you will see the alternative you are advocating

Jabbar Fazeli,MD...I think this B.M.A and Anon 3:41 are both sides of the same coin.Namely the same cyber basij.

Fazeli MD
You don't make us angry. Did you hear BMA saying he was angry. You are actually the fun part of this serious blog. Keep us laughing. You are doing your job well. Don't worry, Zionist support will not be seized.