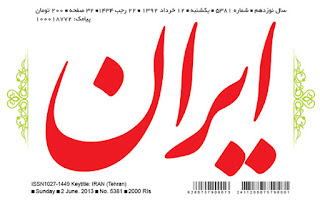 Iran’s judiciary, in a move that is seen as an extra-judiciary action to influence the outcome of the upcoming presidential election, today ordered the closure of government-owned newspaper Iran, which is believed to support President Ahmadinejad and any candidate he would endorse for president. The election is only 11 days away.

Iran is a widely circulated daily. The head of Judiciary, Sadeq Larijani, is one of the leaders of the ultraconservative block within the Islamic Republic. The block also holds a majority in the Guardian Council, which last week disqualified Ayatollah Rafsanjani, a founding father of the Islamic Republic and former president, to run in the election.

The two actions combined indicate a desire, indeed a concerted effort by the ultra right to choose the next president with any means possible, including what amounts to be a coup covered up under the guise of actions by the Judiciary and the Guardian Council.

Meanwhile, the police interrupted a speech by Hassan Rouhani, the preferred candidate of the moderates and the reformists, on Saturday and arrested six of his campaign staff. The country’s police chief made the intent of the Judiciary very clear:

“If they candidates fail to (dissociate themselves from the reformists), then naturally the police will intervene and deal with anyone [displaying] antirevolutionary behavior,” said Iran’s police chief Brig. Gen. Esmail Ahmadi-Moqaddam. (Fars News Agency/FT, 2 June)

The 2013 presidential election is turning out to be a farce.

Photo: Iran’s logo and masthead dated 2 June 2013. The Judiciary closed the paper later in the day. (Iran)
Posted by Nader Uskowi at 1:53 PM

is there still anyone too blind to understand the extent of the contempt that the lice-ridden masters of Iran's government hold for democracy and human decency after having just had their nose rubbed in this latest turd that the dignity of Iran has just been ordered to swallow?

how vile are the dictatorial clique that they can't stand dissent even in their own tiny group?

not surprising that when something done by the dictatorship is so utterly low and lousy that even the fanboy and other regime toadies have trouble trying to spin is reported..... there's a lot of silence.

There was my comment for that article submitted 24 hours ago, from the present comment's time, and I don't see the previous one so far yet...

They ridiculed me that I make several conclussions in couple sentences, but they delete most of my longer comments so far and don't even post info that my comments was deleted.

I do not "preach" as do other "important authors" DO, that the RUSSIA HAS THROWN ASSAD UNDER THE BUS, OR THAT RUSSIA AND CHINA SHOULD NOT BE MORE IMPORTANT PARTNERS IN "THEIR IRAN".