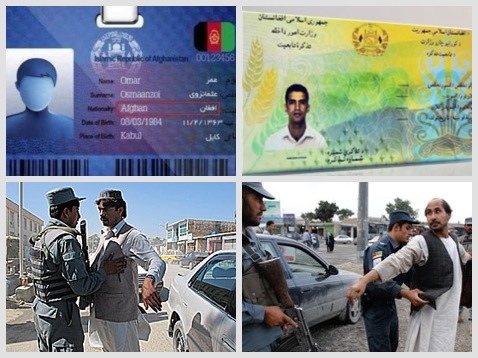 Part of the western effort in Afghanistan was "nation building," using the latest western blueprint for democratic society, so it should come as no surprise that the newly proposed Afghan national ID card was intentionally designed to not include "ethnicity" (1).

In an established democratic society the reasoning for the non-inclusion of "ethnicity" in government ID cards would be a no-brainer, but not in Afghanistan.

Ethnic minorities in Afghanistan have always claimed discrimination based on ethnicity, yet they are placing themselves on the wrong side of the argument surrounding the national ID cards. They are forcefully arguing that "ethnicity" should be included in national ID cards, and, by extension, the national digital data base created to store information on individual Afghans. 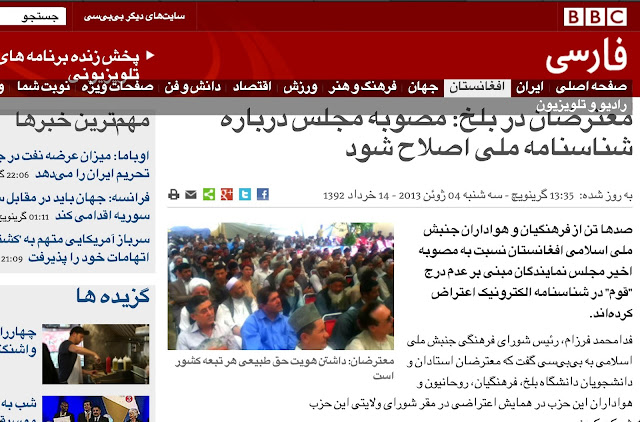 The USA and NATO spent billions on the Afghan war and some of those billions went to "nation building", but this episode of west-east disconnect shows the nation builders didn't take into account that the political comprehension of some issues is still elementary. By elementary, I don't mean Sherlock's elementary, but rather as in "elementary school".

Instead of parliamentary politicking,  the Afghans could have used a TV demonstration for the benefit of those who can't or won't read, demonstrating how ethnic profiling can worsen if the ethnic minorities get what they wish for. An ethnic Tajik, like general Dostum, trying to apply for a government job in Kandahar, or a Pashton applying for a job at Mazar-Al-Sharif will have a harder time if their national ID puts their ethnicity front and center, yet the Afghan media and politicians have a hard time explaining that to their people. Worse yet, most politicians and "intellectuals" are actually promoting the ethnicity inclusion in the ID cards (1).

Sadly, after more than a decade of "nation building", the government of Afghanistan and its western patrons have not been able to convey the most simple of massages (by western standards); I guess they assume people should know the basics already, but as this episode demonstrates, they don't. The consequence of this lack of basic understanding on both sides is huge, and I'm sure the Afghans will read about it in 50 years.

If we had already established that having ethnicity stamped on your forehead, or on an ID card is "bad" for minorities, then we could have moved on to addressing real minority concerns, some of which lie behind this unusual stance.

The minorities are rightfully concerned that the majority rule would seek to homogenize society or even deny the existence and importance of minorities in the name of "national unity".  This is an old fear as the majorities in the region have in the past sought to dilute or deny ethnic identity of minorities, from China to Iran and beyond, in order to bolster a monolithic national image.

Such fears, however, are better remedied with targeted government strategies and appropriate use of the political process, such as the "optional" inclusion of "ethnicity" in the censors date, as is the case in the United States (3,4). This information doesn't, or at least shouldn't, make it to government databases containing individual and person specific data banks. Instead they would be used for statistical and general planning purposes. It is noteworthy that Afghan census data doesn't include questions about ethnicity or language (2), just as in the case in Iran. Collecting statistical data about ethnic groups is taboo, yet including ethnicity in a national ID card isn't. The first promotes recognition of the existence of various minorities (but not allowed), while the later promotes institutional ethnic profiling (supported by all, including minorities).

The moral of the story is that "nation building" is an intrinsic process and is multigenerational. A little nudge from the west is helpful, like not compromising on human rights and basic freedoms in countries like Afghanistan, but the west can not think for the common man on the streets of Kabul, or Tehran for that matter.

There has been some tangible progress in cultural areas in Afghanistan. They have for example even privat TV-stations in Afghanistan which we do not yet have in Iran; but unfortunatly yes, there are too many 'angry Afghans' in Afghanistans and their population is rising; Kabul is already inhabited by 5 million people

@anon 3:04
I don't disagree that progress has been made but in terms of nation building, there are pillars that need to be strengthened internally in order to put the country on the right track.
Needless to say that the true test if lasting progress in Afghanistan can only be gaged a few years after NATO forces leave.
I hope I'm not giving the impression that I agree with those who say Afghanistan, and Iran for that matter, are "not ready" for democracy. I couldn't disagree more, yet democracy needs to be based on internal push aided by others not the other way around.
Thanks for the comment.

My guess is they're concerned over security. When you have a security situation similar to Yugoslavia in the '90s, ethnic cohesion and identification are important. Unfortunate but this is what happens during civil wars with strong ethnic overtones.

Jabbar this may be one of those cases where you are again blaming the victims.

Thanks mark,
I don't know how to respond as I don't quite follow your logic. There is no guessing needed, you can analyze the facts and make specific points.

As far as Yugoslavia, I'm not sure what you mean as I actually happened to live in Yugoslavia in one of my other lives and they never included ethnicity in their government IDs.