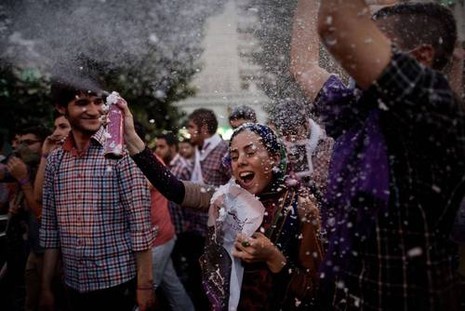 Israeli President Shimon Peres said on Sunday that the victory of Hassan Rouhani in Iranian presidential election signaled “a desire for change on the Iranian street.” Peres, however, was cautious in his praise of the president-elect, saying it would only be possible to judge Mr. Rouhani on his future actions.

Peres’s comments marked something of a departure from those of Prime Minister Benjamin Netanyahu, who earlier on Sunday cautioned against thinking things would change under Rouhani.

“Let us not delude ourselves,” Netanyahu said at the weekly cabinet meeting. “The international community must not become caught up in wishes and be tempted to relax the pressure on Iran to stop its nuclear program… (President-elect Rouhani) still defines the State of Israel as ‘the great Zionist Satan.’” [The Times of Israel, 16 June]
Meanwhile, the chair of Israeli opposition party Meretz said Rouhani’s victory and Ahmadinejad’s departure was a blow to Netanyahu and the extremist leadership in Israel.
“I extend my sympathy to the Israeli government that must bid farewell to Ahmadinejad, who served as propaganda card and as an excellent source of excuses to avoid dealing with Israel’s real problems,” Meretz’s Zahava Gal-on said. “I fear that the election of the moderate Rouhani is not just a blow to the extremists in Tehran, but also to the extremist leadership in Israel, which will now have to replace intimidation with actions,” she added. (Times of Israel, 16 June)
For yet another Israeli perspective on Rouhani’s election, please click to read Maariv’s Nadav Eyal article, “The People in Iran Have Turned the Table.”  The article is translated from Hebrew by Victoria Lymar and published in today’s edition of IranEdge.
Photo credit: Celebrations on the streets of Tehran after Rouhani’s victory. (AP/Ma’ariv/IranEdge)
Posted by Nader Uskowi at 11:50 AM

It is strictly forbidden to listen to even a single simple word that comes out from the mouth of the world's most evil nation of the Zionist Regime of Israel that ever existed and lived on the surface of the earth.

Strictly forbidden by whom? By you?

Khaled Diab, a Belgian-Egyptian blogger and journalist wrote an interesting article on the commonality of these two human specious - an interesting read indeed.

I am sure Iranian voters would be very happy to hear that their votes may help the decent Israelis and Arabs to get rid of Netanyahu!

The zionist regime is only concerned because their main excuse for trying to push America into a war for them, against Iran, is going. They are an entire state full of people like their crackpot leader nutty nutanyahoo, who want nothing less than total war.