Tanks in Beirut as Protesters Gathered At Iran Embassy 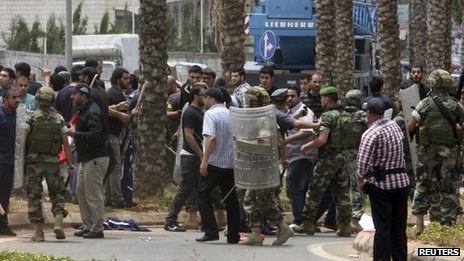 Lebanese soldiers blocked streets in Beirut with tanks and barbed wire for several hours today after the killing of a protester outside the Iranian embassy raised factional tensions already inflamed by the war in Syria, Reuters reported today.

The man, identified by Beirut media as Hisham Salman, head of the student section of the Lebanese Option Gathering, died when the Hezbollah militia opened fire at protesters marching toward the embassy. The Lebanese army then deployed armored vehicles and set up roadblocks to cordon off the city center and neighborhoods controlled by Hezbollah.

Demonstrators from a variety of groups, including Sunni and Shi'ite Muslims and Christians, marched in the city center in protest at Hezbollah's newly prominent role in supporting Syrian President Bashar al-Assad - its fighters helped Assad's troops retake the strategic border town of Qusair last week.
When protesters from Lebanese Option Gathering, a small and predominantly Shi'ite party opposed to Hezbollah, arrived at the Iranian embassy south of the city center in a bus, they clash with black-clad Hezbollah militiamen, who opened fire. (Reuters, 9 June)
Violence within Lebanon's Shi'ite community is not unknown but is less visible than that between Lebanese Shi'ites and Sunnis since the two-year-old Syrian civil war veered onto to a clearly sectarian course, pitting Assad and his fellow Alawites, an offshoot of Shi'ite Islam, against mainly Sunni rebels.
Photo credit: Lebanese soldiers and Hezbollah supporters are seen gathered in front of the Iranian embassy in Beirut June 9, 2013. (REUTERS/ Stringer)
Posted by Nader Uskowi at 5:04 PM

it's seems that it's not permitted to protest against Iranian involvement in Syria and Lebanon and Iran's Lebanese vigilantes believe that homicide is an appropriate response.

Hezbollah hasn't much interest in Lebanese law or the sovereign authority of the Lebanese state.

The terrorist Hezbollah has truly shown its colours.

Defeated foreign Salafi terrorists attacked two Iraqi military positions at the southern tip of their common border Sunday, June 9. They failed to beat the Iraqi troops back although a number of Iraqi officers and soldiers were killed or wounded. Shooting incidents flared during the day near the Al-Waleed Syrian-Iraqi crossing, but the Iraqi forces held fast, bringing in armor and helicopters for support.
This was their first engagement with Salafis in the 28-month Syrian civil war – but unlikely to be the last.

The fleeing terrorists are anxious to break through the Iraqi lines which were blocking their access to supplies of weapons and fighters sent over by alCIAda militias in the Western Iraqi Anbar region. The failure of the rebels' first assault set back their bid to loosen the grip of loyalist Syrian troops on this strategic border crossing.

Western military and intelligence sources report that while all eyes have been drawn in recent days to Hizballah's proactive military involvement in successfully supporting President Assad, the Iraqi role as been under-reported an treated as scattered and sporadic military actions, whereas in fact, Iraqi Prime Minister Nuri al-Maliki has even outdone Sayyed Hassan Nasrallah in the generosity of his assistance for supporting his Syrian Shia brethren.

Western intelligence sources estimates that al-Maliki is even footing the bill for Syrian government’s imports, from flour to Russian weapons systems and arms bought on the international market for the Syrian army and Hezbollah allies. Baghdad is also covering Syria’s consumption of petroleum, benzene, fuel distillates and oils for the Syrian army's logistical systems. Iraqi military units coordinate their moves with their Syrian counterparts on the borders and are gaining from Syrian military's battlefield prowess and experience.

Iraqi government has detached 20,000 troops for the mission of sealing the Syrian border against the entry of Wahabbi reinforcements and assistance originating in the Persian Gulf petro-pimpdoms and from Iraqi Sunni terrorist groups funded by the CIA, Saudi Arabia, Qatar and Persian Gulf Arab puppets. The Salafi terrorist attacks Sunday battered the Iraqi lines ranged there but failed to force any gaps as the Shia dominated Iraqi troops held their ground and swiftly mounted effective counter attacks, demonstrating Iranian training and advice. Iran, Iran, Syria, Lebanon, Bahrain, Yemen and the wider Middle East has over 150 million Shias who dwarf the Persian Gulf Arab puppets and Saudi Arabia by a 7:1 ratio in sheer manpower. Syria has DEMOGRAPHICS and FIREPOWER on its side in a conflict that it is bound to WIN.

President Assad is now flushed with ample funds and soldiers from Iraq, Lebanon, Iran, Yemen and the wider Shia diaspora. The trump card are the superb fighting men of legendary Hezbollah, new and replenished weapons by Russia and Iran and aircraft, tanks and artillery for Syria’s own stores.

Western observers have been astonished by the resilience of the Syrian Arab Army and its high level of professionalism, morale and sheer determination to fight.

With hefty financial, intelligence and military aid from four allies, Bashar Assad is better equipped than ever before to rout a largely foreign "opposition" that is divided and starved of assistance, arms and support.

The LION OF DAMASCUS has plenty of roar left in him.

Islamist-led Egypt and Tunisia "must be worried about the problems faced by Erdogan's Turkey, a supposedly successful model" of political Islam, said Antoine Basbous director of the Paris-based Observatory of Arab countries.

The chaos in the Arab world also vindicates Iran's hybrid Islamic democracy which has provided enough political and economic security to override any mass public discontent. With all their neighbors unraveling, Iranians have put their faith in their political institutions as the nation goes to polls to elect a new President in a stable and secure political environment.

"it's seems that it's not permitted to protest against Iranian involvement in Syria and Lebanon and Iran's Lebanese vigilantes believe that homicide is an appropriate response".

The truth is that you could care less about Arabs killing each other, so stop acting as though you care about the Human rights of Arabs in Lebanon! your only concern is Greater Persia, all you and the /Anti Mullah regime, supporters that comment on this blog, want is for Iran to face the same fait as Syria, but it will never happen! And you know it. Actually now its a bridge much to far.

son, you couldn't be more wrong and I've no idea where you get the idea that you know what I think and feel.

Hezbollah represents the majority of Lebanese population and has widespread regional support.

Let us not jump into conclusions-it is prudent to buy time and learn than rush to to some hasty judgments!

There is no such thing as an "hybrid Islamic democracy" in Iran.
Islamic democracy is an oxymoron.There is only theocracy in Iran.
That means Islamic dictatorship by a corrupt clerical minority.
Turkey has found out that political Islam is a creeping virus in society.
The Turkish youth don't want Turkey to become another Iran.
Iranians have no faith in the Islamic theocratic dictatorship.
To say otherwise will mean that you and people like you are minions of the
occupying zealots in Iran.

"Iranians have no faith in the Islamic theocratic dictatorship.
To say otherwise will mean that you and people like you are minions of the
occupying zealots in Iran".

Whether you like it or not, "The Islamic Democratic Government" of Iran is stable!

Khomeini and his followers were / are against such words as "democratic" If you believe in Allah and IRI, you don't have democracy. Everything is decided by him and his "representative" aka "Supreme Fuhrer" on earth for you.

"Whether you like it or not, "The Islamic Democratic Government" of Iran is stable!"

only in the sense that the Iranian government's leaderhip is worthy of being placed in a stable.