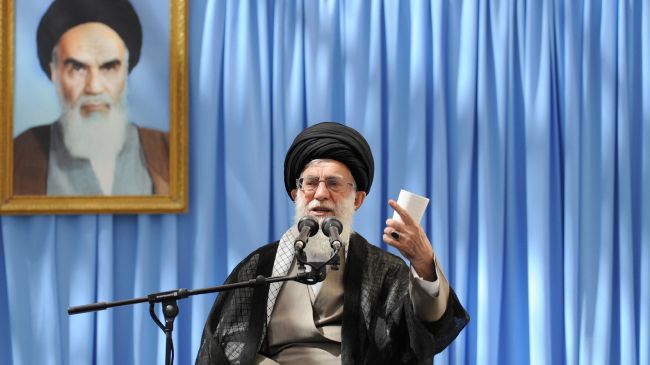 Iran’s Supreme Leader Ayatollah Ali Khamenei delivered a sweeping hour-long speech today at the shrine of the Islamic Republic founder, Ayatollah Ruhollah Khomeini, at the annual ceremony to commemorate the anniversary of the leader’s death. The speech was televised live. Major points of the speech related to the upcoming presidential election:

“The most important matter in the [presidential] election is to create a political epic and the enthusiastic participation of the people in the polls.”

“Yes, we have economic problems, yes we have inflation, but God willing the person who comes (the person winning presidential election later this month) can provide a solution to these problems. This is the wish of the Iranian people.” (IRIB, 4 June)

“Candidates shouldn’t make impossible promises. Speak in a way that if next year at this time you listen to a recording of yourself or people do, you won’t be ashamed,” said Khamenei, in an apparent reference to Ahmadinejad. “Make promises that you can deliver on so that afterwards you don’t say that they didn’t let me do this or didn’t let me do that.

“A vote for any of these eight (presidential) candidates is a vote for the Islamic Republic and a vote of confidence in the system and our electoral process,” said Khamenei, railing against foreign critics of Iran’s elections who call them “engineered” or “illegitimate.”
Photo credit: Iran’s Supreme Leader Leader Ali Khamenei addresses a ceremony at Imam Khomeini’s Mausoleum in south Tehran to commemorate the 24th anniversary of the passing of Imam Khomeini. 4 June 2013 (Press TV)
Posted by Nader Uskowi at 9:26 AM

It's engineered and therefore illegitimate.
No one believes in the systems so called "electoral process".

The Rahbar Sayyed Ali Khamenei has a lot to be proud of as Iran is now the region's unchallenged powerhouse.

Battle for Syria over, resulting in a stunning victory for Iran-Hezbollah. Western and Zionist intelligence completely wrong on Syrian war again.

When Zionist Defense Minister Moshe Ya’alon informed a Knesset panel Monday, June 3, that US/NATO supported Syrian Salafi terrorists still occupied four Damascus districts, most regional intelligence sources had already reported that the battle for the Syrian capital was all but over. Barring small pockets of weak resistance, President Bashar al Assad’s victorious army had virtually regained control of the city in an epic victory, unheard of in the Arab world before. From those pockets, the Salafi terrorits can’t do much more than fire indiscriminate mortars on civilians sporadically and alienate the population even more. They can no longer launch raids, or pose threats to the city center, the airport or the big Syrian air base nearby which is the hub of government offensive.

Large Russian and Iranian transports are constantly bringing in replenishment's for keeping the Syrian army and its allies fighting can again land at Damascus airport completely safely after months of terrorist sniping.

The terrorists have been pushed back over 40 kms from Damascus after being outflanked in a pincer movement in Damascus’s eastern outskirts executed by the Syrian army’s 4th Republican Guard heavy armored division commanded by the President's younger brother Lt. General Maher-al-Assad, and 3rd Mechanized Division and a special “Fuji” elite commando unit also known as the Pink Panthers (due to the pink earthen hue in their camouflage uniforms). Most of the dispirited and rudderless terrorist groups were pushed outside the city.

Senior Zionist military officers criticized the defense minister’s briefing on Syria Monday to the Knesset Foreign and Defense Committee and its faulty intelligence, mostly based on wishful thinking. They said he had drawn on a flawed intelligence assessment and were concerned that the armed forces were acting on the basis of inaccurate intelligence. Erroneous assessments, they feared, must lead to faulty decision-making. They cited two instances:

1. On May 5, the massive Zionist bombardment of Iranian weapons stored near Damascus for Hezbollah, turned out a month later to have done more harm than good and has created a strategic nightmare. It gave Bashar Assad a boost domestically and internationally, instead of weakening his resolve it propelled him into a more confident stance. It also inflamed both Russia and Iran who redoubled their arms supplies, arms and support for President Assad.

2. The arrogant Zionists have exposed their weakness and are now open to unpleasant surprises as they impotently watch Hezbollah military movements in Syria especially around Damascus. Hezbollah has has open access to advanced missiles and chemical weapons. Missed, for instance, was the major movement by Hezbollah militia heavy units towards the Syrian-Israeli border. Military sources now confirm that a Hezbollah force is currently deployed outside Deraa, capital of the southern Syrian province of Horan. Reinforcements are streaming in from Lebanon. The Hezbollah force and Syrian units are getting ready to move in on the rural Horan and reach the Israeli border nearby through the Syrian Golan.

Instead of growing weaker, Iran’s Lebanese cousins are poised to open another war-front and force the Zionists to adapt to a new military challenge from the Syrian Golan.

Unlike its previous wars against Israel, this time Hezbollah will not confront Israel alone. On May 30, when President Assad confidently spoke of “popular” Arab demands to mount “resistance” operations against Zionist occupiers from the Golan, he didn’t mention Hezbollah because he was referring to demands coming from inside Syria, Iraq and the wider Arab world. Iraqi Shias are playing an increasing role in supporting their Alewite Shia kinfolk in Syria.

Ayatollah Khamenei to West: no concessions from next president

Iran's supreme leader warns ‘enemies’ not expect any concessions from country’s next president, says it will not ease tensions over Tehran’s nuclear drive.

Eight presidential candidates, most of them conservatives close to Khamenei, have been approved by the Guardian Council, a hardline electoral oversight body, to run in the election.

Addressing them directly, Khamenei said regardless of who wins the poll, they should "promise not to attach importance to the interests of foreigners more than they do to those of the Iranians."

He branded Iran's economy, under pressure from western sanctions, as the "main issue" before the candidates.

"Economic problems exist, inflation exists, but God willing the next (president) will resolve these issues.

"If we can shore up the economy, the enemy will be left defenceless in its confrontation with the Iranian nation," said Khamenei, while calling on the next president to build up Iran's "national might" against Western hostility.

Almost all the candidates attended the ceremony at the shrine of the Islamic revolution's late founder, Ayatollah Ruhollah Khomeini, who died in 1989.

Among them were top nuclear negotiator Saeed Jalili, who represents Iran in talks with the so-called P5+1 countries, the United States, Britain, China, France and Russia plus Germany aimed at curbing sensitive aspects of the Iranian nuclear programme. Those talks have failed to produce a breakthrough.

Jalili has vowed, if elected president, to pursue a path of resistance against Western demands.

Sayyed Ali Khamenei insisted he did not have any "preference" when it came to the candidates and called on Iranians to cast their ballots on June 14, saying a high turnout would foil foreign attempts to undermine the election.

"Every vote for any candidate is a vote for the Islamic republic; it is a vote to confidence in the establishment and the electoral process," he said.

It is a speculation to interpret that some Ayatollah Khamenei's sentence was meant to be reference to Mr. Ahmadinejad, because he (President) has worked hard in dificult circumstances doing above average.

The Supreme Leader point was to instruct candidates about realities of the current situation and not about divisions of the society...

"... They (enemies) wish either low turnout in the election or sedition to emerge after the election"...

If we wanted to read IRI propaganda we would have read one of their blog sites.
Are you incapable of independent thought?

Anon 11:20 AM
Over 1400 journalists, from around the world, is going to report on Iranian elections.

Majority of world countries recognizes the Islamic Republic; even Iran's enemies decided to keep their embassies, before they were kicked off for their illegal interference.

And the overwhelming majority of Iranian voters use to participate in Iran's elections and their percentages shun the percentages of voters in the West's elections.

So what are exaples of facts supporting your slogans that "...it is illegitimate...or that no one supports..."?.


I guess if you define the region to only include Iran and the other backward nations of the Gulf as the region, that's true.

Anon 7:52 PM....Lot of journalists visit North Korea but it still a illegitimate dictatorship.
Having the illusion of voting so that the Islamic regime can film people for propaganda purposes and claim legitamacy doesn't make it legitimate in democratic annals.
The overwhelming majority of Iranain people was shown back in 2009 what type of primitive and illegitimate regime is occupying Iranian territory.
The so called "elections" in Iran is a total farce. Therefore they can only be known as selections.

after killing 100,000 of his own people, some would think Assad would have had enough for now. attacking israel would mean the end of his rule over Syria.