India to Invest in Chabahar Port 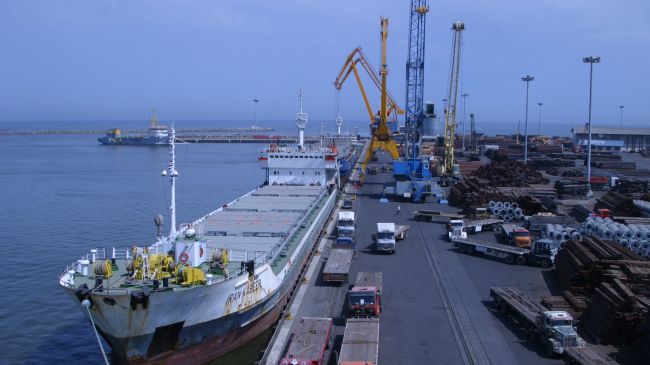 When and if both projects are completed, India can transport iron ore from Hajigak mines in Afghanistan, which an Indian consortium has won its concession, to Iranian border near Mashad and on to Chabahar for sea transport to India, bypassing Pakistan. The ore transport from Afghanistan to India without transshipment through Pakistan was a major challenge for the Indian consortium.

This is another checkmate move by Iran and I had posted a detailed analysis of this a few months back. The fact is Afghan endgame is in full mode and Karzai is taking a punt on Iran and India.

The strategic post of Chah-bahar is his only access to the world as Pakitanis are creating more problems for Afghanistan since the Saudi wahabbi puppet Nawaz Sharif has taken power. This Saudi puppet was the creation of ISI/CIA under the dictator Zia-ul-Haq and these scum brought Takfiri violence to impoverished dirt poor Pakistan in the 80's for a "Jihad" against the Russians at US behest. Now the chickens are coming home to roost.

Pakistan isn't helping the Afghan government end its standoff with the Taliban -- so Karzai is looking to India and Iran instead, the most stable powers in the region.

The militant sanctuaries in Pakistan still go unmolested and the Taliban funede by ISI and the CIA hasve close ties to Saudi/Qatari/UAE funded Salafi groups from Punjab who have also attacked Iranians and Pakistani Shias. These Saudi funded US approved terrorist groups like SSP, TTP and Pakistani Taliban have remained resolutely opposed to talks with Karzai's wavering government in Kabul. Pakistan, ever paranoid of encirclement by its arch-enemy India, wants to keep Afghanistan unstable after the withdrawal of most NATO troops at the end of 2014.

Pakistani military has started directly attacking Afghan border troops on an almost daily basis. The Af-pak conflict is turning deadly, as Afghan soldiers exchanged fire with Pakistani border guards. One Afghan soldier was killed and several Pakistani guards were reportedly wounded. In response, Karzai met with the family of the soldier who died in the clashes and declared him a national hero. The presidential palace then issued a statement on behalf of tribal elders Karzai had met, claiming that Afghan territory extends "as far as Attock," a city located deep inside Pakistan that borders its Punjab province. For its part, the Afghan media which mirrored public sentiment and growing Afghan anger portrayed the events as if Afghanistan were at war with its meddlesome neighbor. (The Pakistani press, by contrast, hardly mentioned the event, preoccupied as it was with its own military approved "election" or US approved selection.)

Then on May 21, Karzai dealt Pakistan the ultimate snub by traveling to New Delhi in search of military equipment that, according to Indian media included 105 mm howitzer artillery, medium-lift aircraft, bridge-laying equipment, and trucks. No public statements have been made specifically addressing Karzai's request for hardware, but sources close to the Afghan president suggest that India is sending a military mission to assess Afghanistan's needs and will most likely provide some of the equipment. After a decade of limiting its $2 billion in assistance to development and reconstruction so as not to irk Pakistan, India seems willing to up the stakes. In New Delhi's calculation, respect for Pakistani sensitivities hasn't protected Indians or Iranians from attacks in the past. Even building a highway cost India 135 casualties -- "one human sacrifice...for every kilometer and a half constructed," as the country's foreign minister put it.

Both Russia and Iran have their own fears about allowing Pakistan's continued support for terrorism and harboring of Taliban and other extremest groups in a volatile country so close to home. It looks like a very powerful Russian, Iranian and Indian axis with tacit approval of China is emerging to end US and Pakistani destabilization in the region.

The Indian-Iranian alliance also will have profound impact of trade relations with oil rich ex-Soviet Muslim republics of Central Asia and the deep-water port of Chah-bahar will be pivot of this alliance.

Syrian rebels are barely clinging on to less than 20% the country in the face of a powerful offensive from pro-government forces and their Iranian and Hezbollah allies, yet continuing divisions and atrocities perpetrated by many of their number threaten to undermine their dwindling cause. This, rather than Russian military hardware or Iranian and regional Shi'ite manpower, is Syrian President Bashar al-Assad's most powerful trump card.

Aging US Senator John McCain who emulating 1980's Jihad champion Charlie Wilson, visited northern Syria from Turkey a few days ago today acknowledged that the "rebels" are losing rapidly. But McCain's trip put him in the center of criticism when pictures of him with an alleged notorious terrorist kidnapper emerged, while acts of brutality uploaded on YouTube provoked outrage even inside the Qatari royal family, one of the Salafi terrorists closest backers (for an Arabic version, if you can read Arabic link below)
http://alkhabarpress.com

No matter how well armed and funded, the "rebels" would find it hard to keep up in a prolonged war of attrition against a determined government force and its unrelenting allies backed by the majority of the Syrian population. NATO intelligence assessments now state that over 70% of Syrians now support President Assad. It is now quite possible that the victorious government side will be able to fully drive a wedge between the rebels and their supporters, it could theoretically win the war.

These developments are accompanied by a powerful offensive in the south and the center of the country conducted by government forces, Lebanese Hezbollah units, and other Shiite and Slavic "volunteers". The regime appears set to recapture the strategic town of Qusayr on the Lebanese border, which sits on the last major smuggling route from Lebanon still in rebel hands. Today, Hezbollah inflicted a painful defeat on the fleeing Salafi terrorists in the Bekaa valley.

It is, moreover, a military gateway to the regional capital Homs. As a rebel fighter put it to journalists, "If we lose Qusayr, we lose Homs, and if we lose Homs, we lose the heart of the country."

The Russian government is also firmly behind Assad, and while there are conflicting reports on whether it has already sent parts of the state-of-the art S-300 anti-aircraft system to Syria, its refusal to cancel the deal and its transfers of other advanced weapons like MIG-29 jets have sent a powerful message to all. Russia no longer seems to be a passive bystander to US meddling in the region and is determined to avenge its Afghanistan misadventure of the 1980's. Looks like Charlie Wilson's ghost is about to haunt US warmongers.

Correspondingly, German intelligence revised its previous estimate that like most western wishful propaganda claimed that Assad's fall was imminent every month, and its head now said that the pro-government forces and their regional allies could likely defeat the rebels.

ISLAMABAD: Afghan Taliban confirmed on Monday that their top negotiators from their Qatar political office have paid a three-day visit to Tehran at the invitation of the Iranian government.

“The delegation led by Tayyeb Agha has now returned,” the spokesman said in a statement. The statement which was in Pashto language also expressed Taliban's desire to improve relations with neighboring Iran which has invested in Afghan economic development and is host to over 2 million refugees.

Yousaf said that another delegation of senior Taliban leaders recently visited Tehran at the invitation of the Iranian government where they attended an Islamic conference.

A Pakistani security official said that the Taliban had visited Iran on several occasions and that Islamabad is aware of the development. Iran's increasing influence in Afghanistan is welcomed by Russia and India much to the dismay of Pakistani military which has been supporting the insurgency in Afghanistan and view Afghanistan as their "strategic depth" in any future conflict with India. There is now growing anti-Pakistan sentiment in Afghanistan even amongst the mostly Sunni Pashtuns who resent Pakistani interference in their war-torn nation.

Iraq: Dire consequences if Israel flies over to strike Iran
Iraq’s Deputy Prime Minister Hussein al-Shaharstani issued the clearest warning to Israel Monday not to use Iraqi air space for an any attack on Iran – or there will be serious consequences. He did not spell them out, but his comments reflect increasing cooperation and policy consensus with Iran on regional security issues. Both Iran and Iraq are staunch supporters of President Assad of Syria. Iraq has recently signed a multi-billion dollar arms deal with Russia.

What can they do? They don't even have an airforce. Maybe use their slingshots?

The most important issue from the Syrian conflict is that the Arabs have lost their fear of dying in battle. Iraq is a huge country with mega-natural resources. It can allow "volunteers" to fight against the Zionist entity and support Iran in various ways. BTW, the Chinese are the biggest beneficiaries of failed US warmongering in Iraq. Iran and Iraq are synchronizing their armed forces and the strategic implications are slowly unfolding. The US/Zionists are in huge trouble in the region and they know it. US manufacturing is dying and its economy now is in irreversible decline and the Zionist entity will not survive the next multi-front war. Iran and Iraq combined have more oil than all the Arab petro-pimps combined as their cooperation at OPEC and global oil markets in obvious to all. The funniest aspect is that the US idiots killed millions and bankrupted their deadbeat economy so China can get all the Iraqi oil and wipe-out third rate US manufacturing. Talk about a nation of retarded imbeciles.

An interesting report in the Jew York Times yesterday:

BAGHDAD — Since the American-led invasion of 2003, Iraq has become one of the world’s top oil producers, and China is now its biggest customer.

China already buys nearly half the oil that Iraq produces, nearly 1.5 million barrels a day, and is angling for an even bigger share, bidding for a stake now owned by Exxon Mobil in one of Iraq’s largest oil fields.

“The Chinese are the biggest beneficiary of this post-Saddam oil boom in Iraq,” said Denise Natali, a Middle East expert at the National Defense University in Washington. “They need energy, and they want to get into the market.”

Before the invasion, Iraq’s oil industry was sputtering, largely walled off from world markets by international sanctions against the government of Saddam Hussein, so his overthrow always carried the promise of renewed access to the country’s immense reserves. Chinese state-owned companies seized the opportunity, pouring more than $2 billion a year and hundreds of workers into Iraq, and just as important, showing a willingness to play by the new Iraqi government’s rules and to accept lower profits to win contracts.

"We lost out,” said Michael Makovsky, a former Defense Department official in the Bush administration who worked on Iraq oil policy. “The Chinese had nothing to do with the war, but from an economic standpoint they are benefiting from it, and our Fifth Fleet and air forces are helping to assure their supply.”

The depth of China’s commitment here is evident in details large and small.

In the desert near the Iranian border, China recently built its own airport to ferry workers to Iraq’s southern oil fields, and there are plans to begin direct flights from Beijing and Shanghai to Baghdad soon. In fancy hotels in the port city of Basra, Chinese executives impress their hosts not just by speaking Arabic, but Iraqi-accented Arabic.

Anonymous June 3, 2013 at 7:36 PM
I think thats what you call poetic justice,altho` thats cold comfort to the families of all the victims of the invasion/occupation,but at least the americans will not profit from their crimes