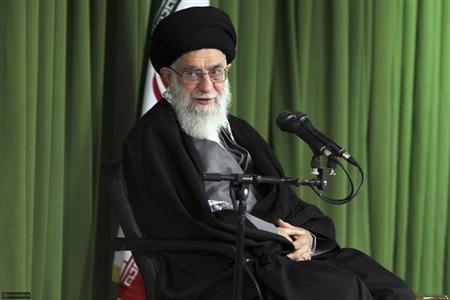 Iran’s Supreme Leader Ayatollah Ali Khamenei said today the dispute over the country’s nuclear program could easily be resolved if the West were to stop being so stubborn.
“Some countries have organized a united front against Iran and are misguiding the international community and with stubbornness do not want to see the nuclear issue resolved,” Ayatollah Khamenei said. “But if they put aside their stubbornness, resolving the nuclear issue would be simple,” he added. (Khamenei.ir/Reuters, 26 June)
President-elect Hassan Rouhani, who takes office in August, has also put normalization of Iran’s relations with outside world at top of his agenda.

I don''t like Khamenie but I think his assessment of nuclear file is close to the reality. It seems the nuclear file is not the real issue but is a mean to put Iran on edge and under pressure for more important strategic gains like Regime change or at least complete behavior/policy change. From Khatami's era Iran gave the necessary means for a compromise (Additioanl protocol in exchange of right for enrichment) but west each time find a way to not make a deal and increase the pressure.

not only is resolving the dispute simple, but Khamenei is as well.

Rahbar is very astute and is stating the obvious. Iran's nuclear status has to be recognized as the ship has sailed.

Iran have every reason to acquire an atomic weapon and they should.

Iran is a defacto nuclear power and most estimates are that it can produce over 30 nukes a year or more. It is no wonder that no power on earth has had the guts to take on Iran despite 34 years of jackal howls! BTW what happened to US/Zionist bluster and yellow belly cowards. LOL.

In a report, Gatestone said Khamenei would use the extra time to complete Iran’s nuclear project.

“Khamenei has again proven what a great master strategist he is,” the report, titled “And the Winner Is…Iran’s Nuclear Program,” said. “He has
succeeded in pacifying the West and his own people, thus buying the time his scientists need to complete his nuclear project.”

Author Harold Rhode said the election of Hassan Rowhani encouraged the West, including the United States, and the presidential-elect would be given
an unspecified amount of time to draft proposals to resolve the uranium
enrichment crisis. Rhode, a former Iranian specialist for the U.S. Defense
Department, said Rowhani is a seasoned national security advocate and a close ally of the Supreme Leader and has supported Iranian nuclear weapons development.

“Moreover, the West could lull itself into believing that since Rowhani
is a ‘moderate,’ maybe he is someone we can deal with,” the report said.
“The election result, therefore is huge win for Khamenei and his clique, and
a defeat for the West and Israel.”

The report acknowledged perceptions in West and Israel that the Iranian
elections were fair and free.

Yes, North Korea demonstrates that nuclear weapons are a deterrent to the so called "freedom and democracy" wars of the USA.

Yep, it should be obvious to everyone since the Turkey-Brazil proposal of 2010 which the US immediatly blocked.