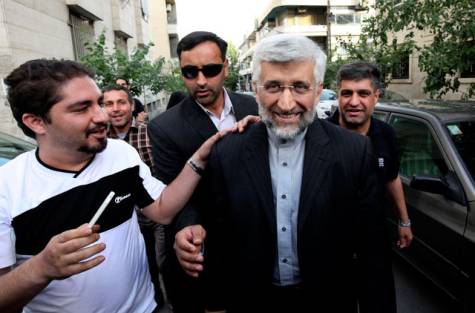 “There is every reason to be hopeful that elections may well open the door for a full resolution of Tehran’s nuclear impasse.”
A perspective by Peter Oborne and David Morrison/Guardian News & Media Ltd/Gulf News

Peter Oborne and David Morrison are the authors of A Dangerous Delusion: Why the West is Wrong About Nuclear Iran

Yes indeed, this post is FUNNY! There is ZERO chance of any "breakthrough" as long as the Zionists control the deadbeat US as their hostility with Iran has nothing to do with the "nuclear program" but about maintaining a delusional Zionist hegemony in the region as US decays into oblivion. The US is now a pathetic POLICE STATE that is embarrassed and hated globally. Iran will just stay the course and do whatever it takes to defend its interests. Iran has been around for 3000 years while the dead carcass of failed US police state is collapsing in mere 200 years. GO FIGURE!

To end the standoff, for a what price and WHEN ??

It is not about nuclear standoff but about attempts to subdue Iran to a second class country, where society will "discuss" about gay rights, same sex mariagges and freedoms to drink alcohol in "taverns" with backyards, as well as about proposals that scientists can work somwhere else.... and send their money to their relatives.

Statements by V. Nuland show that one of the additional requirements will be a suspension of the space research, because Iranian development of rockets will "violate" an UN "resolution".
It will also require that the Persian Gulf Island's status has to change....etc.

Let's hope that there will be a miracle....

Read the history books and you shall realize how identical the approaches are.

Iran knows and acts accordingly, West shall not give up on its intimidation and Iran should not give up resisting. Iran should carry on defending its interests beyond its borders and should be aware that the Western 3 (US,UK and France) plus 1 (Israel) are not interested in any compromise, They want Iran disintegrated into 10 countries they can control.

Iran's problems starts and ends with Israel (like it or not), even my Jewish father in law agrees with me on this and the bugger lives in Israel on my bloody pocket money.

Azari by fortune, Iranian by grace of God.

Anonymous June 6, 2013 at 10:29 PM
Exactly,the nuclear standoff is just a pretext,one of many,the real problem here for the west is an independent assertive iran that is a regional power that not only does not bow down to the west,but in fact seeks to remove the influence of the west from the region.There is always the faint hope for a "nixon goes to china" grand bargain,but that would entail the west acknowledging iranian power and its legitimate interests in the region and so far there is no sign the west is willing to do this,even a detente would be a defacto acknowledgment of iranian power,so for now we have a cold war as the west tries to maintain its crumbling status quo in the region.Time is on irans side

Rather have a "Royal dictatorship" than a mind controling religious bigoted fascist state that tells you what you should wear,eat,think,act and say.You are a low life religious fascist bigot and hypocrite.That's why you live in England and lording it like a true mullah boy,while Iranians are starving and persecuted by the worst regime in Iran's history since the Arab invasion.

Anon 5:45AM
I second your thoughts and thank you for your answer.

I believe that it is a sad fact, that the intelectual level, (at the very bottom), of majority US voters cannot comprehend that they could benefit from lower oil prices, at all levels in their stores, and increase health of their economy be selling, for instance. their Boeings to Iran.

The same thing applies to US' policies with the DPRK.
Why they don't want cheap goods from the North Korea in their Wal Mart stores ?.
Why they continue economical exchange with (Communist?) China but refuse to do the same with the DPRK ???

Anonymous June 7, 2013 at 5:43 PM
Sadly for you the iranian people do not seem to agree with you,they made it quite clear that they wanted an end to the shahs dictatorship