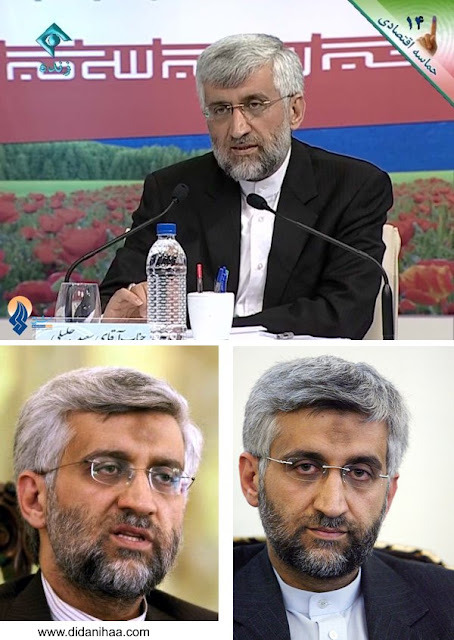 Presidential candidate and Secretary of Supreme National Security Council and chief nuclear negotiator Saeed Jalili has changed his hairstyle (above) to cover piety mark caused by too much prayer.

From a twit by Scott Peterson (@peterson_scott).

Photo credit: didanihaa.com/news.gooya.com, 1 June.
Posted by Nader Uskowi at 3:00 AM

I am not a medic per se and no doubt Jabar will correct me on this, but I don't think this is a piety mark caused by too much praying. It is probably a pigmented birth mark. Repetitive and prolonged resting of the forehead against the praying clay tablet may result in fibrosis of forehead skin rather than pigmentation.

of course without further examination it's impossible to firmly establish that it's due to Kaposi's sarcoma, usually found only in AIDs cases, and let's hope that it hasn't progressed that far.

It is a well known fact in Iran that these people use a hot object (they have been doing this for generations to fool the people) many times a hot praying clay to burn a so called "piety mark" on their foreheads.

TEHRAN, Iran (AP) -- Iranians have seen it before: A youngish presidential candidate firing up crowds with fist-waving rants against the West, then displaying his Islamist bona fides with courtesy calls to hard-line clerics.

Saeed Jalili, familiar to outsiders because of his prominence as a nuclear negotiator, has tried to distance himself from outgoing president Mahmoud Ahmadinejad, who has fallen out with the clerical leadership that controls Iran. But he is employing the same strategy that worked for Ahmadinejad eight years ago - and in the murky world of Iranian politics, where there are no credible polls and elections are a highly controlled affair, it has made him, for many, the presumed front-runner.

"No compromise! No submission!" shouted supporters at rallies this week that had men in front and women segregated in the back.

Perhaps more than any of the other seven candidates allowed to run by the clerics, Jalili presents a riddle: A negotiator who seems to dislike give-and-take; an opponent of international outreach who nonetheless noted in a 2006 interview that Iran's "big question" is whether it can ever restore relations with Washington.

The answer, judging by his statements ahead of the June 14 vote, may be: Not necessarily.

"I'm opposed to detente," he declared at one campaign stop. "The principle for us is to counter threats - not rapprochement. We have to implement the discourse of resistance in society."

In an attempt to showcase his piety, Jalili traveled to the seminary city of Qom, where he respectfully adjusted a microphone Wednesday for Ayatollah Mohammad Taghi Mesbah Yazdi, once considered the spiritual mentor of Ahmadinejad. A day later, he told a women's gathering to shun Western ways and embrace motherhood as their "core identity."

Among the public, Jalili is admired as a "living martyr" for losing part of his right leg in the 1980s war against Saddam Hussein's Iraq, then backed by the United States, which left him with a noticeable limp that lends enormous status.

The 47-year-old Jalili - who looks older with his white hair and beard - was the clerics' trusted point man during years of fruitless nuclear negotiations. While the clerics - not the president - set major policies such as foreign relations and nuclear, a Jalili presidency would align with an unyielding approach in possible nuclear talks with the U.S. and other world powers after the election. Four rounds since last year have made almost no headway.

The West believes Iran is seeking to develop atomic weapons, although Tehran denies that.

More woman will like him, that new way and Mr. Aref's stunt, during his presidential debate, where he wore bright suit and almost shaved beard, will be neutralized by Jalili's new (younger) appearence..

Yes, by reading the Farsi media it appears that Saeed Jalili is way ahead in polls, especially amongst the youth and women. He may pull in the majority vote like Ahmadinejad. However, he is a far more sober and stable man.

The forehead spot is a sign of piousness in Iran/other Shia societies,(not sure if Sunnis use prayer stones) caused by intensive prayers and resting and pressing ones forehead on the prayer stone/clay -> (it is made of earth from a special place like Mecca,Karbala or other such places).

Usually you can distinguish authentic religious people from pretender dudes. ;)

The worst for of Islam after Wahabism is Shia Islam that makes either Liers / idiots of gaulible people.

The forehead spot as correctly explained by Anon 5:34 PM was done by the simple use of hot stone as practiced by countless fraudsters in the Islamic religion.
They use this trick to deceive the public into believing they are "pious".

The authentic religious types don't have to pretend they are pious unlike the types that are the representatives of the Islamic regime :o)

A Saudi prince spent 15 million euros ($20.41 million) for three days of fun at Disneyland near Paris to celebrate his degree, the group that runs the theme park said on Monday.

Prince Fahd al-Saud booked entire areas of the park over May 22 to 24 for his 60 guests, who included friends, as well as diehard Disney fans and bloggers.

The prince had fun. He was there all along, but we are not allowed to speak about him, that was the order.

This news of Saudi royal corruption and frivolous spending comes at a time of the kingdom's sensitivity to the Arab Spring and growing poverty in the once oil rich family run fiefdom.

But the shaw n shaw beat the Saudis hands down by spending $200 million (todays value $3.8 billion) on the Persepolis mega farce.

Please tell us more about the (3000 billion toman) case in IRI that the (supreme leader ordered the newspapers to stop writing about) as you seem to be very well informed about these cases. What about the truck load of gold driven into Turkey?

Yeah the mullah boys forget the truck loaded with gold that has never been seen agian.Under Turkish law money or gold imported into the country without legal transaction is confiscated. Good bye Iranian gold!

Anon 7:49 PM It's better to spend millions of dollars promoting Iranian history and culture instead of spending billions of dollars on terrorists,Assad and Hezbollah.The money the Shah spent included the giant sports complex and main square in Tehran as well as other projects which are in use to this day.
Your so dumb you can't see that.So far Islamic terrorist regime has taken $20 Billion out of Iranian nations mouth and given it to Assad to try and save his ass from Syrian people.

Even if the Shah's regim was suffering from corruption, it stills dwarfs in comparison to the looting Mullah thocracy. His regim had a few dozen corrupted officials. We are talking about a few thousend thieves in the IRI regim who are corrupted and stealing.

The Pahlavis were a bunch of mentally degenerated "Dahati". Handpicked by the British to replace the notoriously incestuous and physically degenerated Ghajar dynasty.(look at the GHajar descendants..Hardly taller than my German Shepherd)/( For they kept marrying each other, at the end you could not differentiate between Ghajar men and women). Not forgetting, the Pahlavis got the throne because "Mirza Kuchek Khan" refused it.

The democratic efforts of the "Mashrute Revolution and Mossadegh era", and the coups that resulted in Royal dictatorships in Iran proved Monarchies is/was not only wrong for Iran, but probably wrong for our time everywhere (even here in the UK)

So, whatever we might believe to be right or wrong for Iran, The MKO and Pahlavi (monarchy) are the two absolute wrong alternatives. Any sort of republic is better, even a religious one.

Azari by fortune, Iranian by Grace of God
Dariush London

monarchies are bad, but that does nothing to justify a theocratic dictatorship,

just as a physically degenerated Ghajar dynasty, does nothing to make savory your relationship with a German shepherd.