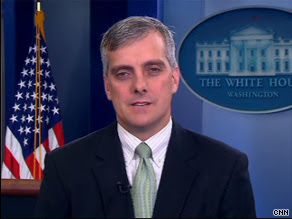 “If he (Rouhani) is interested in, as he has said in his campaign, mending Iran's relations with the rest of the world, there is an opportunity to do that,” said Denis McDonough speaking on CBS's “Face the Nation.” (CBS/Reuters, 16 June)

“If he (Rouhani) is interested in, as he has said in his campaign, mending Iran's relations with the rest of the world, there is an opportunity to do that,”

Apparently the 120 countries that make up NAM and support Iran's nuclear rights are little countries without significance in McDonough's book.

Do not ever believe in the world's most poisonous double-tongued snakes of the Zionist-backed U.S. and its life-term master of Israel. Never!

Aka the "Turd World".

of course, people shouldn't say that you're full of snot and blowing out wads of idiotic and simple-minded conspiracy nonsense.

let us know when it's time to change the diaper for you.

drink all your kool-aid.

And all iran has to do is surrender unconditionally and become just another "arab" puppet state like it was back in the good old days under the shah,bloody pathetic

Those turds are hasbarats, internet activists hired to shill and post propaganda (hasbara) for the zionist regime.

Regardless of you anger and slogans The US and Europe are the ones that count.
I don't like the state of Israel because of its policy toward the Palestinians but you have got to admire the Jews for (Majority of them) being well educated, smart, and supporting each other when faced with external threats, so barking Usraelis will not change anything.

The problem is not jews its zionism,not every jew is a zionist and not every zionist is a jew.As for the europeans they were ones who made the choice to tow the us line,at great cost to themselves,and throw away billions in trade and decades of good relations with iran so I seriously doubt there will be any rapprochement between iran and the west,short of a western back down,the cost to iran is simply to high.Usrael describes perfectly the two headed monster and its plans and goals for the middle east,when it comes to both of them there is almost nothing separating them as far as policy on iran is concerned

The United States is witnessing its final days as a colonial empire, with the so-called ‘War on Terror’ failing to rally support and harvest change, a US activist says.

“Everywhere in the world, in the Middle East, throughout Arab and Muslim countries and now against China, [the United States is] trying to make military threats to reverse their declining position - but it will not succeed, really, the days of empire are long gone,” Sara Flounders, the co-director of the International Action Center from New York City, told Press TV in an interview.