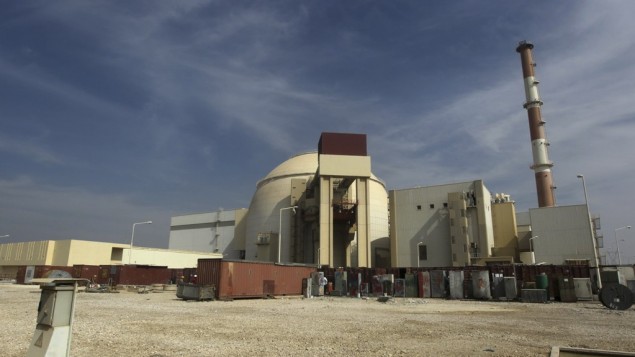 Several IAEA member-countries are reporting that Bushehr nuclear reactor was damaged by April 9 and 16 earthquakes, with long cracks appearing in at least one section of the structure, Associated Press quoted two diplomats as saying.

IAEA reports in February and May said it had been informed by Iran that the Bushehr reactor was shut down, without specifying why. Saudi Arabia cited Bushehr as a safety concern Tuesday at a session of the IAEA’s 35-nation board.
But Tehran insists the plant is technically sound and built to withstand all but the largest earthquakes unscathed. They are offering the reasons for shutting down the plant.
Iran is the only country operating a nuclear power plant that has not signed the 75-nation nuclear safety convention, which was created after the 1986 Chernobyl nuclear disaster. While IAEA inspectors occasionally do inventory of nuclear material at Bushehr, they do not have a mandate to conduct safety checks.
Iran is located in a zone of tectonic compression where the Arabian plate moves into the Eurasian plate, leaving more than 90 percent of the country crisscrossed by seismic fault lines.
Nine quakes that hit the country in the last few decades were bigger than magnitude 6.0, including the 2003 temblor in the city of Bam.
File photo: Bushehr nuclear power plant (Mehr News Agency)
Posted by Nader Uskowi at 10:56 AM

A piece of shit built by the Russians.

Let me get this straight: building nuclear reactors in a Third World country with a history of earthquakes in recent years that have caused tens of thousands of deaths makes it probable that present and future earthquakes will damage these reactors? Are you sure about that?

It has already been denied by Rosatom:

AP is always citing anonymous 'diplomats' of countries in the 'region', we know how that worked out last time:

And even if true, the original AP article states that the reactor core remains undamaged.

zounds, but your understanding is limited.

"... the reactor core remains undamaged." by the April earthquake, but the quake near the reactor was not a major one.... what happens when instead of a 6.3 quake, there's one in the 7.8 magnitude?

This Russian piece-of-garbage is money very well-spent. It took forever-and-a-day to build, and it's "under repairs" half the time. But then again, it's not like the mullahs are spending their own money. Oh, well.

Is it correct information, or another attempt to sow (ooze) enemie's propaganda under hypocritical "concerns"?.

UTTER RUBBISH by US/Zionist LOSERS and perhaps the information was concocted by the NSA/Verizon data mining.LOL. The FACTS are:

A Russian official announced that a recent quake that struck Iran's Southern province of Bushehr has not affected the country's Bushehr Nuclear Power Plant.

Another FACT is that the US/Zionist LOSERS have egg on their ugly faces as 34 years of every evil against Iran has FAILED, so these morons have to make-up crap as they get their dumbarses kicked from Syria to Af-Pak.

The denial and the anger exhibited by some commentators here, ares the height of ignorance by the usual sloganeering crowd. Instead of concerns over the safety of the nuclear plant and the well being of millions of people in the region, and typically without any hard information, they try to make even an earthquake-related event into a political crusade. I am sure that the officials of the Islamic Republic are taking this development seriously and that’s probably why they have shut down the reactor. To those commentators, let me say with friends like you, the Islamic Republic does not need enemies!

Congratulations for an examplary and the best effort(s)...here and at other articles.

Nader Uskowi June 7, 2013 at 1:36 AM
Considering the past history and reliability of "unnamed western diplomats" when it comes to iran and its nuclear program,I`d take anything said by them with a very large grain of salt[about a salt mines worth actually].Reactors are safely operated in earthquake zones throughout the world and Iran is no acception,indeed the bushehr reactor is one of the safer and more modern ones in operation.Personally I think the anger of some of the commentors here is quite understandable Mr Uskowi especially when you base this whole thing on the unproven claims of "unnamed western diplomats" whos agenda is dubious at best[thats me being generous],it makes me laugh that you have the arabs being supposedly concerned over irans reactor yet the minute iran built one the arabs scrambled to follow suit and build reactors of their own,no doubt so as not to look to backward compared to iran,I`d say thats evidence of more than a little bit of cultural inferiority going on there not to mention a little bit of hypocrisy.As far as I`m concerned this is no different to all the other unproven claims relating to irans nuclear program made by the west and deserving of the exact same level of contempt,if these "diplomats" have any proof let them present it,as usual the burden of proof is on the accuser

The fuss about the damage is an excuse to get some new faces as inspectors into the country and thus mark new faces and names for assassination by Mossad.

I do suggest we give the Iranian "some" credit for not allowing their intelligence to be so openly insulted.

But what do I know, its not my blog and not my facts.

My understanding is everything but limited, but bickering with you has no point, we should wait for the official IAEA response, just like last time:

Don't worry, you're living in London not Iran. The safety of that piece-of-garbage Russian reactor is immaterial when you live at a nice, comfortable distance of several thousand miles away, right?

Anon 5:01 AM...Stupid comment.The fact that the reactor is a Russian built piece of crap doesn't mean I support any leader.But I must admit that any regime is better than the present dictatorship.

Well said Anon 7:19 AM. All of Iran's enemies are trying their best to put a shine on this bankrupt regime.

Anonymous June 7, 2013 at 6:01 PM
There is nothing crap about it,it is a safe and modern design,if it had been the less modern german one from the shahs reign would you still be calling it crap.The mistake that the government made was insisting that the left over bits and pieces from the unfinished ist bushehr reactor from the shahs time had to be used,this needlessly complicated things,it would have been far more sensible to either bulldoze the site and start from scratch or select a new site and leave the old one as a monument to the failures of the shah.The russians underestimated the time it would take due to the level of damage done to their nuclear industry because of the collapse of the soviet union,throw in the attempts by the west to bribe suppliers of components to cancel deals,russian suppliers who thought that this might be their only chance to make any money and so jacked up the prices and at times the russian government looking like they might try and pull the same shit they did with the s300s,throw in a lack of qualified engineers and also delays on the iranian contractors part then combine all those things and its not so surprising that it took as long to get built as it did.Now personally I think the russians should have got down on their knees and thanked iran for saving their nuclear construction industry after all at that point in time who else was going to buy a russian reactor,but then its not like iran had a lot of choice in who it could go to the west was not an option for obvious reasons,not that iran didnt try mind you.I think the lesson here is clear Iran has little choice but to rely on itself for the development and mastery of nuclear technology just as it has done for many other technologies,tho one possible partner could be the dprk who appears to be progressing with light water reactors,the other options would be heavy water or gas cooled types,these are not as efficient as light water but they do have the nice by product of producing plutonium and this would be of great value for irans japan option and would be a lot quicker to turn into [potential] bombs in the event of any usraeli stupidity

The only "monument to the failures of the shah" should be that he failed to grasp what a bunch of scum amd filth the mullahs really are therefore failed to eliminate them.

Yeah and the dogs you're refering too are the losers that are living in London and claiming to support Iran from afar.

Anonymous June 7, 2013 at 10:24 PM
The people of iran felt differently,they wanted him gone