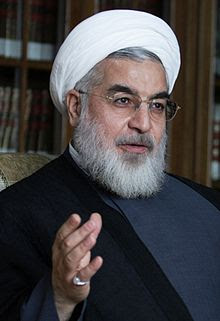 Hassan Rouhani, representing the reformists and moderates in Iran’s presidential election, scored an impressive first-round victory over his conservative rivals. Rouhani received 51 percent of the votes.

Rouhani’s convincing win was indeed a clear victory for the country’s reformist movement and a rejection of eight years of extremist policies of President Ahmadinejad.

As a first voter in 1997 election, I saw how our young society is getting more mature and pragmatic! The sole fact that despite all pressures and problems people of Iran realize that the only way to improve the system and Iran is through an inclusive process in which we should try to bring our more conservative people into the reformist circle is very promising. Iran will not become a free society until all people, including conservatives, wants it. Rowhani (and even Mousavi) are very good examples that show how people and freedom seekers can change a person toward a more reform mind one

The Iranian people have spoken loudly and decisively that they want political reform.

Me: Hello mother
Mother: Hello dear son.
Me: Have you voted yet?
Mother: Yes I have.
Me: Who did you vote for?
Mother: Ghalibaf
Me: Ghalibag? Why Ghalibaf?
Mother: He is a technocrat, a better man to run the country
Me: How about the rest of the family?
Mother: They all voted for Rohani - hypocrites!
Me: Not hypocrite mother - they are pragmatic
Mother: They say they don’t want mullas running the country and then go vote for one!

Historic break down of islamofascism(Jalili) in Iran

Happy with the result. A very high voter turnout and a Rouhani win. I now dare hope once again for improved relations between the United States and Islamic Republic of Iran.

Congrats to President Rohani of Iran !

Now everyone has the duty to support him.

Enemies who counted on riots and a revolution, suffered HUGE defeat, and try to distort results of Iranian elections to their consolation and propaganda purposes.

Ayatollah Rouhani is not an outsider, but member of the current establishment of the Islamic Republic, who has acted against outside enemies of this system.

Enemies have suffered defeat because they counted for a revolution or claims of frauds as well as to blame the Islamic Republic with their old pretexts..
However, the present results of Iranian election will cause for the foreign enemies the biggest headaches, because Islamic Republic and its allies will gain additional time to upgrade their defense capabilities and the Iranian military personnel will also get time for their overdue rests (for a while).

New administration will have time to implement economical reforms, as opposed to the enemy's wishes, and advance Iran to more independence in that economical field too.

Based on the present assessment of the international situation and incoming outcomes, Russia will be the first country to abandon sanction's policies before the next US presidential elections....

You were against Rohani or are you just a member of Hezbeh bodd?