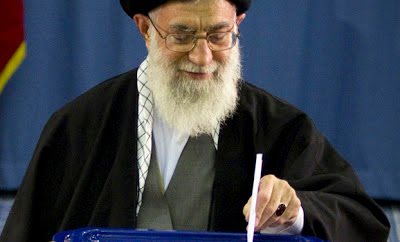 Iran’s Supreme Leader Ali Khamenei asked Iranians to cast their votes in Friday’s presidential election. In a historic departure from the past, accentuated by a call for patriotism, Khamanei also asked those Iranians who might oppose the Islamic Republic to cast their votes too, in support of their country.

“My first recommendation is for an enthusiastic presence at the ballot box. It’s possible that an individual for some reason may not want to support the Islamic system, but he wants to support his country. Everyone must come out and vote,” Khamanei said. (ISNA/Al Monitor, 12 June)

“No one knows the divine fate of the nation on Friday,” Khamenei said. “However, the more votes the elected individual receives, the more strength he has to stand against the nation’s enemy and defend the country’s interests.”

How can he (when selected) stand against you ?

Wasn't this man who is calling on patriotic Iranians to "vote" the main man responsible for the Cinema Rex fire that led to the deaths of 400 innocent Iranians?

Long live IRI and Rahbar and today's election and high turnout will prove that FACT. It is laughable to see self-hating exiles who have not set their runaway feet in Iran for decades to be "commenting" on Iranian issues. Once again the anti-Iran delusional set are in for a great disappointment by the GREAT ISLAMIC REVOLUTION.

The IRI will live as long as your 80 year old "Rahbar".Your pitiful attitude towards the suffering this old man and his cronies have caused for the Iranian people shows where your loyalties lie. Not for Iran but for a militant religious dictatorship which has nothing but pure zealotry to force down peoples throats.You're a disgrace.

The Great Super-Duper Islamic Revolution is so Great and so Super-Duper that I cannot possibly be bothered to actually live under the rule of Islamists (choosing instead to live in the Decadent, Satanic Evil West). Nice, eh?