Rouhani Holds Talks with Rafsanjani on Formation of New Government 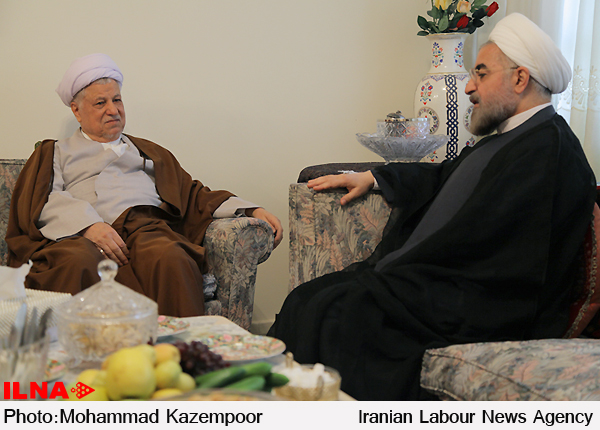 Iran’s president-elect Hassan Rouhani today held talks with Ayatollah Hashemi Rafsanjani on the formation of his new government. The Iranian news agency ILNA quoted Rafsanjani as saying that the happiness and hope generated in the country as the result of Rouhani’s historic victory in last week’s presidential election, especially among the youths, will serve as irreplaceable source of support and capital for the new government. Rouhani in turn thanked Rafsanjani for his support and sound advice, ILNA reported.

The vote by the Iranian people should serve as a reminder to all commentators of the “left” and the “right” that the country is ready to move on after eight disastrous years of Ahmadinejad’s sloganeering (and similar sloganeering on the “left” as seen here) and the nation is ready to bring some normalcy back to the life of the people and reclaim its lost stature.

Hear the story of how this nefarious regime treated one out of many of its wartime heroes as well as the real saviors of Iran.

Come om Uskowi you seem to believe in your own slogans sometimes.These guys job,be it Ahmadinejad or Rouhani is for the preservation of valih-e-fagih and continue in robing the country blind.This regime has not the slightest interest in giving normality back to the people.Because from the begining the regime thrives on confrontation.Mark my words nothing will become of Rouhani in office except four more years of the same old thing.In any case,I wish those innocent people who voted within a corrupt and barbarous system all the luck in the world. Because with this type of regime they will need it.

Unless I am missing something that seems so obvious to you, I do not see any viable alternative, except sloganeering, being put forward by the opposition. Do not even know who the opposition is, and I do not mean to belittle anyone’s beliefs, but absent any viable opposition alternative, how could you ask people not to vote for a moderate agenda as compared to eight disastrous years under Ahmadinejad? The people voted for betterment of their lives, lifting of sanctions, and normal relations with the world. They proved once again how intelligent they are.

There were no disastrous years by the Ahmadinejad's faults in general.
Instead there were many scientific, military and social achievments..

You have to measure disastrous events and achievments with their relation to economical war and sabotages and conspiracies concoted by the worst evils of humankind...

For those who are not capable to comprehend, one description that they don't (evils) want the IRI to show the world that one doesn't have to be zionist's puppet to send its citizen to the space or Universe.

You wouldn't even know the meaning of "comprehend" if it struck you on your head.

The vote by Iranians should remind all those under dellusions of zionist supporters' wishes and lies, that the Iranian nation supports the Clerical establishment and has expressed trust in It by overwhelming participation in the election process.

There was a choice for Mr. Aref, who was educated in the US and is a secular person, and Reformists had instead decided to leave only a cleric for a public choice...

The Principlists had fielded many candidates in order to determine, who will be their strongest choice for the next elections...giving a way for Reformist's candidate who will gain time, for the Nation in Its fight against enemies...

The real "enemies" are the ones fleecing the country.