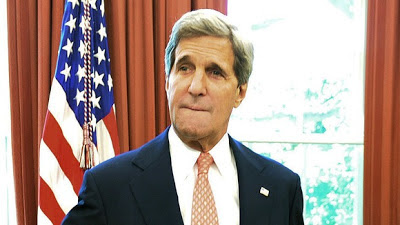 Secretary of State John Kerry said today the U.S. is ready to engage directly with the new Iranian government.

“We, along with our international partners, remain ready to engage directly with the Iranian government,” Kerry Said. “We hope the (Iranians) will honor their international obligations to the rest of the world in order to reach a diplomatic solution that will fully address the international community’s concerns about Iran’s nuclear program.” (AP, 15 June)

Kerry also lauded the Iranian people who voted in the country's presidential election for their “courage.”

Kerry called on President-elect Rouhani to keep his promises made during the campaign to expand freedoms for all Iranians.

“President-elect Rouhani pledged repeatedly during his campaign to restore and expand freedoms for all Iranians. In the months ahead, he has the opportunity to keep his promises to the Iranian people,” Kerry said.
Photo credit: U.S. Secretary of State John Kerry. (Olivier Douliery/ ABACA USA/Empics Entertainment)
Posted by Nader Uskowi at 12:54 AM

Iranian people need not this arrogant bastard to congratulate them. If you are a politician, send your respects to the president elect instead of babbling the same BS.

Mr. Kerry should say something new about My Lai in Vietnam, because I don't know whether his words in the past carried a truth and senses.....

S. Hussein killed 156 villagers for an "attempt" to kill him...
How many villagers (women and children) were killed in that My Lai (or My Ly)

“We hope the (Iranians) will honor their international obligations to the rest of the world in order to reach a diplomatic solution that will fully address the international community’s concerns about Iran’s nuclear program.”

Thanks Mark. Can't someone tell this stupid administration that that is not going to happen. I think the problem of arrogance towards the non-West is a deeply rooted psychological complex.

What a so-called U.S.'s bullshit!

Iranians does not need the Zionist poodles to congratulate them. US is a failed police state and has nothing to offer but warmongering and snooping. US is on a road to nowhere and Iran is marching ahead.

I agree, Rohani should use similar language but stay pleasant. No point wasting time with Kerry and Obama as neither of them can easily reverse the sanction without going to the Congress. Rohani needs to start the charm offensive on the European front, starting with Germany, Austria, Italy and then move on to Russia and China.

so sad to read your words and note your bone-deep ignorance, ahistoricism and inability to understand the term "police state".

get better soon and good luck.

reader June 16, 2013 at 8:47 AM
Why bother with europe,they made it very clear that they wanted nothing more to do with iran,irans future clearly lies with the non european nations not the west

Anon 12:06
Iran needs access to a first-world market to build its economy. The second-world asian economies are not in a position to offer Iran the kind of technologies it needs to build a modern non-oil based manufacturing economy.

And they made it quite clear that they are not interested in working with iran even at a time when they needed all the foreign trade and cheap energy they could get,when it came to iran they preferred sanctions to trade even tho` they payed a high price for this policy.Iran can find the technologies elsewhere or it can develop them itself it does not need a west that has shown itself to be completely untrustworthy,irans future does not lay in working with the west