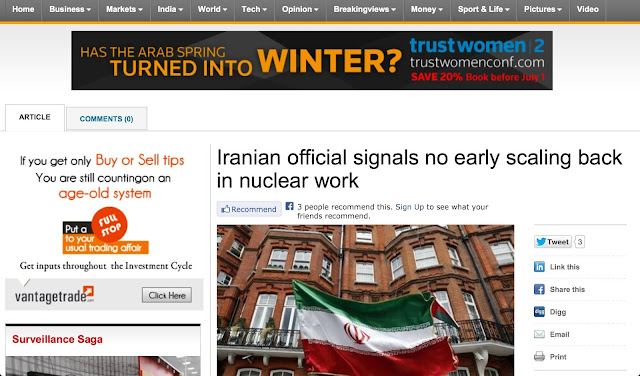 According to Reuters (June 28, 2013 Saint Petersburg), the head of Iran's atomic energy agency, Fereydoun Abbasi-Davani, says that the election of president Rouhani will not bring about any change in Iran's nuclear policy. Iran will continue its uranium enrichment and work on plans to develop more nuclear power plants (1,2). 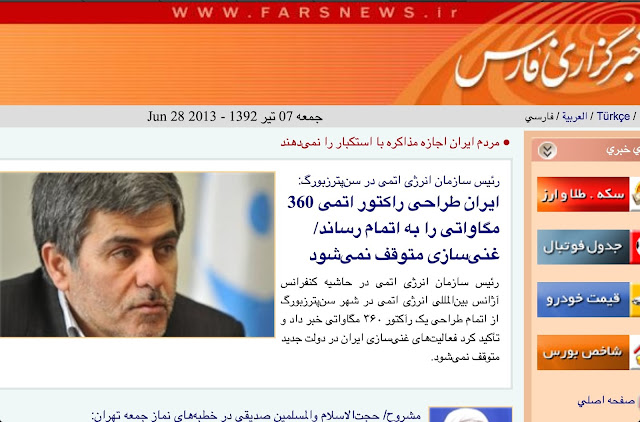 The Iranians are outright stupid if they won't build a functioning nuclear warhead and test it. An atomic weapons capability is the only deterrence against an invasion. Does anybody recollect how the U.S. and EU tricked Qaddafi into abandoning his nuclear program in exchange for supposedly re-establishment of ties and economic incentives... we all know how it went after that.

as to be expected. Iran isn't going to simply stop enrichment.....despite the obvious fact that Iran hasn't the slightest peaceful, civilian need for any more enriched uranium.

Iran has a total of ONE nuclear power plant and, despite the official bullspit about plans for others, it takes a dozen years to build one .... and Iran hasn't started building any (if they had, you can bet your bangles that the fanboy would have posted 16 pictures of the hole in the ground and three artist's drawings)....


there's just no need for more enrichment........ other than to make bombs.

What's wrong with Iran having the A-bomb? Would you rather see your country be invaded and laid in ruins like Iraq or would you rather prefer it had a garantuee or immunity against that kind of violation?

the first thing that's wrong is that Iran has repeatedly insisted that it doesn't want nuclear weapons.

secondly, and more importantly, Iran's government has signed formal legal documents alienating from Iran the right to try to assemble or to assemble such weapons.

and finally, the only reason that anyone is going to try to invade Iran or bomb parts of Iran and leave it in ruins is because of these damned things.

http://www.youtube.com/watch?v=UdQ-ON4lyJs --- Noam Chomsky and the Leveretts on Iran and US foreign policy.

How many nuclear power plants do Israel or Pakistan have?

Iran has been already invaded.
An "invasion" of mullahs and their minions.

No KIDDING SHERLOCK! Dr.Rohani is one of the original Islamic Revolutionaries and like we adults who post here, it has been posted many times that as key member of the National Security Council, his views are more hawkish on Iranian power and national strategic policy than even Ahmadinejad. The only difference is that he is more suave, sophisticated and speaks 6 languages including Russian, German and French, not to mention Arabic and English so his message will passed with a smile. What the out of touch exiled fossils do not understand is that Iranian foreign and defence policies have not changed since the time of Cyrus, i.e. Persian influence on the region and the global stage is paramount. Dr. Rohani will continue on the path of Persia's rising power and manifest destiny as great nation. Iran has nukes and will have more and as Imam Khomeini wisely said, NO ONE (US/Zionists)CAN DO A DAMN THING ABOUT IT! So there and tammam shod.

No surprise. What Rouhani potentially represents is a an opportunity for the West to make a deal with an Iranian leader that's not as polarizing a figure on the world stage as his predecessor.

But if anyone thinks the Iranians are going to outright surrender their nuclear rights, well they haven't been paying attention for the past 12 years.

As the Leveretts point out, an agreement could be made with the Iranians in a matter of weeks if in exchange for Iran's adoption of stringent insections. our American leadership recognized Iran's nuclear rights and retracted sanctions. It really is that easy. Perhaps Iran's new face will make this politically palatable, we'll just have to see.

ho many treaties have they signed that governs their nuclear programs?

how many dishonest Ayatollahs do they have swearing that they're not doing what they are doing?

Mark, Iran has to defend its interests as US policy and government has been hijacked by AIPAC and global Zionism. US/Zionist hostility has nothing to do with Iran's nuclear program but is based on their delusional hegemonic aims for the region. Iran is the only coherent and powerful impediment to that. Even if an angel came to power in Iran, US/Zionist hostility will not cease. US is now increasingly irrelevant to the global power equation as Snowden and General Cartwright cases show. US snooping police state is facing both internal and external challenges. Iran will simply carry on with its goals in the Asia centric multi-polar world. The encouraging thing is the new strategic consensus and partnership between Iran, Russia and China and with Indian views not that divergent either.

And they kicked your bottom out of the country. That is perhaps why you feel so angry. Anyways, we prefer mullahs and their minions to foreigners and their tamed dogs.

Anon 5:45
Read your reasons again. It's the most childish argument ice encountered ever. Iran "should not" have a bomb because they said they don't want it and they signed papers. So what? Do you know any other government more hypocritical than the US or England? This is politics dude and and survival is at stake. It is not a competition of who is the most honest of all.

As you mentioned in passing Mark, I believe Rohani is providing the best opportunity for the west to step back without being psychologically damaged. I believe by now they have realized that their position against Iran along with their sanctions is not effective enough and they just need an excuse to accept iran's nuclear capabilities. Rohani will provide the west a way of the corner they have painted themselves into, not a chance for Iran to retract fr its positions.

A senior source in the Russian Air Force told to Moscow website Telegrafist that Russia had plans to bomb Qatar and Saudi Arabia.

He claims that the combat mission can be done by a unit of Su-27s, as well as by modern bombers Su-34s with extra fuel tanks, accompanied by the Su-27s.

On the question when and why these plans developed, the Russian Air Force officer replied:

Saudi Arabia is a key US ally in the region, not Israel, as many suggest, namely the regime of King Abdullah who is willing to get involved where you want to please his masters, so of course the Soviet Union was preparing plans for the destruction of this regime because without it Saudi Arabia will no longer be an integral state and Washington will get hordes of barbarians who destroy their bases by using the same US military hardware.

The Russians also claimed they needed no more than 24 hours for the entire operation to destroy the ruling circles of the two monarchies from the air.

Iran says it can fully meet its need for nuclear power plants through cooperation with foreign companies while employing Iranian experts to complete and equip the facilities.

Abbasi added that Iran plans to increase its nuclear power output to 20,000 megawatts in the future.

Abbasi stressed Tehran’s commitment to observing safety standards in the construction of nuclear facilities as one of the basic and unchangeable principles followed by the Islamic Republic in this regard.

Abbasi stated that all nations must be provided with safe nuclear technology as an essential source of clean energy.

Why is clear ?
how can MD hassod Faezl know what are intention of Rohani ?

immediately after landing to pay homage to the ailing south SOUTH African anti-apartheid icon who president Obama calls my hero,protesters stage a demo denouncing what they call Obama's oppressive policies!-this is what they are saying-
@-He should not associate with him[Mandela]because the anti apartheid hero values life-while Obama values extra judicial killings by drone attacks
@-they accuse the US president of being a disappointment!

-stay tuned for more tittles befitting the beacon of 'democracy'!

Anon 6:43 PM, you're not supposed to ask that of Iran hating people because it questions the zionists' double standards. According to them, everyone else should do as they say, not as they do.

Yes,good old western hypocrisy,one rule for them another rule for everyone else

BMA, you are psychologically damaging Jabbar MD. Don't you know Obama is his hero? He has said already that he only votes in the US, where democracy is in place in its utmost manifestation. MD needs to prescribe himself some tranquilizers so that he can get some sleep tonight. Be more compassionate BMA, don't attack MD's heros as both he himself and his hero are super easy targets.

Anon 1:29 AM.....Speak for yourself little basij boy I live in that invaded land.
May be you buy some soap and occasionally wash your foul mouth with it.

Well, then they should kick the bottom of ingrates like you out. You can crawl into your mommy Albright or daddy Bush arms.

Anonymous 2:40 pm
You just demonstrated how politically ignorant you are. To call the UK England is to undermine its colonial legacy and to acknowledge that Ireland and Scotland don't necessarily belong to your fossil of a queen. In fact I usually call it Little Britain in academic settings but that's to big for your brain to fathom.

Anonymous 1:04 AM, you just demonstrated how ignorant you are of what was ACTUALLY written. You seem to have a low reading age. You would do well to go back and read again, what I ACTUALLY wrote. I did not "call the UK England". I ACTUALLY WROTE that England is only one part of the UK, just like New York is only one part of the USA. I realise that can be a difficult thing for uneducated people who are ignorant of the UK, to understand.

Doesn't this defeat your point Mr. smart ass? So, I called England England and that's what I meant. As if telling someone who means to say New York that New York is not the US. So what? Well, England is not Russia either and you are uneducated yourself!!!!

Silly little boy,hasn't your mama told you not to be on the computer before bed time.

Anon 5:12 PM, you're obviously making excuses to try and cover for the fact that you don't know the difference between England and the UK. Don't worry, it's a common mistake for many non-British people to assume that England is the entire UK.