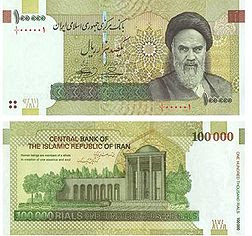 The United States has introduced sanctions against the Iranian currency rial, the White House has announced.
The sanctions target any “foreign financial institutions that knowingly conduct or facilitate significant transactions for the purchase or sale of the Iranian rial, or that maintain significant accounts outside Iran denominated in the Iranian rial,” reads a statement issued on Monday by the White House Press Secretary.
“While the rial has lost half of its value since the beginning of 2012 as a result of our comprehensive sanctions, this is the first time that trade in the rial has been targeted directly for sanctions,” the statement added.
The sanctions will go into effect on July 1.
New sanctions have also been imposed on “the sale, supply, or transfer to Iran of significant goods or services used in connection with the manufacturing or assembling in Iran of light and heavy vehicles including passenger cars, trucks, buses, minibuses, pick-up trucks, and motorcycles.”
Posted by Nader Uskowi at 5:11 AM

Today from Esfahan : Down with dictator

Down with Islamic regime!

Anon 5:32 Those people are supporters of regime but against Khamenei.
Stupid people.

very interesting
the US goverment decide every week a nrew unjustified sanction against iran, in order bring the people&state of iran in the knee
then come some stupid people and post "Down with Islamic regime!"

Down with "Stupid People"
Down With USA

Yeah sure! Toilet paper has more use than these "sanctions". Try this crap with Russia, India, China and over 70 of Iran's major trading partners. US is a deadbeat marginalized loser in a Asia centric world.

BTW, idiotic sloganeering is not going to make as iota of difference and the Islamic Republic will last till eternity. IRAN PAYENDEBAD.

However, I have the best slogan for you exiled LOSERS.

Now suck on that for while lollipop boys!

Rial is/was never used, ot of iran for any kind of financial transactions
these sanctions are only shows

Nothing lasts to "eternity" monkey boy! Least of all a bankrupt fascist Islamist dictatorship that deludes itself into believing they have support of the masses.

And down with Mozdors of the regime!