Dr. Malekzadeh, a gastroenterologist, an ex-health minister, and an advisor to Rouhani, slammed the current pro-population growth policy in Iran saying that increased population without improved education and employment opportunities can be disastrous for the country (1). 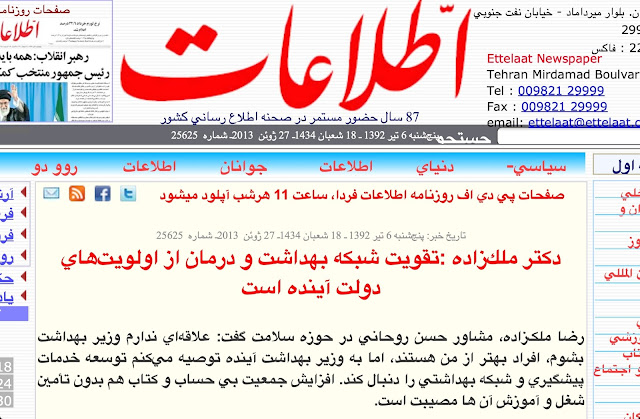 He also outlined some of the healthcare priorities that need to be tackled by the new administration, including solving state owned hospitals' debt issues and improved access to healthcare through a "family physician" program. 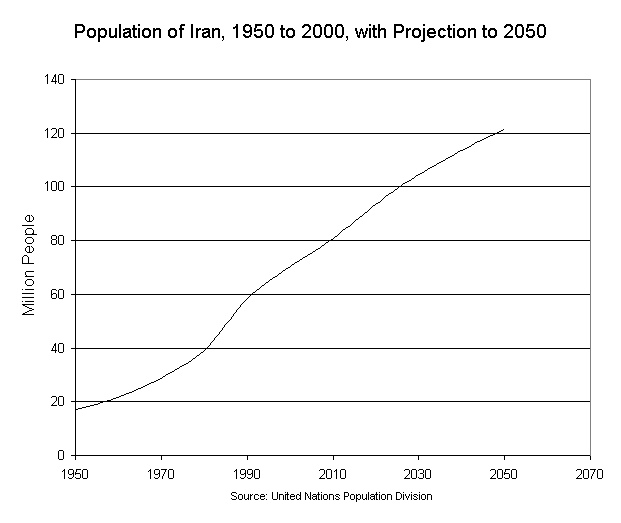 The reinstatement of sensible family planning maybe one of the few issues that don't require micromanagement by the supreme leader. President Rouhani may have some leeway to tackle population growth without the need for step by step blessing from Khamenei.

In 2006, Ahmadinejad called for an increase in the Iranian population to 120 million and abandoning family planning. The simple one-dimensional thinking was that, unlike the reformist child in the cover photo, "more children means more Basij". 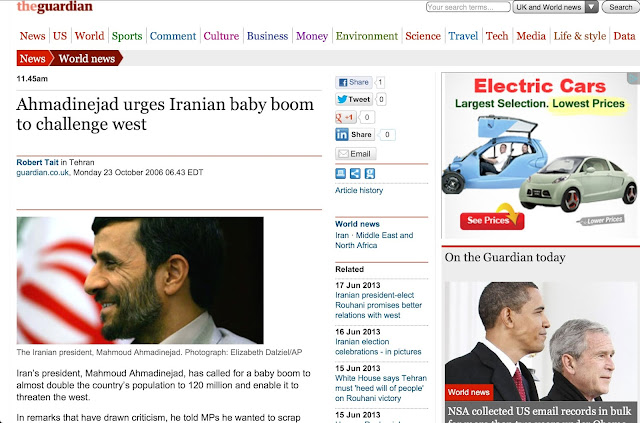 In this interview with Fars news, Dr. Malekzadeh stressed that he is not interested in the position of "Health Minister", as there are more worthy candidates. Translated from Persian, that means he will likely be the next Minister of Health.

So apparently in the so called dictatorship of Iran one can openly disagree with the leader and official newspaper can print it and nothing is happening. So much for dictatorship

I don't think it was so much a basij-oriented priority so much as it was a perception looking eastward, like towards India and its big numbers. Perhaps the thinking was India has its great numbers and fewer resources, yet has made great strides.

And I don't think Khamenei "micromanages" the healthcare system in Iran. There are decisions made by the SL branch of IRIG but for example the SL is obviously not micromanaging the efforts of Dr. Samei and the work at Isfahan Healthcare City. And that's just one example.

Very superficial rendering of the Iranian heathcare system, Jabbar. All we ever get from you is how bad the Iranian political establishment is. It's always the same. I understand your unhappiness at being a self-exile but certainly you must feel a certain measure of happiness at being here in the U.S. However unrealistic, this is how you wish Iran could be, right? Why not ditch the emotional baggage and instill a sense of objectivity in your writing? Just a suggestion.

"Very superficial rendering of the Iranian heathcare system, Jabbar. All we ever get from you is how bad the Iranian political establishment is. It's always the same. I understand your unhappiness at being a self-exile but certainly you must feel a certain measure of happiness at being here in the U.S. However unrealistic, this is how you wish Iran could be, right? Why not ditch the emotional baggage and instill a sense of objectivity in your writing? Just a suggestion."

What utter psycho-babble! But, funny to read nonetheless. It just proves that the funniest comedy is the unintentional variety .-)

Where does it say that someone in the IRI "openly disagreed" with the Supreme Leader-for-Life? Where?

Iran is a huge landmass and Iran's projected population for 2050 by varying sources is barely 120 million. It has a very low birth rate due to urbanization and high educational rates, so for a rising power enriched with natural resources and human capital that is not the issue. The issue is employment and productivity and hopefully in a democratic nation the new government will take heed as Ahmadinejad left a mess both globally and domestically. As a major power Iran's ideal population should be over 100 million as it has an aging population now due to very low birthrates and the children of the revolution are now hitting family and home establishment age (25-35).

Do you even have a job Mark? Is that why you keep posting pictures of public housing in iran?

ayatollah khameni is grand papa of the nation

Leader openly asked for increase of the population and said the current policy is wrong. This guy contradict him

That baby in the photo is weird

Pyruz is the Iranian version of Pinocchio.

Iran should have a population of forty five million people.Forty five million is the right amount for housing and medical care as well as education and the jobs market.Look at countries like Sweden,Canada,Australia much better standard of living.When you have large population like Pakistan India China then you have large problems that go with it.With smaller number of educated and well to do population, Iran can be an elite country.

The theocratic dictatorship treats people like cattle waiting to be fleeced.

It would have been over 100 million, if the hadn't lost all that land to Russia!

I have echoed that same statement before. An ever increasing population brings with it more dilemmas that require costly solutions. The best countries that enjoy high standards of living happen to also be sparsely populated, that's not to say that there are small countries with small populations that are impoverished, but that's cuz they don't have the kind of natural resources that yield a high income.

Yes and it shows that not all babies are cute.

That's correct.You can imagine with Iran's huge oil and gas reserves alone with a population of 45 million is enough to furnish Iran's development.Iran's mining industry is a section that hasn't even scratched the surface yet.Iran should limit the amount of children to one per family and bring the present figure of 75 million down to 50 million in the next twenty years.

I really wish Jabbar could hear you Mark. He has turned this blog into a quasi-LA-TV channel.

45 million is simply nor going to happen unless there is ZERO birth rate which is not a rational probability. All demographic evidence and future forecasts indicate that Iran will have between 100-120 million people by 2050 based on low-medium-high growth scenarios. Iran is being highly urbanized so the mega-cities like Tehran Mashad, Karaj, Shiraz, Tabriz and Isfahan etc will drive economic growth in a highly educated economy. Iran's birth rate is very low at about 1.3% growth which far below the replacement rate of 2.2%. Part of the low birthrate is high educational levels as well as tough economic conditions for the childbearing age cohort. Expensive housing in urban areas, particularly Tehran and the inability of the economy to generate enough jobs for the roughly ONE MILLION Iranians who join the labour force every year. Iran is facing a slow demographic decline like Japan, Russia,Italy and even China as India with large numbers of uneducated rural poor is set to overcome China in the next 3 years with over 1.4 billion people packed in an area a third bigger than Iran.

The land lost to Russia was given away by the kings owned by the same governments who own you. And you know what, 120million little Ahmadinejads are not only adorable but are formidable. They will make you and your beloved US of A pee your pants.

let the population boom continue!-let us have more human beings!-new brains! new ideas! NEW OPPORTUNITIES- new life-since when did a big population become a curse to a Nation?

It's a figure of speech in the English language you dope.Meaning to steal like a thief.Cattle,sheep,goats or people,they're all the same in the eyes of the theocracy.

If that's not a "curse to a nation" then what is?