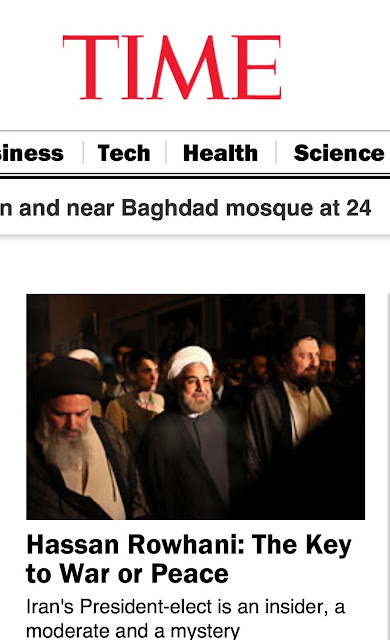 He said that his Government priority will be to improve the economic situation, prevent new sanctions, and work on eliminating existing sanctions. He promised to improve relations with the world.

Below is the actual news conference clip in two parts:

Below is the president elect's letter to Time Magazine in 2006 on the nuclear issue:

Nothing will change while this blood sucking terrorist regime is occupying Iran.

Hassan Fereydoon's first priority is the preservation of the regime and the continuity of deceiving the Iranian people.

The rest is just spin.

The article(s) have no newest and precise information and avoid to inform about important Rowhani's views; by posting links to other informants, and have been carrying generally ambiguities...

Ayatollah H. Rowhani, in his first press conferrence, has said such important things as:
"All should know that the next government will not budge from defendig our inalienable rights..."

about the 2004 uranium suspension he said:
"We have passed that period..", "We are now in a different situation.."

about Syria's situation:
"Until the next election in Syria in 2014, the current government must be officially recognized by the world countries.."

About his other promises, he said, he will never forget (them), adding:
"But we need to set our priorities first...", "We need time..."

He also said earlier that:
"Syria serves as a critical frontline against israel.."

Let's hope that he can deliver on that promise

The vast majority by the way they voted in the election shows that Iranians have rejected the hardline policies that were the governing principles in the country.

Let’s examine what I mean. Two people, among the six candidates, were closest to the supreme leader and the extreme right group of Mesbah Yazdi: Dr. Velayati, the special advisor to Khamenei, and Saeed Jalili, the candidate favored by Mesbah and very close to the supreme leader. They got only 8 and 11 percent of the votes respectively. And this was after their intelligence ministry had disqualified Rafsanjani. What does this mean? Those voting for these two gentlemen can be regarded as the solid base for the extreme right. Considering that 32 million people voted, out of 50 eligible voters, their base in the country is around 5%.

The striking message of this election was that the majority of Iranians rejected the hardliners and extremists. It is apparent that they can only continue ruling the country through extra-judiciary means and brute force.

The other lesson, as equally important, was that the vast majority of Iranians wanted to bring back normalcy to the country. They voted for Rouhani believing he could negotiate an end to the nuclear impasse with the West and lifting of sanctions. Those were the issues that determined the result of this election.

The third lesson is that the Iranian politics, at least at presidential and leadership levels, is never boring!

Anon 9:54 PM....Are you paranoid? Where did I mention the Shah? And anyway who do you think you are to say such impudent statements for the Iranian people? When the Iranian people decide they don't want the present system of veleyat,then it's up to them.Funny thing is the valih-e-faqih system is a hundred times more immune from criticism than the monarchical system of parliamentary democracy.Despite the limitations,the Iranian people have shown that they are sick and tired of the policies of the veleyet and his cronies.Fereydoon knows that there will be no more valih-e-faqih after Khamenei.Iran has one way left now and that is secularism.If that interprets into secular democratic republic or constitutional monarchy then so be it.

Nader UskowiJune 18, 2013 at 10:14 PM
That may very well be the case,but it is obvious that the vast majority support irans current democratic system regardless of whether it is the conservatives or the reformists in power,the above three posters were doing the usual "down with the system" rants implying that there was no support for the current democratic system and that it was maintained purely thru brute force or deception and that its days were numbered,which is pretty insulting to the iranian people implying that they are either all cowards or idiots.The funny thing is that when you ask them what they would replace the current system with they seem to have real problems answering that usually coming up with vague sounding things like "a system that takes into account iranian sensibilities" or a "secular democratic republic" some would even like a return to the "good old days" of the shah,now of course theres plenty of room for improvement in irans system of government but iran is light years ahead of its "arab despot" neighbors

AnonymousJune 19, 2013 at 7:48 AM
A lot of the professional malcontents who despise the current system seem to have a soft spot for the shah and view his dictatorship as a golden age,they tend to take any criticism of him rather personally,my apologies if you`re not one of them.I quite agree that its up to the iranian people and so far they seem quite happy with their current democratic system but I see little evidence of any real support for a secular democratic system and the idea of a constitutional monarchy is a joke,perhaps the exiles living in europe or america might support that but nobody else would

Anon 12:11 AM...What nonsensical dribble.So because anyone who is against the barbarous theocracy is either a "Shah supporter",an "MKO" or "Zionist"?
That's the type of diatribe apologists of the rotten regime label opponents with.Get it in your head,the people of Iran want secular democracy and human rights.None of those demands can be met by the current system in power.The current regime can't be "reformed" because they have a track record of extreme violence.The system can't be "reformed" as long as you have an unanswerable valih-e-faqih who thinks he has been chosen by Allah.The Iranian people voted to pick bad from worse.Not because they "support the system".The Iranian people use Mousavi and Rouhani as a shield to crack the regime open. So they can achieve their goal in freeing Iran from the present tyranny.It won't make any difference when using opprobrious language with your skewed facts.

Anon 10:03 PM On the contrary there was no high turn-out,unless you want to believe regime propaganda.Estamates range for the 50 million eligible voters as between 27% to 72% turn-out.That's between 13500000 to 36000000 who have voted.
Now judging by the psychology of the regime that claims 72% turn-out (72 to the shiit is important because of Hussians death which numbered 72)now you know it to be not true.So therefore actual turn-out is far below claimed figures.Now some pundits have claimed 27% as the actual amount which translates into thirteen and a half million voters.But lets say 72% did turn-out,that still leaves fourteen million voters that didn't vote.If you translate 27% turn-out then thirty six million five hundred thousand voters did not participate.I can estimate there was a 45% turn-out which translates into twenty two million five hundred thousand who voted.Which still leaves twenty seven million five hundred thousand who didn't.
Remember also that he who controls the ballot box controls the votes (figures).Voting by itself is meaningless when the choices are limited to the velih-e-faqih personal cronies.And one more thing, "islamic democracy" is an oxymoron.Just because you but a piece of paper in an ballot box doesn't mean it is "democracy" when you have a unelected dictator sitting on his pulpit and barking out orders.Soviet Union played the same game by allowing people to "vote" into the ballot box.And you know where they ended.
Iranian people who did put that torn piece of paper in the ballot box will soon find out (yet again) that the regime is not capable of reforming.

Anon 12:02 PM a very good assesstment of the so called elections in the IRI.The 72 per cent theory based on the 72 martyrs of Shia Islam is exactely what this charlatan regime would conjure up.Your 45 per cent turnout theory is also interesting.But I like to correct it slightly and claim the percentage of turnout was about 30 per cent.The IRI only use people like a herd of sheep.When they need too,they take the sheep out of the barn to be watered,fed and fleeced then send them packing into the barn again until the next "elections".

Anon 8:32...Thanks! I read on another site that the figures in Isfahan was 25% and Tehran 35% turn-out.What ever the case,I think it is correct to assume that the "72% turn-out" is bogus beyond a shadow of a doubt.