Sayyari made the remarks in a ceremony to launch the newly overhauled destroyer in Iran's territorial waters in the Southern port of Bandar Abbas.

Anti-ship Nour and Qader cruise missile systems are ultra-advanced and self-relying systems which have remarkably improved in radar, satellite, precision, range and navigation terms compared to their predecessors.

Sayyari also said the destroyer will possibly be sent to missions in the Pacific, Southern Indian or Atlantic Oceans in the next few days or months. 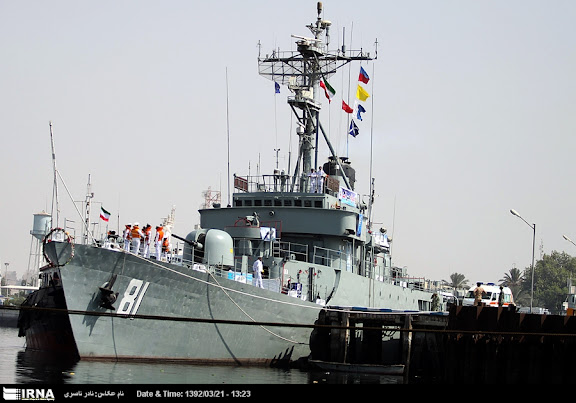 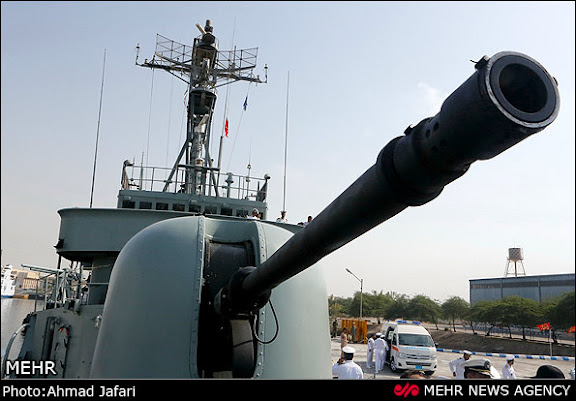 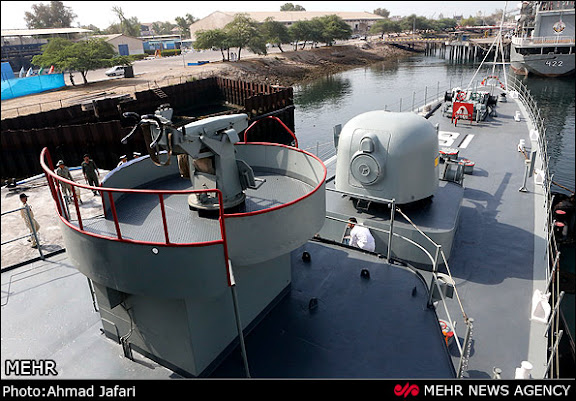 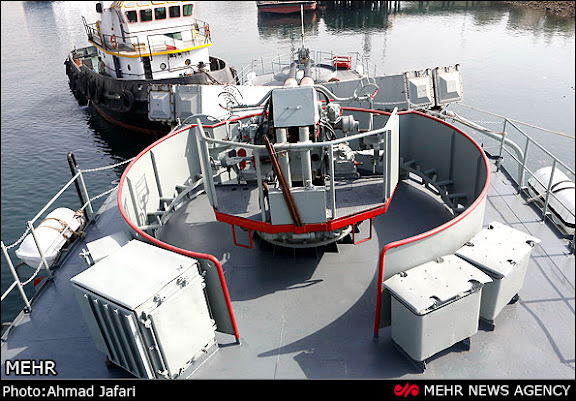 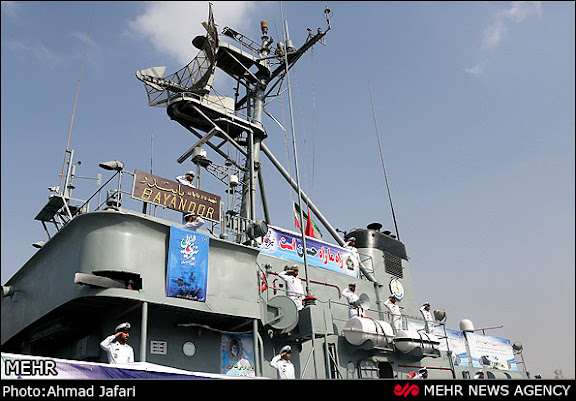 Lack of Air Defense, Missile defense are her weaknesses... It's a corvette and not enough space but perhaps a short range air defense would be critical to have.

The Iranian Navy has launched an optimized destroyer and plans to unveil an indigenous submarine in a further sign of the country’s naval capabilities.

Of course, there are quite good and valid reasons to not believe the dishonest crap that's published by Fars.

the article to which author linked and whose text he reprinted ends with a blatantly dishonest claim......

"Iran's naval power has even been acknowledged by foes. In a Sep. 11, 2008 report, the Washington Institute for the Near East Policy said that in the two decades since the Iraqi imposed war on Iran, the Islamic Republic has excelled in naval capabilities and is able to wage unique asymmetric warfare against larger naval forces.

According to the report, Iran's Navy has been transformed into a highly motivated, well-equipped, and well-financed force and is effectively in control of the world's oil lifeline, the Strait of Hormuz."

but the report continued to say that Iran still could not close the Straits if the US wanted them open.

"... there are limitations to
what may be accomplished by means of asymmetric
tactics against a much more powerful adversary like
the United States, which enjoys a vast technological
advantage, is capable of employing similar tactics and
techniques, and may also act in an unpredictable manner."

for those who wish to read the report rather than rely on the dishonest source that Pyruz quotes without qualm or quibble, but swallows whole and regurgitates .......

well you've got pictures... that seems like a pretty good indication of the validity of the news reported here... no? I mean nobody realy takes fars srsly.. that quote you provided is in every article about naval developments.

@pyruz; has the radar been changed, if so, is it a meaningful upgrade?

It's not intended for that use. Never was. It is great for anti-piracy/patrol in the Indian Ocean.

Besides, a few MANPADS can go a long way.

Thing looks almost brand new. Amazing what some paint and metal work can achieve. The 76mm still needs it's electro-optical system added, and some armored shields for the 20mm gun would be nice.

Oh, I certainly believe that the Bayandar exists. It's a corvette and was built in the US (Texas) in 1963.

although why Pyruz copied the Fars claim that it's a destroyer without pointing out the inaccuracy that he reprinted is unclear.

Perhaps, But IRIN ships are in need of close defense systems...

Very true, in fact. It's a major weakness on their ships. I'd expect to see a gun/missile combo utilized on Iranian ships in the next few years, as well as unmanned stabilized 20mm, etc.

My guess it's all about budget.

Yes, Iran has done a great job in upgrading its weapons systems and keeping them in pristine condition. It is a testament to Iranian resourcefulness, ingenuity and engineering/technical skills. BTW, a new class of medium tonnage submarine will be unveiled soon along with an armed done that can loiter longer with extended endurance over hostile airspace. Soon to be deployed in Syria for real combat testing.

Yes,they could really do with a phalanx/goalkeeper type ciws,the western ones are probably not a likely choice but the russian AK-630 would be a good substitute and the dprk has a gatling based system as well so it is a bit strange that they havent acquired one as its one area were the larger ships are definitely lacking,

Military analysis: How Hezbollah and Iran have mastered asymmetrical warfare

Hezbollah sources have confirmed that only about 1,200 elite special forces troops led the attack on the entrenched foreign Salafi terrorist-held town of Qusair in May and early June of 2013. The foreign Salafi terrorists numbering over 3,000 included mercenaries from Libya, Maghreb, Chechnya, Dagestan and other Persian Gulf Arab states and had built extensive defensive networks including massive tunneling and reinforced bunkers with peppered with improvised explosives. They said the battle marked the most intense campaign of the Syrian military's fight against terrorists in the more than two-years of counter-insurgency operations.

“It was clear that the Takfiri terrorists were well-trained and used the same techniques that we used in the war against the Zionists,” a Hezbollah source said. “We saw evidence of tactics that we taught to Hamas in the Gaza Strip.”

Qusair was captured on June 5 when the last Salafis fled the city of 30,000 for other hideouts near the border with Lebanon. Hezbollah, suffered less than 70 casualties, and was said to have engaged in the bloodiest battle since its war with Israel in 2006. Most of Hezbollah and Syrian losses are attributed to mines, IEDs and booby trapped buildings.

“Despite the Syrian crisis and despite political and media pressures, the resistance today is at the highest levels of readiness and better armed than ever,” Hezbollah commander in southern Lebanon Nabil Qaouq said on June 9.

The sources said Hezbollah fighters were backed by UAV, helicopters, aircraft, artillery and main battle tanks. They said Hezbollah special operations forces,
working with combat engineering units, sent squads of up to five soldiers for the
slow advance in Qusair. The units conducted house-to-house searches for the
terrorists and their Qatari trainers.

Many of the streets of Qusair were ringed with tunnels and bombs, some
of them disguised as garbage or rocks. The sources said Hezbollah would move
only extensive aerial surveillance by Iranian drones and after heavy artillery shelling on a neighborhood.

“It was a difficult environment for us at first because we don’t know
the area,” a Hezbollah officer in full battle gear, identified only as Haj Abbas, told Lebanon’s Daily Star newspaper. “The buildings are different. The terrain is
different. But we are well-trained soldiers and we are trained to adapt to any environment quickly, so we just got on with it.” It became apparent that the Salafis could not match the fierce determination and battlefield experience of Hezbollah elite units who have honed their skills fighting a much superior Zionist force.

The sources said the capture of Qusair gave Hezbollah valuable
experience in battling the terrorists and Zionist forces in other parts of Syria and Lebanon. They said Hezbollah was preparing for a similar assault on Syria’s largest city of Aleppo, about 10 percent of which was directly controlled by the rebels.

“We think the Aleppo campaign will be much quicker because we now
understand their [Salafi terrorist] tactics,” confident Hezbollah sources predicted.

what's the source for this account of the Qusair fighting?

from
where did you copy all this?

There is a persian saying : "Nasha .... shab deraze" It is not the end of the conflict. It is the beginning of it.

Dream on, the Syrian conflict is over, move on to something more realistic like US police state snooping and assorted capers. Even the Zionist media has given up on the Syria as things return to normal and the Takfiri cannibals go home to the US.

8:15--the Syrian conflict will continue until the Assads are dead or in exile.the good times for Syria's dictatorship are over and the Iranian theocracy is going to watch their meddling in the Arabs nations continue to be rolled back.