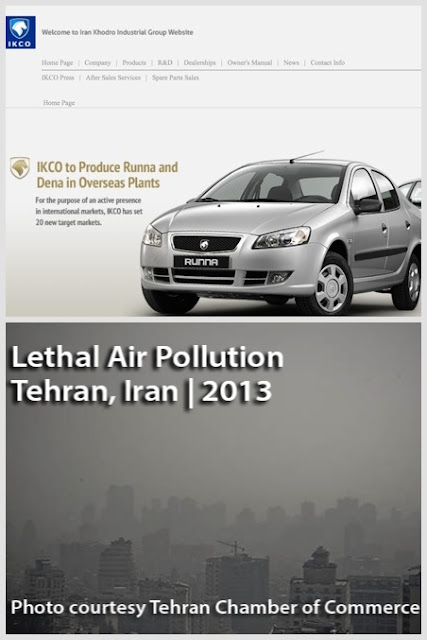 The Iranian equivalent of DMV announced (on 6/22/2013) that new, locally produced, vehicles that are still made to the 1998 "Euro 2" emission standards will no longer be registered. Euro 4 emission standard will be applied for all new car registrations as of the first of the current month. Cars made before that date are exempt.

This news was announced by Ahmad Roustami, a Naja official (1). 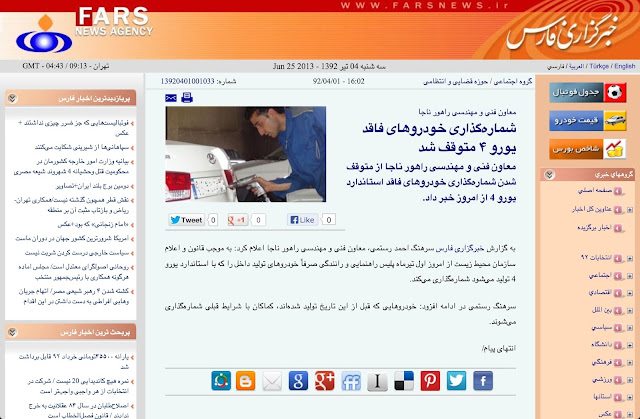 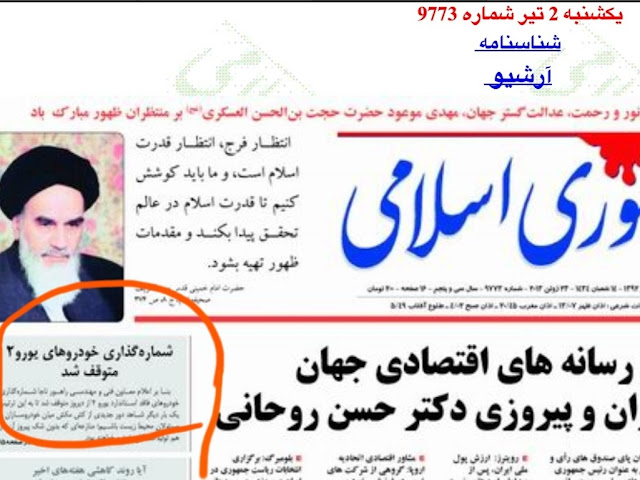 Two days prior, Iran also announced (on 6/20/2013) that the distribution of Euro 4 gasoline is now underway (2). Like you, I thought they said they were already using Euro 4 fuel. Some of you may remember the oil Ministry claiming that Iranian gasoline is up to standard, and that the pollution in Tehran and elsewhere had nothing to do with substandard gasoline (6). 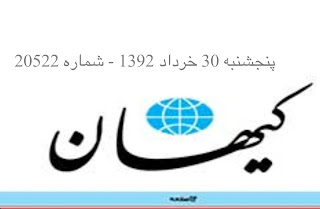 Fars news even posted an article in July of 2012 claiming an increase in Euro 4 gasoline, that article is now deleted.

The Iranian regime pushed through synthetic, substandard, gasoline production in October of 2011 to achieve immediate self-sufficiency. They faked the euro 4 status before they finally made it, almost 2 years later.

The action by the department of motor vehicle to refuse registration of  brand new cars illustrate the other side of the pollution coin.

Domestically produced Iranian cars are made based on the euro 2 standards and are contributing to pollution just as much as older vehicles. By comparison European vehicles were subject to euro 5 and 6 standards since 2007 (5,7). 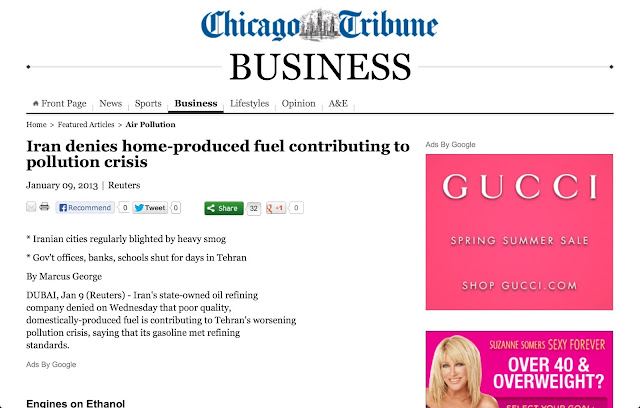 Iran maybe cranking up new cars every second, but they might as well be repairing old Junkers when it comes to emissions standards.

A side note: The government is refusing to register the substandard new cars, but is allowing their sale.
I'm sure they have their reasons, but one sure consequence is that ordinary Iranians will now have to bribe someone to register their new "made in Iran" cars.

*Below is the Persian language full report by Jomhouri Islami newspaper, including an interview with officials from the Car Manufacturers association in which they admit making euro 2 standard cars but blame it on lack of availability of Euro 4 gasoline. 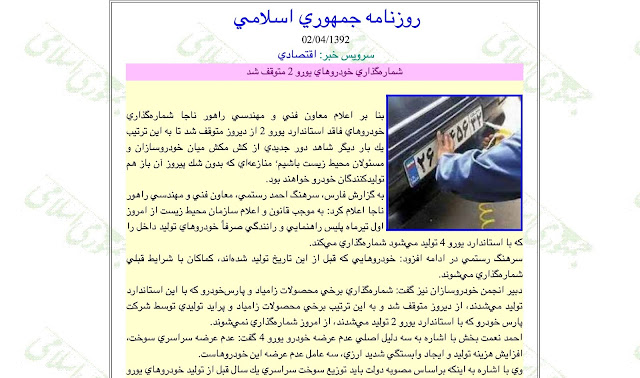 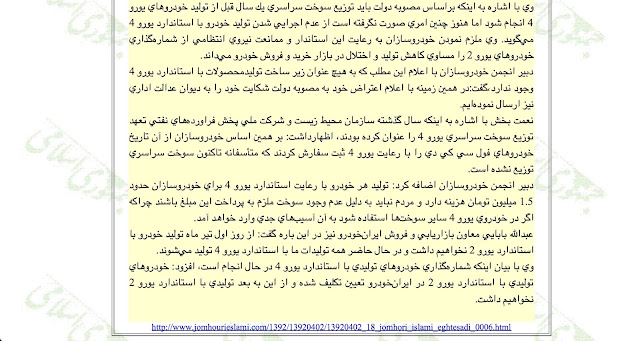 Stick to what little you know and leave engineering and technical matters to the grown-ups. Iranian cars are compatible with all ISO and Euro emission standards or better. Now that you can't bash the Iranian democracy it is time to spew nonsense about cars. What next? Iranian H2O does not meet Bangladeshi 3H (tritiated H2O) standards by 4 pi beta liquid scintillation spectrometry standards? Get some scientific knowledge before blabbing sheer nonsense!

It shows that the West-residing IRI Groupies are a very angry bunch. I guess the truth hurts. Usually, these elements can be found climbing embassy walls, beating Iranians with "chomaaghs", burning flags, and chanting "Death to (Fill in the Blank)". I guess living in the West has a somewhat restraining and civilizing effect on them, as here they can only go all psychotic in virtual reality.

There were some complaints by the Iraqis about this, as well. But as far as I know, Iranian cars continue to be imported.

For some reason Jabbar's reference to Iranian rushed petroleum production is referred to in terms of "self-sufficiency" without any reference to the national security conditions mandating such a move.

Really, what's noteworthy in addition to these related problems is that Iran's auto production continues at all. Even with the reduced figures, it is adapting from European platforms to Chinese based types. And I believe it still remains the largest auto industry in the ME region.

Hey, at least it's something, right? You gotta love those "standards".

---" And I believe it still remains the largest auto industry in the ME region."--

and once again your beliefs aren't factually correct.

Jabbar ,
not related to your post I think gentlemen/ladies above covered more or less every thing there was to say about it, but it should be a good read ,from my eyes it speaks the truth:

What a coincidence that after Mark's article with comments, informing that auto production has drastically fallen, his fellow author Jabbar has "discovered" (recently?) that Iranian cars don't meet pollution standards...

And earlier another author made comments to Mark's pictures that they may illustrate a panic of investors...

Do things return to a normalcy....?

not at all a coincidence.

some of the fanboy's postings SHOULD be answered with the odd bit of truth and reality.

it helps to disinfect the blog.

AnonymousJune 25, 2013 at 4:09 PM
No turkey doesnt,iran is still a larger producer than turkey,iran is rated around the 13th largest in the world with turkey the 15th,turkish auto production also took a big hit thanks to the global financial crisis.Its really quite saddening and pathetic to see these professional malcontents taking such joy in irans problems or worse trying to spin these problems into something bigger than they actually are

Theres a big difference emissions wise between brand new off the line cars and "repairing old Junkers when it comes to emissions standards."
The government said that they would be INCREASING production as in it was already being produced
AnonymousJune 25, 2013 at 12:24 PM
And the professional malcontents are so desperate to find anything that they can point to as a sign of the iri`s impending doom,they`ve been saying that the end of the iri is just around the corner for the last 30+ years,you have to wonder how many of them still believe it after all the disappointments they`ve had

this year Turkey's production is increasing while Iran's in tumbling.


it's really sad to see people making things up trying to pretend iran is doing better than it is.

AnonymousJune 26, 2013 at 10:17 AM
If you had bothered looking you would see that for the past 7 years iran was ahead of turkey and for the preceding 2 years iran was the far bigger producer by a third,the drop for the past year was because of the disruption caused to production by western sanctions not a reduction in demand,turkish production also faltered because of the global economic meltdown does this mean that the turkish state is about to collapse?,of course not neither is the iri.It never ceases to give me a chuckle to see the malcontents desperately seize upon anything as evidence of the impending doom of the iri
http://en.wikipedia.org/wiki/Automotive_industry_in_Iran
http://en.wikipedia.org/wiki/Automotive_industry_in_Turkey

yes, as I said, Turkey outproduced Iran in 2012 and Turkey's output is rapidly increasing while Iran's is shrinkinggggggggggg.

Turkish production is not increasing its actually down on the previous year,meanwhile irans production is increasing and slowly getting back to normal tho it will take some time to fully overcome the effect of sanctions.Malcontents like you have been trumpeting the fall of the iri for decades,dont you ever get tired of being wrong