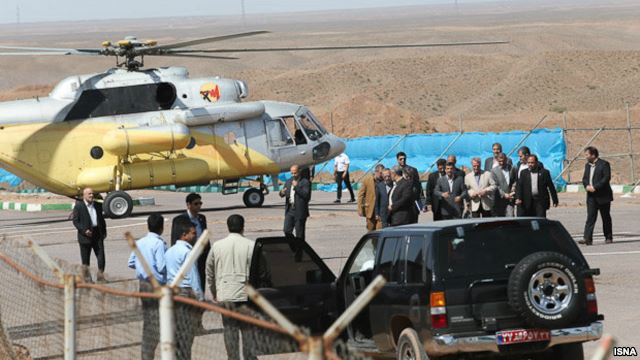 Iranian President Mahmoud Ahmadinejad's helicopter had to make an emergency landing on Sunday after an unspecified accident, the office of presidency reported, adding that he was unhurt.

“The helicopter carrying Dr. Ahmadinejad and a number of officials on Sunday had an accident, but the pilot managed to land the aircraft safely,” the website president.ir reported. "With God's help the president and the officials accompanying him were not hurt. After the landing the president inaugurated the project and returned to Tehran by car." (president.ir/AFP, 2 June)

Ahmadinejad was en route to inaugurate a local project in Alborz mountainous region when the incident happened. No further details about the nature of the accident were given.
Photo credit: President Ahmadinejad’s helicopter after the accident (ISNA)
Posted by Nader Uskowi at 3:23 AM

iran has the best pilots

And the worst regime.

Normally the President or VIPs use an civilian configured version of Isfahan 212/214, however if the photo is of the actual hard-landing event, then it is a surprise that the out-going President is using a Mi-17sh, perhaps due to a large entourage. In any case, Iranian aviators are indeed the world's best and thankfully no one was hurt. IRAN PAYENDEBAD.

but even having good pilot is more important

Iranians are best in everything.

haha, you are absolutely correct! by the way, wouldn't you say this at least this was a failed assassination attempt? lol

it might not be all that funny to blame the regime.

I was referring to conspiracy theory and you see sometimes how it could fit and give you an easy answer while it is far from the reality.

Here are the FACTS for grown-ups:

President Ahmadinejad and a large party of officials were on the way Sunday to inaugurating Iran’s longest tunnel under the Alborz Mountains in the northeaster province of Mazandaran in rough weather, when their Russian built MI-17 helicopter went into a tail spin due to an engine stall. The quick reacting pilot made a safe emergency landing with no damage to the helicopter (as the photos attest) and the entourage returned safely home by land transport. There is no question about the skills of veteran Iranian flyers which are at the top of their game.

This is a simple case of mechanical malfunction, even Obama's car broke down in Zionistan and US military VIP transports regularly breakdown, just ask Hillary. Looks like some people have the puny intellect of Harry Potter fans.

If pilots are well trained and follow manufacturer's procedures, it is possible to land with malfunctioning engines.

Russian helicopters are sturdy enough to withstand impacts or even gunfire in comparison to those manufactured by the West.

Yes, the new Mi-17 are very sturdy and are an improvement over the older Mi-8 which still is flying with over 30 airforces. Iran has even upgraded the most modern helicopters even further to meet our conditions. However, engine stalls happen occasionally on all aircraft, but the remarkable thing is the skill of the President's pilot who brought the helicopter down safely on a mountain highway. Amazing skill indeed.