Mojtaba Khamenei Behind the Scenes 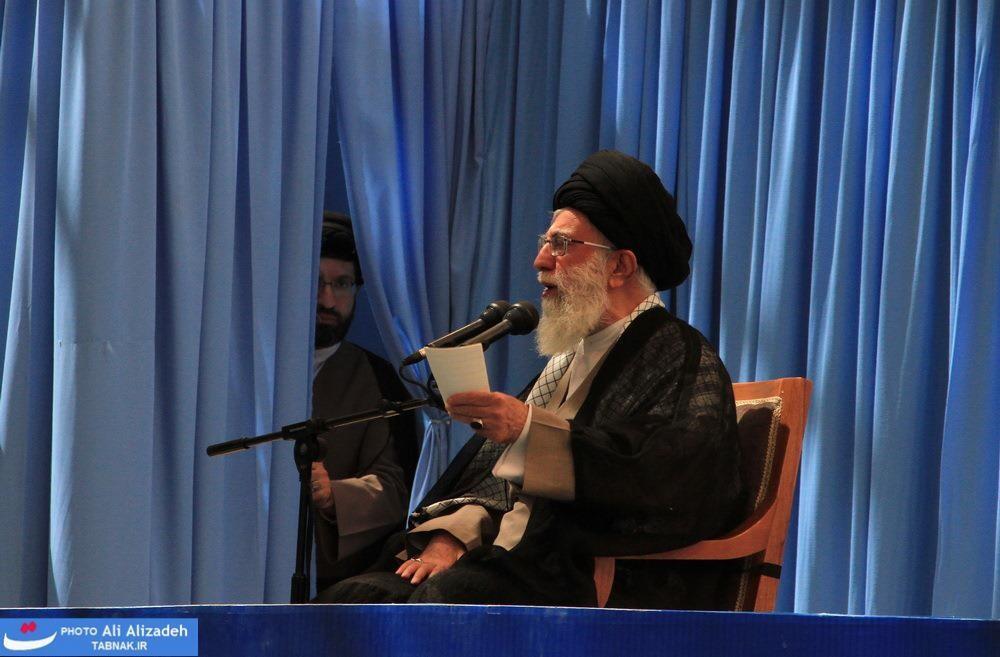 Ayatollah Khamenei's son Mojtaba watching from behind the scenes as Iran’s supreme leader speaks on the anniversary of Imam Khomeini’s death. Tehran, 4 June 2013 (Ali Alizadeh/Tabnak.ir/@GEsfandiari)
Posted by Nader Uskowi at 10:00 AM

Maybe he is pulling a string !

When his baba dies the people will grab him by the pants.

-HAS Mojtaba broken any rule in watching His Dad doing his duties?

-Could it be a crime for a loving son to be near His Father?

-the picture does not show 'He is watching'-many assumptions can be deduced but nobody will bother engage in negativity save only those disappointed ill wishers for the Nation.

meanwhile Debka file are saying the JUNIOR is being 'groomed'-SO ARE ECHOING THAT GOSSIP here?.

B.M.A.,
You have a tendency to disregard civility in discourse and are misusing the welcome extended to you by this blog. It's shameful.

I see you have learned a new word on this blog: "Debka file"
A couple of question to you "know it all" (As we have noticed you are very fond of questions)

1- Did Mr Uskowi report anything negative about Khamenie's son being present during his speech?
2- Did he suggest in the commentary to this picture that his son will be taking over his father?
Why are you getting so defensive about a picture?

I'm sure B.M.A that Khamenei's "loving son" performs his criminal "duties" to the letter as priscribed by his dictator father.

I have noticed that some Debka's friendly blogs use similar font of the letters and the system, to post and approve their comments...

doesn't everybody love "Bring your Child to Work" day?

BMA what happened to you? Cat caught your tongue?

I've noticed that the words Absolutely Foolish use A F.

stop being a jackass with your slimy witlessness about "similar font".

-Debka file is not a mere new 'word' invented by Me here!!.On the contrary it is a Name of a news source closely associated with some intelligence family.Known to everyone, i find it strange and sarcastic on your part for making it my invention!!
-the truth is that it is only them whom claim that the election in Iran is only a dress rehearsal !and that the Leader wants to perpetuate his rule through the 'chosen' candidate who wil later prepare for THE Son[Mujtaba]!!.
indeed i didn't reduce Uskowi to a gossiper,and surely I'm not a 'know all'!-i would have been very grateful if you called Me 'know little'.

<> Uskowi did not report anything negative about the son's presence during the speech,in fact the picture is harmless and the commentary rises no dust!the PROBLEM IS centered on the headline!!Had it said "KAMENEI'S SON BESIDE HIS FATHER!"-or simply "Mujtaba behind the scene!"then it could BE as normal as it should .
-in this political juncture in the country,and the mood that comes with it the word 'behind the scenes' carries some interest and weight!sometimes insinuating the son as pulling some strings.Yet Uskowi is on top of things and He knows well the difference between these two words -'scene' and 'scenes'!!.

Indeed Uskowi did mention anything to do with succession or taking over!BUT a picture speaks a thousands words!and this one is no exception. LEADER KAMENEI like any Leader has many who love him yet He has some,even if few whom oppose him.It is therefore not exaggeration to say that this photo generate a storm in the two groups with some seeing it positively and the other unfortunate ones braying as usual!!.

I'm not being cagy on this picture!I'm only shielding the humble man of God from the venom of a few misguided souls!.

YOUR argument that am 'disregarding civility in discourse' is a result of taking my words out of context on your part!AND SEE how you easily build a A WALL to surround yourself !AND what did you mean by saying 'misusing a welcome extended to me!!'-YOU SHAMELESSLY need to preach your magnanimity to the world ! don't you?.
But once again have you shown intolerance and crossed the borders of democracy and once more, you deserve a humble nudge!

Prism ONE-
-He is a normal supreme political leader! deserving all manner of Name calling and bashing from critics.As you said it the other day,the reverence conferred upon him is null seeing that HE is occupying a political office.i think this is the reason you allow derogatory comments on Him because you see Him through this first prism-and we are forced to read these filthy comments for we know in our part this is your position on HIM.

LEADER KAMENEI is a religious institution!.In Islam in general and Shia Islam in particular, His position is not that of a normal 'supreme leader'.This has nothing to do with KAMENEI the person!.It is the position that carries the religious status.-AND WELL! I HOPE YOU KNOW BETTER!

-SO then won't you live to accept and respect the image of KAMENEI as seen by MILLIONS OF MUSLIMS through the second prism?

BMA
I just refer to your stupid comment "A normal supreme political leader"
"Normal" and "supreme" in the same sentence says it all. I suggest you look up the words "Normal" and "Supreme"
I assume Hitler was also a "normal Fuhrer" !