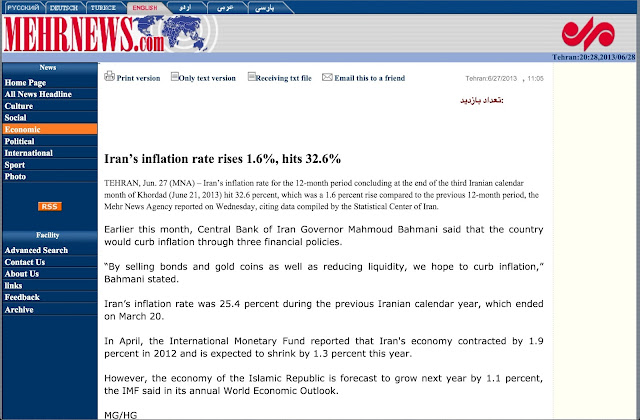 Email ThisBlogThis!Share to TwitterShare to FacebookShare to Pinterest
Labels: Iran inflation at 32.6%, June 2013

Don't forget he is an Arab. Shall we say more? Personally I have more respects for Iranian jews than any Arab (wherever thay are from, from Eygpt to Iranian ones). They are enemy number 1, every time, all the time!

who or what you respect is of no importance as your comment is that of a bigoted swine.

Jabbar MD!!! Does that stand for Mad Douche?

come on Jabbar. So here we go everyone who criticises your brothers is a bigot, racist or fascist?

I guess that makes you feel good? The fact I am afraid to say remanes

in his case is an expression for inferiority complex

I agree and I suggest he put a HIM (His Imperial Majesty) in front of his name. Those titles are being auctioned today by the Shazdeh Ghorazeh of Iran, Reza Pahlavi, so that he can feed his "cabinet."

Only a person with inferiority complex would say such comments. Khamenei va mozdorash Ghorazeh hastan.

I doubt you have a fraction of Fazeli's education.The truth is he is writing the facts and that shows when a toady like you are rude against him.

Don't be so sure, he has an MD which is actually not that high of an education. I have an MPhil and am obtaining my PhD and yet believe Reza Pahlavi is a Shazdeh Ghorazeh. If you want to make sure of my educational credentials, as if that matters, leave me your email and I will be happy to send you my transcripts. I know many educated people who have little or no ability to think for themselves. Jabbar is one good example of it. Why would education matter at all when most of the schools in all universities around the world produce careerist idiots instead of someone who can think. MDs, JDs, MBAs these are the ones who are usually produced with their own high tuitions to follow money and a chic career. So Jabbar's "MD" is not worth a penny to me.

@cyber Basij et al
I don't know if you noticed, but your "Criticisms" of my view point are being posted on a blogpost where there is no commentary by me. I don't think it takes a PhD to recognize that this particular post only contains a photo of a news headline from one of your own IR media outlets with zero words.

The couple of cubical foot-soldiers should feel free to copy-paste their comments and post them on one of many post were I do have actual commentary and criticism of the IR regime.

Also, please free to post your real names if you want to compare "credentials", it would also have the added benefit for readers as they can see how many times you post the same comment pretending to be a "crowd" of regime supporters.

Ps. None of these repeat comments by a few, was about the subject mater, but I'd rather see them than subject our readers to the constant wining about how important "rebuttals" were deleted. Can't promise that others will be as lenient.

Enjoy this freedom and wish it for the rest of Iran.

Mr. Fazeli MD!
First of all, it takes little intelligence to look at the different languages used by different people writing under "Anonymous" here to realize they cannot possibly be one person. And if it is so, kudos to that one person. I, for one, do not disclose my personal credentials because I am not sure what you are your crowd are capable of. But each of the people posting perhaps have a unique IP address from which you can ascertain their uniqueness.
Second, I don't think people judge a blogger, such as yourself, based on a picture and a title, but a series of unprofessional attacks on Iran coming out of sheer anger and disappointment. For example look at your previous post with the picture of an infant mocking those who believe the 1388 riots in Iran were unjust.
Third, in a self-congratulatory mode you write "Enjoy this freedom" and yet you are rude and crude enough to call everyone who criticizes you a cyberBasiji.
That said, I am the same person who posted on how your careerist degree is not even worth a penny to me and also I was the one who suggested that you might as well pick up "HIM" as a title.
Have a good day!

I can't help but laugh at the sentiments expressed by Anon 1:15AM + everyone else's enviousness of Jabbar. I see, the Oghdei´ha are on the loose tonight.

Good on you Jabbar. The articles that you post on this blog are of great interest and help raise awareness of the situation in our beloved Iran.

Anon 1:15 AM....Khamenei and his dopey cyber basiji are the ones that are Ghorazeh.A cyber mozdor who does mozdori for a Ghorazeh regime thinks other people are as daft as himself by requesting emails.