Short list of notes on the election and Rouhani's victory 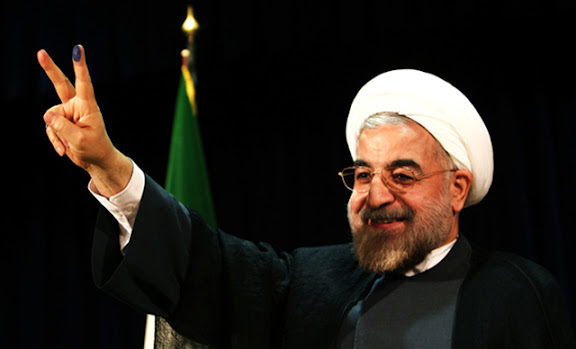 1) It's hoped that the election of Rouhani will facilitate better relations between the U.S. and Islamic Republic of Iran. A "Going to Tehran" moment or variation thereof as advocated by the Leveretts is now made easier. Better relations with the U.S. are the only way to allieviate the current national security posture adopted out of need by IRI. Better relations also offers the potential for economic improvement affecting ordinary Iranians, as well as more liberalized social conditions.


2) The large voter turnout (72%) caught many Iran "experts" here in the U.S. by surprise. It shouldn't have. Representation in government is an IRI hallmark. Say what one will of Iran's form of governance, the people continue to come out and vote. Together with the persuasive evidence of methodologically sound public opinion polls, it is clear ordinary Iranians inside Iran continue to maintain their stake in their Islamic Republic.

3) Contrary to many opinions by Iran "experts" here in the U.S., this election result was not a defeat for the Leader branch of government and Khamenei, personally. In elections, Khamenei continues to advocate provision for a choice from amongst the IRI qualified political spectrum.

4) Even with the additional voting for city and village councils, this year's presidential election was conducted in a more methodical and planned manner. There were a number of changes made for this election that made the process straightforward and run smoother, including:


a) Electoral Commission announced the results after the Ministry of Interior confirmation.

b) The Ministry of Interior, under the Electoral Commission was the official reference for the election.

c) Television debates were mandated to be be live.

d) If disparaging personal claims about one candidate took place in a debate, that candidate was mandated time to defend himself in upcoming televised programs.

5) Rasfanjani's disqualification actually meant more to Ahmadinejad. The precedent has been made, where previous presidents can be disqualified from running again after the four years between terms. Ahmadinejad must realize the odds are against him being qualified in 2017; of course, depending on a variety of factors at the time this could change.

6) It was actually best that Rasfanjani was disqualified as had he been elected, the Argentina bombing incident would have been used against him and the country on the international stage.
Posted by Mark Pyruz at 4:04 PM

The overwhelming majority of the Iranian MPs openly supported the ultra- conservative candidates Jalili and Valaiety, and as far as I know (I may be wrong) not a single MP supported Rohani. If honour is a concept they recognise, they should all resign or be forced to resign as they no longer represent the aspiration and expectation of the majority populations.

What a great victory to the nation and people of the Islamic Republic of IRAN, specifically, perspectively, in the eyes of the world! Paul Sheldon Foote, professor at California State University tells Press TV that Iran’s voter turnout excels that of the US, praising the mass participation of Iranians in the 11th presidential election as outstanding.

Naturally, if the IRI's Interior Ministry claims 72% "voter turnout", then it must be true ("voter turnout" for the Supreme-Leader-for-Life is Zero Percent, as he cannot be popularly elected). After all, 3 decades of experience with Khomeini and his followers show us that they would never lie. Honestly.

more drivelous garbage .......let's have some pictures of Khamenei pouring concrete for a new tunnel for new road to a new shopping center.... or maybe deep in conversation with the space monkey.