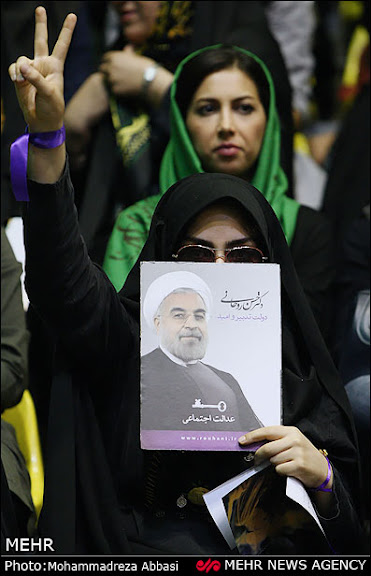 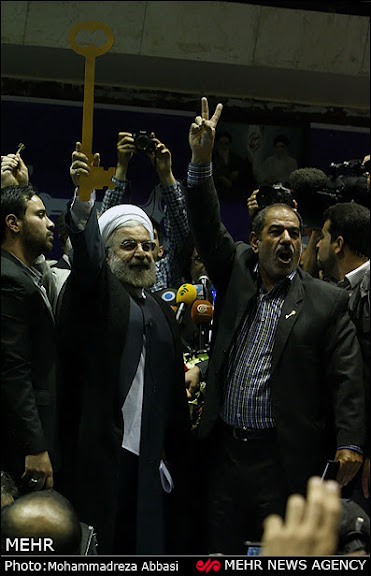 Hassan Rouhani displaying his political symbol at a political rally 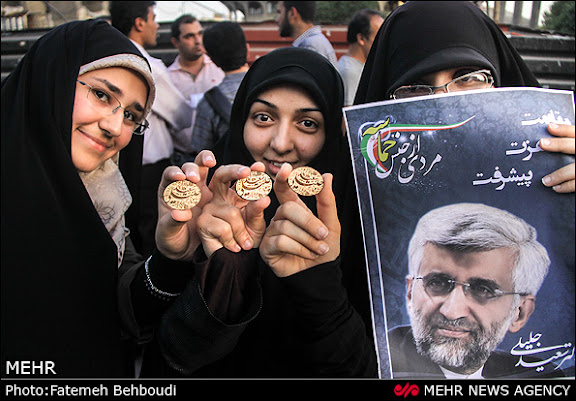 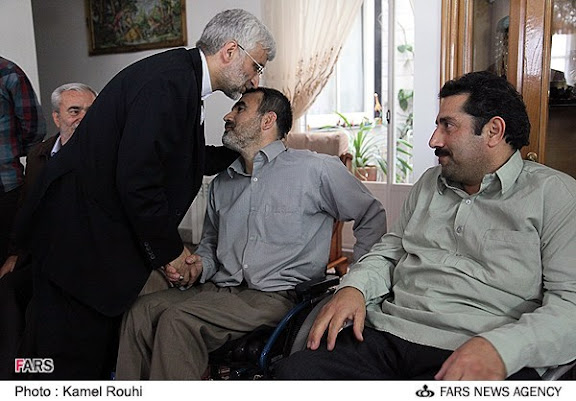 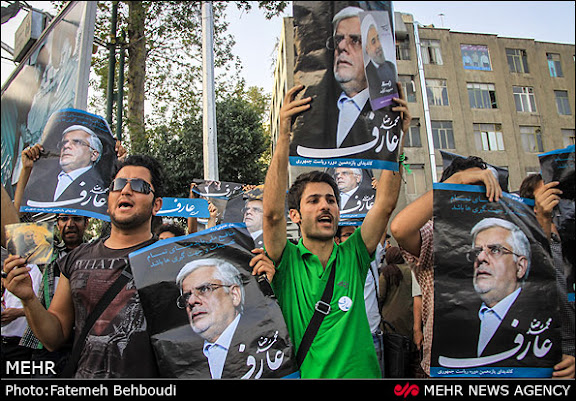 This is great to see the mature and pluralistic democracy in Iran. According to Farsi media, both Jalili and Qalibaf are the front runners and many in the Artesh and Sepah will vote for them due to their heroism in the jange tahmili. Iran is lucky to have such great patriotic people who were willing to sacrifice their lives for the honor and defence of its sacred land. There is going to be a very large and enthusiastic electoral turnout. IRAN PAYENDEBAD.

All these candidates have the NATION in THEIR HEARTS unlike candidates of some beacon of democracies who enter pre- election pacts with lobbies and and even bizarre sects!!, who guarantee their win such that when in power,they bend and kneel to the whims of these shadowy groups at the expense of good service delivery!!.

This election manifests the structural flaws of the Iranian political system more clearly than ever before. A small body of ultraconservative clerics, given the group title of the “Guardian” Council, is given the authority to select who can run for office and prevent anyone from entering the race. They do not need to provide any reason for their decisions, not even a single sentence announcing on what basis they rejected anyone and selected these eight. Until and when the Islamic Republic has such a body controlling its presidential and parliamentary elections, the system remains a theocracy, ultimately controlled by reactionary forces that want to prevent political openness and participation by reformist and moderate forces in the political process. This is the 21st century. The existence of the Guardian Council prevents the country to realize its political development and progress it deserves and needs.

But the “selection” by Janati and his gang and their powerful supporters are already made. The Iranians have been given a list of eight men to choose one for president. And I certainly hope they choose the person who is most inclined to accept political openness and democratic participation by different groups and individuals. The smaller the trusted circle of individuals and political groups get, the weaker politically the Islamic Republic will become, forcing it to rule by reliance on its security forces. If the past is any indication, that is not very smart.

You wouldn't know the meaning of democracy if it landed on your head.

The majority of Iranians know what a farcical charade these selections are.

As long as these theocratic shysters have total control and power over the media, democracy or even a half baked democracy will not previal.
A bunch of Rozeh Khoons and their minions have had a luckey break in Iranian history by seizing power through trickery as well as gangster tactics to impose their bigotry and nonsense on the nation.
No one with an ounce of sense should believe in these charlatans.

My own correction when I said the Rozeh singers have had a lucky break in Iranian history.....

I see anon 7:35 that your exorbitant tolerance of other peoples opinions makes you a specialist on democracy.

It is a mess even after the selection by "Guardian Council"

9:33 AM...Unfortunately your opinion reflects the dictatorship in Tehran.If the regime sat back and allowed true democratic elections without their armed goons then they will see the end of the regime within 24 hours.So your sarcasm doesn't amount to a single bean.

Nder Jaan,
While one cannot in any form or shape compare the "Iranian Style" of democracy with those of some European countries where you do see meaningful democracy in action, I can give a higher mark to these political jestures when I compare them with some other countries that do not have ANY elections at all(and those are often fully supported by our beloved western democracies !). As someone in a previous comment said "... candidates of some beacon of democracies who enter pre-election pacts with lobbies and even bizarre sects...." cannot be much better than these 8 "Rozeh Khoon". Although the debates that I watched were "jokes", I still could find some of characters better than others on certain issues. Let's hope that we get a less rotten one from this gang of 8 ! Az in MD

The selections in Iran are just that selections.That means the president of the country has as much power as Khamenei's tea boy.Once you understand this political flaw then you know not to waste your time trying to legitimize the corrupt dictatorial theocracy by "voting".

Is someone ignorant to the point of thinking that there can be any real sort of "pluralistic democracy in Iran" when nobody is allowed to run for office unless pre-approved by some tiny group of reactionary priests all of a single sect?

Dear B.M.A at 6:00AM
Those who complain about a lack of democracy in the Islamic Republic, should read recent revelations about spying on "citizens of the WEST" by their "DEMOCRATICALLY ELECTED representatives and their GOVERNMENTS", which bring false claims, misery and wars to the world and the wellbeing of humankind...

A.F!
Indeed the spying 'scandal' is one of the many episodes the Obama administration has got itself into which clearly shows how 'democracy' Leaders ONLY PRETEND during campaigns!!.

I rather have them check my e-mails and phone calls than being blown up on a buss or the underground in London or if taking a flight by your "brothers and sisters" !