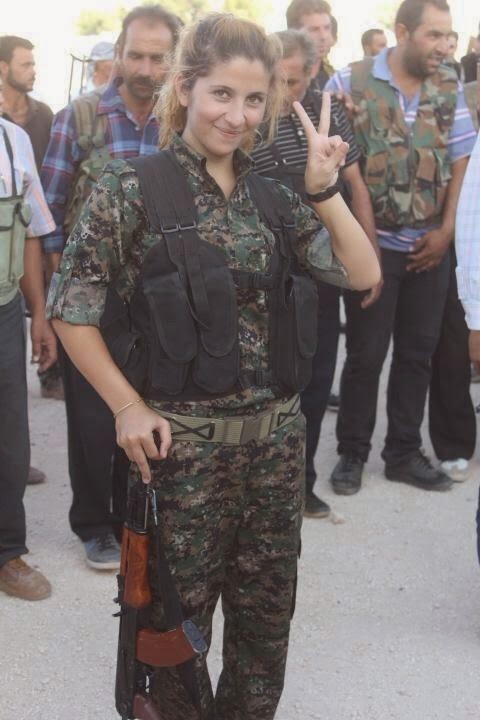 The Islamic State insurgents have been stopped for now in Kobane by the Kurdish People’s Protection Unit (YPG) fighters, and ISIL militants have withdrawn overnight from several areas in the city, the Syrian Observatory of Human Rights reported today.

Kobane has been under attack by nearly 10,000 Islamic State insurgents, armed with tanks and heavy artillery for nearly a month. Some 2,000 YPG fighters, without access to any heavy weaponry, countered ISIL invaders valiantly, and with the help from the U.S.-led coalition’s continued bombardment of ISIL positions at Kobane, the YPG has prevented ISIL to overrun the city for now.

Important to note that YPG ranks have been steadily filled by women fighters; and a very large percentage of the YPG fighters are women: Kobane is yet to fall, and the women fighters of YPG have a lot to do with this success.

obane has become a meat grinder, drawing a relatively large, continuos flow of ISIL combatants into the fight for the town, to be subjected to American combat aviation bombardment.

Apparently those ISIL commanders are ignorant of Operation Niagara and the Battle of Khe Sanh. Let's hope they're subjected to the tactical "lesson plan" applied to the NVA back in 1968.

@Brig. Gen. Basrawi, Why not call it by its Kurdish name Kobani. Did any Arab help the people there? There are Kurds that are fighting and they like to name it Kobane. It is their land. So call it what they call, and show some respect to these brave people. If It was Ain-Al-Arab it was blind by now. It is still shining because it is Kobani!

Well, you should know that the town's official name is Ayn Al-Arab. Just as the body of water that lay between the Arabian peninsula and Iran is officially known as the Persian gulf. Also, as an Arab i naturally refer to the town by its Arab name. Just as you Iranians say Arvand rud when you talk about the waterway that makes up our common border. Personally i don't mind that the Kurds call the town Kobane, because they have lived there for centuries, therefor a Kurdish name is natural for them.

@Brig. Gen. Basrawi, well said. Hopefully it will officially change name after these conflicts. I don't see the Kurds fit in Syria,Turkey and Iraq (and may be Iran if they wish) .

Well the Kurdish women are fighting better than most men in the area. However, the Kurds should not get their hopes up as they have been played for suckers since the time of Mullah Mustafa Barzani who was tool in the hands of the Shah and CIA/MOSSAD fight against Iraqi Baathists and later Saddam. The Kurds are victims of history, geographically and Sikes-Picot agreement that is fast unraveling.

Actually, Battle of Khe Sanh saw the use of American strategic bombers (B-52) flown in a tactical role with great effect, as is the case (B-1) now in Kobane.

The only times IqAF strategic bombers (in the Soviet sense, Tu-22 and Tu-95) were flown in a tactical role they attained mixed results, at best, and usually worse.

And IqAF tactical aviation never in itself rendered a decisive factor in a campaign during the Iran-Iraq War, as did Arc Light and TAC CAS operations during the Battle Of Khe Sanh.

IS fighters are steadily advancing, having pushed back the YPG, and now control more than half of Kobane.