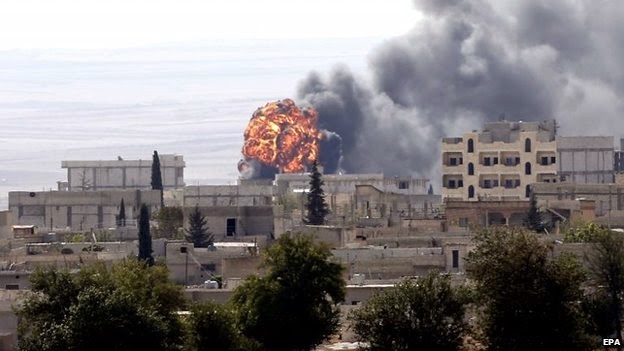 Islamic State insurgents have reached the outskirts of the Syrian Kurdish town of Kobane in the early hours of Sunday, Kurdish activists reported. A fierce battle between the insurgents and the Kurdish fighters led by YPG began at around midnight local time at the southern gateway to the town. But despite U.S. airstrikes on IS positions, the insurgents apparently reached the outskirts of the town at around 2 AM on Sunday. The battle could now take place on the streets of Kobane. (Twitter/@Rodi_Khalil)

File photo: Fire and smoke rise from a building in the Syrian Kurdish town of Kobane; 3 October 2114 (EPA/BBC)
Posted by Nader Uskowi at 7:23 PM

Meanwhile, forces loyal to or allied with Syrian Arab Republic are making gains toward the investment and siege of insurgent-held areas about Aleppo.

Some observers are pointing to the withdrawal of JAN positions (due to American airstrikes) as a factor in this developing military situation.

right now its looking really bad. as a matter of fact its almost over. its just like the holy defense - Irans defeat in khorramshahr, susangerd, hoveyzeh, bostan, mehran, qasr shirin, sarpol e zahab, dehloran and so many other places. but iran gathered strength and so succeeded get those towns and cities back. one day kurds can take back kobane and nearby villages.