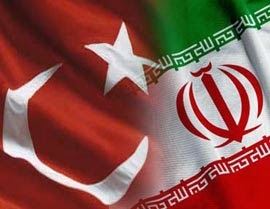 “Turkey does not need to ask permission from anyone while taking measures in line with international law against threats to its national security,” said Tanju Bilgic, spokesperson for Turkish foreign ministry.

“Turkey denounces remarks by Iranian officials, who should remain silent out of shame over the situation in Kobane and the humanitarian tragedy in the region as Iran supported the Syrian regime that is the main cause of the terror problem,” Anadolu News Agency quoted Bilgic as saying.

Iranian forces and their allied Shia militias in Syria have not come to the aide of the Kurdish fighters in Kobane.
Posted by Nader Uskowi at 8:45 PM

Turkey and Iran is engaged in a tug-of-war...competing over influence, herding proxies, funding terrorism etc etc. However military conflict is brewing between these two rising nations. In the not so distant future these two main actors of the region will fight it out. One will stand as the Victor, if nothing else then at least in a military sense. The other will be military defeated, resulting in much less influence and power projection in the Middle East.

"Iranian forces and their allied Shia militias in Syria have not come to the aide of the Kurdish fighters in Kobane."

Kobane is only a few kilometers from the Turkish border, where currently Turkish Army M48 tanks sit idle.

The nearest Iranian-allied military positions are roughly 150 kilometers away from Kobane, separated by hostile held territory.

Mark PyruzOctober 18, 2014 at 3:23 AM
Well said,the turks are in a far far better position to help the kurdish forces in kobane than either iran or syria and yet they do nothing,I would also add that iran and syria have done far more to fight and stop isis forces in iraq and syria than turkey has done

The Iranians are saying that the Turks were not helping Kobane, that was the subject of the post, and the Turks are responding that Iranians are not doing anything either. Both are right. Neither Iran or Turkey are doing anything to help the embattled Kurds in Kobane, although both have armed forces and allies either right on the border or in the country.

Iranian forces do not have to cross 150 km hostile terrain to reach Kobane. If they want to do so, their special forces could reach Kobane through many routes, including Iraqi Kurdistan. Let's not make excuses for them when the Iranians themselves do not make such excuses.

Kobane was a strategic blunder for ISIL. These insurgents can occupy cities like Mosul easily where segments of local population are sympathetic to their cause. They have a tough time occupying cities with hostile inhabitants.

Turkey and Iran also made strategic mistakes in not aiding YPG in their fight against ISIL. Major blunders. Kobane is becoming another Stalingrad.

Why? Turkey has been the loser thus far in the debacle. They have alienated themselves from Syria, Iran and Russia, resparked tensions with the Kurds and are now known globally to have semi-warm relations with IS. Erdogan is making himself to look like more the Islamist autocrat with every passing day, allowing for safe passage of IS militants through Turkey and jailing journalists and political activists. What has Turkey won?

Nader UskowiOctober 18, 2014 at 11:18 AM
In order to cross iraqi kurdistan they would need the permission of the kurdish government and would likely also seek the permission of the iraqi government as well unless you think that irans military forces can simply go where they will borders and sovereignty of neighbors be damned,no one is making excuses they are simply pointing out facts that you seem very reluctant to acknowledge,that when it comes down to it the turks were in a far better position to act militarily in the aid of kobane than iran was yet they did nothing at all

" They have alienated themselves from Syria, Iran and Russia..."

this is a good thing. Syria, Iran and Russia are led by vile authoritarian regimes and are to isolated sinkholes and a very weak and discredited Russia.


Turkey's economy is strong and it will continue to bid for great influence in the Middle East as it seeks to market its manufactured goods throughout the area.

They've got "permission" to fund and direct operations of thousands of militias in Syria and Iraq, why not in Kobane? are you saying that Assad would not give the Quds Force the permission it needs? Are you kidding me?

Nader UskowiOctober 19, 2014 at 1:40 AM
And what does that have to do with getting the permission of the IRAQI government to send forces across its territory,its one thing for iran to aid iraqi forces in iraq its quite another to march an iranian military force across iraqi territory to intervene in syria/kurdistan.The simle fact is that kobane is simply not a military priority for either the saa or iran,they are certainly not going to strip fighters from the main battlefronts in aleppo and damascus or iraq,meanwhile the turks have a large military force a few kilometers from kobane that just sits there doing nothing

AnonymousOctober 18, 2014 at 5:18 PM
The turks with their "zero problems" foreign policy have managed the amazing feat of pissing off practically everyone in the region ranging from israel to iran,and you have to work pretty hard to do that.The simple truth is that turkeys neo ottoman policies have been a disaster for turkey

Agreed. That's been my argument: Iran's priority in Syria has been leading the fight against the opposition in defense of Assad's regime; and not fighting ISIL in defense of Kobane, the Kurds or other people of Syria.

very easy to annoys other regional aspirants when you start to assert your own muscle.

Turkey's "economy" depends on handouts from Arab countries in the Persian Gulf...Once they stop their funding, everything collapses in Turkey.. Read a bit more on Turkey's deficit and you'll understand before making silly comments... The Gulf Arabs have the Turks by their balls..Which is why they do everything they're told to do...Beggars can't be choosers!!!