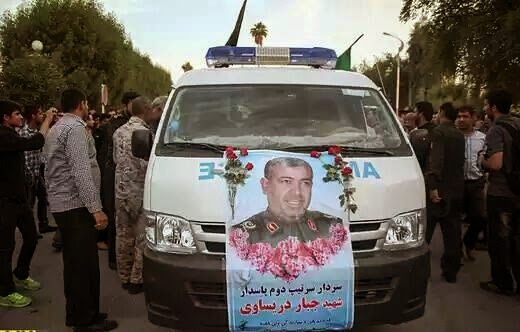 Gen. Darisawi was killed in action in Aleppo, Syria. He was the commander of IRGC Basij forces in Kuzestan province. It was not known when he was deployed to Syria, and the Iranians did not disclose the circumstances or the time of his death.

Darisawi becomes one of the highest ranking Iranian officers killed in action in Syria defending Assad and his regime against the opposition. Since December, two other general officers have also been killed in Syria, Gen. Abdullah Eskandari and Gen. Mohammad Jamali.

what is the correct Persian spelling of the name ; Darisawi or Edrisawi ?

have many young Iranian men were sent to their deaths to defend the vile Assad dictatorship?

Appears to have held rank of brigadier general 2C.

There were rumors IRGC had abandoned Syrian theater in order to shore up Iraqi theater (from Iran/Iraq/Syria perspective). That is obviously not the case.

I don't know how the Iranians operate, but obviously many high ranking generals are in the front line as warriors. This is normally the case when you deploy "advisers" for assessing the situation and shaping up the resistance. But one thing is sure and that is the fact that the Iranians/Syrians have intelligence leakage problems, otherwise you could not kill high ranking generals this easily.
Iran has continuously since 2006 relied on Assad regime's intelligence on the situation and that has shown to be a grave mistake time by time.