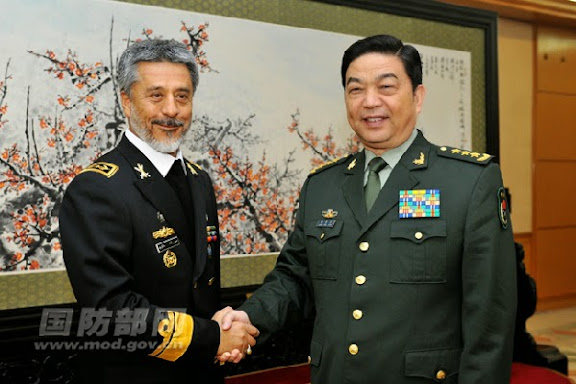 According to Xinhua via Ministry of National Defense The People's Republic of China:

Chang said the two armed forces have seen good cooperation on mutual visits, personnel training and other fields in recent years. Exchanges between the two navies have been fruitful and their warships have paid successful visits to each other.

Praising the achievements of the Chinese Navy, Sayyari said Iran attaches great importance to its relationship with China and is ready to enhance bilateral exchanges to push forward cooperation between the two armed forces, especially in naval cooperation.

COMMENTARY: According to DefaPress, IRIN Commander Rear Admiral Sayyari visited the North Sea Fleet Headquarters at Qingdao Naval Base on the second leg of his China trip, aimed at strengthening military ties and bilateral cooperation between Tehran and Beijing.

China's People's Liberation Army Daily separately reported that Sayyari had been given tours of a Chinese submarine and warships, where he "listened to an introduction on equipment ability and weapons systems". [source: Reuters]

As reported by UOI, earlier in the week Rear Admiral Sayyari met with Commander of Shanghai Naval Base Senior Captain Wang Yung, of the East Sea Fleet (ESF). 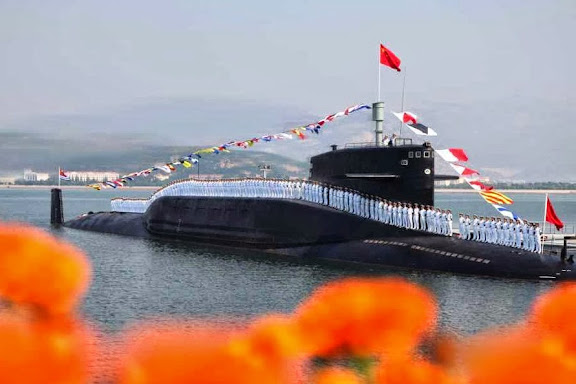 Iran is looking to increase its submarine fleet heavily. The plan is to increase the Kilo class fleet to between 12 to 16 subs. Iran is further looking to have between 1-3 nuclear powered submarines in the future. For all these strategic investments, Iran is looking for cooperation with both China and Russia. Most probably this includes both purchasing of submarines but also joint development.

Russia and China have effectively secured their own interests (energy needs) by granting Iran the status of vassalage. Iran get to pick whatever cheap/low quality products and foodstuff on offer by the two super Powers. In return they get massive amounts of oil, gas, iron ore, and various minerals. Also the military equipment and weapons that get cleared for export to countries like Iran, are downgraded versions, equipped with less sophisticated electronics that make it far less capable than the original.

Iran's present regime will be building new bus depots on Saturn (and Pyruz will have artist's rendering real soon) before they possess a nuclear submarine.

That is your opinion. Mine is different... all super powers secure their national interests first and give whatever is left over to others. So if you have F-16, then it is downgraded, if you have German subs then the export version is downgraded etc. So the difference between them at the end is minor, what is important is to make your own path based on policy which maximizes your own game while dealing with super powers. The Shah was completely US oriented and we saw his destiny, these guys seem to be China/Russia oriented and time will show this is not an optimized path either. You have to deal with all super powers and keep your own national interests in focus.

AnonymousOctober 25, 2014 at 4:13 PM
That may have been the way it was when the soviets supplied downgraded weapons for free to its vassals/allies during the cold war but these days if you have the money they will sell you virtually whatever you want one only has to look at the sales to india and china to see that not to mention the sales of su30s and sa23s to venezuela or su30s to vietnam etc.. and none of those were downgraded,as for "vassalage" the best examples of that that I could think of would have been pahlavis iran or the arab dictatorships and turkey today

AnonymousOctober 25, 2014 at 8:08 PM
Who would have thought 20 years ago that iran would be designing and building its own submarines and nuclear reactors,I think long before we see anyones "bus depots on saturn" we`ll be seeing an iranian nuclear submarine,certainly within the next 5-10 years we will see iran designing and building subs in the kilo class the next step after that is designing a reactor to power those hulls,who knows what iran will be building and operating in the next 10-20 years,one only has to look at irans nuclear industry to see irans potential,20 years ago iran had no nuclear industry now iran has mastered every step of the fuel cycle from mining the raw material through to producing fuel assemblies for reactors and it did almost all of it with very little help from anyone

It is not an opinion. It is a fact. Iran earned vast amounts of money before the hardest sanctions went into effect in the middle of 2012. Iran made $114,75 billion in 2011! Two years laters that sum has been halfed! Before 2012 the Chinese and Russians had no other option but to pay Iran in hard currency, and lots of it, in exchange for importing oil. Now they are aquiring Iranian natural Resources through a bartering system, which means dirt cheap. Iran's oil, gas, and what have you, is being given away for peanuts. What Iranians get in return is not even close in measuring up to the value of what is being grabbed by these two superpowers.

who says that Iran has designed and built a reactor? is it a secret one?

AnonymousOctober 26, 2014 at 7:56 PM
Theres nothing secret about it the Arak reactor is iranian designed and built

LOL! No. Venezuela and Vietnam - they recieve downgrade (monkey models), as do Iran (the Russians actually don't trust the Ayatollahs). India is another matter, it is a true friend and ally of the Russians and a huge bulwark against Western imperialism. Iraq is also a country on the rise recieving the latest hardware from the Russians. There's competition there between American sales versus Russian ones, therefor the Russian put their best stuff on offer.

"Theres nothing secret about it the Arak reactor is iranian designed and built...."

the design is by the Russian
research and design institute NIKIET.
NIKIET and a Russian company in Obninsk provided technology for the Arak reactor.

AnonymousOctober 27, 2014 at 9:18 PM
Actually no it isnt,at most the russians might have provided some very limited help chiefly with the modifying of the rbmk fuel bundle design for the ir40 and even this claim is based on an isis report which is not exactly the most reliable source,they in turn base their claim on a picture of ahmadinejad with a fuel assembly and reports from unamed "knowledgeable officials" in the us government,also NIKET has no design experience with designing heavy water reactors so the help they could`ve provided was pretty limited,according to the russians iran only asked questions to which they provided answers.The vast bulk of the ir40 is iranian designed and built

Nothing is secret. Iran is a nuclear power and no one can deny that. There are thousands of well educated skilled engineers who are working days and nights to get Iran independent and it is obvious that it will take time for Iran to build it own subs and they know that China and Russia are focusing on their interests and they will not give anything to Iran for free. Iran needs two things, get everything well organized and structured and have right leadership and right brains (the one who are really willing to sacrifice his/her time and life for the nation. And of course there are lots of them.
Russia and China should help Iran otherwise they will loose an ally