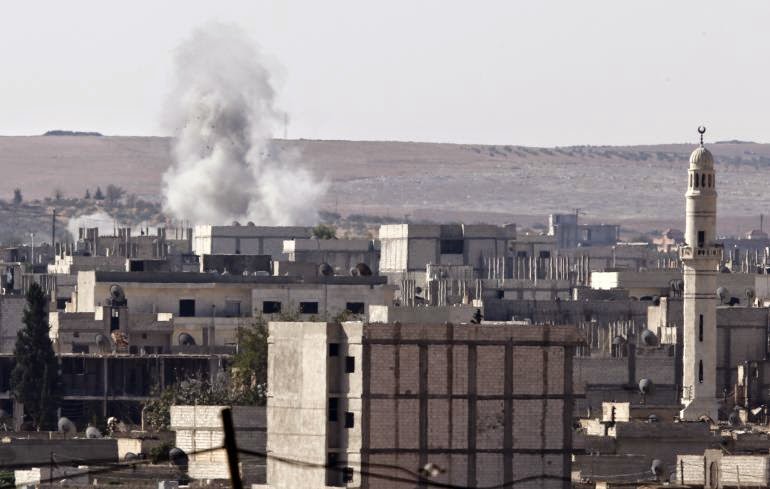 “We urged you to use all the capabilities of the Quds Force to prevent this crime (ISIL’s victory in Kobane),” Basij Student Organization said in a letter addressed to QF’s Gen. Soleimani, copied to Iran’s Foreign Minister Javad Zarif. (Fars News Agency, 9 October)

The letter warned against “inaction” in Kobane. (FNA)

Nader, do you have an URL for this Fars Persian article? I can't seem to find it.

Yesterday, I published a post on why Iran’s position on Kobane was so contradictory: Rouhani accuses the West of “passivity” in defending Kobane; yet Iran’s own Quds Force, which commands thousands of officers and militia members in Syria and Iraq, is standing idle when it comes to defending Kubane. I was told by some commentators that my criticism was “odd,” that I did not understand the logistics involved, that I was needlessly blaming Iran, that YPG fighters were close to Assad’s opposition, and in a non-published comment (because of use of choice language) I was even accused of putting up a trap for Iran by getting involved in Kobane. Now that the Basij members are expressing the very same concerns that I expressed in the post and in my comments, I am interested to see the reaction of my critics

First and foremost it would be up to the kurds to specifically and formally request irans help,iran would then have to clear this with the syrian government and only then might iran act,even then it would likely be as a supplier of advisers and weapons and logistics to the kurdish forces themselves just as they did in iraq rather than supplying large numbers of frontline troops to take on isis directly.Iran quite rightly wants to avoid committing large numbers of troops that would run the risk of being bogged down in some never ending nato afghanistan style insurgency,which iran no doubt suspects is one of the goals of the west in syria

And all these criteria only for Kobane? Are you saying the Quds Force's involvement, directly or by directing hundreds of Basij Force members and thousands of Shia militias, in many fronts in both Syria and Iraq do not pose risk for them, only their involvement in Kobane would pose those risks? If not, and if the risks are present in all those fronts, then why did they suddenly become risk averse when it came to Kobane?

Well, it should be obvious to everyone why Iran is reluctant to commit its own forces in preventing fall of Kobane. Iran would have engaged by now if it thought that it could win. The truth is Iran don't believe they can gain a victory or prevent ISIS from taking Kobane. They have calculated that it's not Worth risking a defeat at the hands of ISIS. Iranian regime & armed forces have in the past had trouble quelling or desicively defeating Kuridsh insurections or uprising in Iranian Kurdistan. IRGC have suffered alot of casulaties in Iranian Kurdistan, against a few thousand ill-equipped PJAK fighters. How do you think Iran will fare against the richest and most numerous militia force currently around. Try to picture an IRGC or Basij expeditionary group which could possibly experience the same scenario as SAA brigade 93 or so many other Syran army detachements, that were besieged and forced into surrender. Imagine the loss of face for the regime in Iran.

Nader Jaan,
Your post of yesterday, as some of the commenters rightly said, was expecting a bit too much. Any engagement by the Quods Force at this stage is just insane and a definite suicide. And now that a request has been made by a group of students (only from the Fars region) you have been encouraged to repeat your recommendations. You know very well that none of the coalition countries who have their boots in the sky and not on the ground want to see any role played by Iran. These are the very same countries that either have funded directly or indirectly the creation of ISIS or have stayed idle for a long, in spite of their impressive intelligence apparatus. And even Turkey, with all its NATO might, has been dragging its feet in doing anything at a time when Kobane has been [read today’s Washington Post where it is reported that “….U.S. frustration rises as Turkey withholds military help from besieged Kobane … “

Seems more like a growing number of younger Basij members are willing to take a moral stand to defend Kobane, despite the political and military implications that it would have for Iran, as stated by Anon 5:03, that are probably a source for the regime's current reluctance at facing ISIS directly here. The regimes foreign ministry spokeswoman has officially said that the country is awaiting a direct request from the Kurdish representatives to move in more radically, possibly an attempt both at winning some time in order to debate possible actions and evaluate immediate outcomes, and a desire to optimize recently-gained positive relations with Iraqi Kurds they helped even further by hinting at sovereignty concerns towards them. In other words, all cold geopolitical calculus supported by the usual silver tongue in an unusual context of paradoxical alliances while facing a common foe.

The essence of my argument in the 8 October post was the inconsistency of Iranian position on Kobane: Rouhani accusing the world of "passivity," yet the country's QF is a symbol of "inaction" in Kobane. That was my argument and I believe I was right. I do not expect anything from IRGC/QF. If the government has decided not to intervene in Kobane, for any reasons, then it should stop criticizing others for not doing much!

My comment was not posted for some reason, I will thus attempt to re-phrase it here.
--

I am afraid I have to disagree Mr Uskowi,

as the core argument contained within your previous post stipulated instead that the Iranian regime as a whole, monolithic bloc was either hypocritical or inconsistent with its own public narrative towards possible involvement in Kobane. This news of a relatively smaller and less relevant entity such as an association connected to the younger Basij willing to fight and in doing so go against the public message displayed by IRI representative only shows that in you were too fast in your judgment and that indeed in Iran, too, internal debate is ongoing about this pressing matter, and arguments and counter-arguments are currently being made for or against the case for intervention. The Pros obviously see no problem in extending the current battlefield for the IRGC to this side of the border as you suggest they should do to remain consistent, while Cons probably point out to the many risks and difficulties implied in behaving as such, as put out by a number of your "critics", including myself, on the other article, plus a lot of additional factors pertaining to an overall behind-the-scene picture that none of us in the public have the necessary details to think about, not being in charge obviously. If anything, they prove some of your critics quite right by proving that an element of the ideological backbone of the regime is willing to be consistent with its leaders' speeches, and not the other way around.

Besides, what is the point in being that mad against Iran in particular ? does its position, for whatever it is worth, constitute such a disgracious act in comparison to NATO members unwilling to seriously clean a mess they have been instrumental in creating themselves, namely Turkey and its huge and capable NATO member army literally overlooking the action without moving an inch ? I understand that "this blog is about Iran" as you remind us quite often, but it has lately become more a kind of "why Iran is always wrong" than anything else...what is the point in insisting on such alleged inconsistency/hypocrisy/dishonesty in such an obstinate fashion, post after post ? do you still expect such qualities to be produced by a single actor in this whole scenario since it ever started, or anyone to be "consistent/fair/honest" ? Is the US honest ? is the EU ? is the GCC ? is Turkey ? Is Iran/Syria/Russia ? the answer is a big no, but we all know much better than to expect otherwise from intervening states when such crucial geopolitical gains/loss are at stake for everyone, don't we ? When it comes to foreign policy and the middle-east such words should be banished... only short and midterm interests matter, and the PR that comes with it, and Iran is no more guilty than any other party in practicing this "art"....

When you don't like the message, you attack the messenger. You did not like what Basij Student Organization said, then you call them less relevant and relatively small. But you don't ask the question that how this small, less relevant organization could have its letter to Soleimani published by Fars News Agency, and later on Qudsonline. The publication of the letter by those heavyweight agencies make it more than simply a letter to Soleimani.

And I stand by my criticism of the government for criticizing the world for not doing enough to save Kobane, while its own Quds Force, with its major presence in Iraq and Syria, and hundreds of Basij Force members and thousands of Shia militias and the Lebanese Hezbollah under its direction, keep fighting the opposition to save Assad, but stand idle against ISIL in saving Kobane, what the letter warned as their 'inaction." If Iran believes it should not send its troops and militias already deployed in the two countries to save Kobane, for any reasons, then it should stop criticizing the world for not doing enough.

But thanks for all your critical comments. Let's hope Kobane will be saved, one way or another.

" Let's hope Kobane will be saved, one way or another."