Above: satellite imagery claimed by Israeli source to depict before and after 05OCT14 explosion at Parchin military compound

According to Ronen Solomon at Israel Defense:


Satellite images of the Parchin area, to the east of Tehran, prove: the explosion reported by the Iranian media had, indeed, occurred inside the military compound in Parchin, where, according to western intelligence agencies, trials are being conducted on nuclear missile fuzes. Satellite images obtained by Israel Defense and analyzed by specialist Ronen Solomon clearly show damage consistent with an attack against bunkers in a central locality within the military research complex at the Parchin military compound.

The locality in question is situated at the center of the compound, adjacent to another installation where, according to intelligence sources, the trials being conducted involve controlled detonation of fuzes intended to serve as triggers for nuclear devices. The locality consists of a sizable testing center and what appears to be an area with bunker-shaped structures. "Before and after" images indicate that a complete section of structures was simply eliminated by an unexplained explosion.

The explosion wiped several testing units off the face of the earth while inflicting collateral damage on adjacent buildings, with traces of fire clearly visible in a section located in a sparsely afforested area.

Now Israeli sources are claiming a link between the Parchin military site, the 05OCT14 explosion, "nuclear missile fuzes" and an "attack."

This event and subsequent Israeli claims take place leading up to and during a time of meeting between IAEA and Iranian officials in Tehran, and upcoming P5+1 nuclear negotiations set for next week in Vienna. 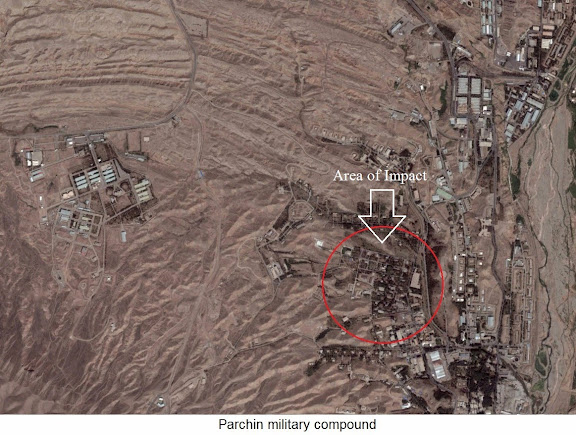 Above: Israeli-sourced imagery claimed by Israeli source to depict "area of impact" from 05OCT14 explosion at Parchin military compound.

Imagery: Israel Defense
Posted by Mark Pyruz at 4:00 AM