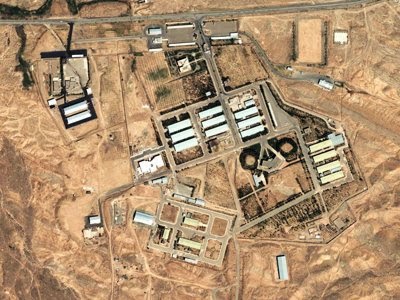 An explosion rocked the Iranian capital on Sunday, with an enormous orange flash illuminating Tehran at around 11:15 p.m. local time.

Iran’s Defense Industries Organization officials said that two workers lost their lives as a result of fire and explosion at an “explosive material production unit” east of Tehran, the semi-official news agency ISNA reported.
The Defense Industries Organization (DIO) is a conglomerate of companies run by Iran’s Ministry of Defense and provides the Iranian military with the manufacturing and technical capacity. The announcement of the incident coming from DIO indicates that the incident was defense industry related and happened at a military site.

Iranian website Salamnews reporting on the same incident said the explosion at the site was so intense that shattered the windows of buildings 15km (nine miles) away.

The BBC, quoting a pro-opposition website, said the huge blast occurred near Parchin military site located east of Tehran. Iranian official sources have denied that the explosion had taken place at Parchin.

Witnesses in east Tehran confirmed that windows have been shattered in the vicinity of Parchin, and all trees in a hundred yard radius of two nearby villages of Changi and Hammamak were burned. (The New York Times, 6 October)

If the eyewitness accounts are accurate it sounds a lot like the ammo train explosion we had up north in Roseville, California during the Vietnam War:

why doesn't it remind you of something from the US Civil War or England during the blitz?

on the other hand, why should it remind you of anything at all, as you don't have any real idea of what happened at this point?

Iran explosion: An accident or a reminder ?
by Jennifer Rubin (slimeball writer for WaPo)

It is unknown whether this was an Iranian accident or sabotage. As one Iran expert put it to me, “Never underestimate the Iranian regime’s capacity to screw up on its own without the involvement of foreign intelligence services.”

1) As stated in my comment, the reminder is based on the accounts provided in the reporting (if accurate).

2) The blast in Roseville occurred in my lifetime, with a number of friends from my university days living within proximity of the blast.

3) Both tragedies are blasts related to military munitions.

You asked, I answered.