Iraqi Army Pulls Out of Heet Military Base 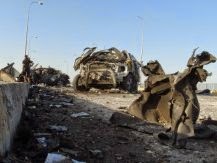 Iraqi troops stationed on the edge of the city of Heet in the restive Anbar province have withdrawn to Asad Air base, northeast of the city, leaving Heet, on the Euphrates, under full control of the Islamic State.

“Iraqi forces evacuated Heet camp last night (Sunday) on the orders of the military command,” said a senior Iraqi official in Ramadi. “They would be used to shore up the defense of Asad Air Base.” (AFP, 13 October)

Asad is a major military base and one of the last still under government control in Anbar. Military aircraft picked up senior officers from Heet base, and the rest of the force drove in a convoy to Asad.

Government forces have suffered a string of setbacks in Anbar in recent weeks, and the provincial capital of Ramadi could be overrun by ISIL. The insurgents already control parts of the city.

General Dempsey, the chairman of the Joint Chiefs of Staff, said in an interview with ABC’s “This Week” on Sunday that the insurgents could blend in with disenfranchised Sunni population of those towns and villages, raising the chances of attacks against targets in Baghdad. Although he added that an outright assault on Baghdad remains unlikely.

Dempsey  also warned of possibility of indirect fire on Baghdad.

“I have no doubt there would be days when they use indirect fire into Baghdad,” said Gen. Dempsey. (ABC/NYT, 13 October)

Indirect fire refers to the use mortar, rockets or artillery from a distance.

File photo: The carnage after car bombs in Ramadi, September 2014 (AFP)
Posted by Nader Uskowi at 10:12 AM

It is disgraceful that the $25 billion US trained Iraqi "army" is turning out worse than the South Vietnamese puppet ARVN, who at least fought till the NVA tanks broke into the Presidential palace in Ho Chi Minh city (Saigon). The Iraqi military seems to have been trained for a reverse marathon and also an serves as a severe indictment of US tactics and "training". The ISIL forces seem to have hybrid training but very high motivation in contrast, and also should be pointer to Iran to let the Arabs and Kurds sort out their mess. Iranian mullahs need to stay the hell away from unending Arab fratricide. Iran should not running a dying dog in this fight.

"Indirect fire refers to the use mortar, rockets or artillery from a distance."

With respect, indirect fire refers to aiming and firing a projectile without relying on a direct line of sight between the gun (or launcher) and its target, as in the case of direct fire.

Here is a fairly decent explanation: