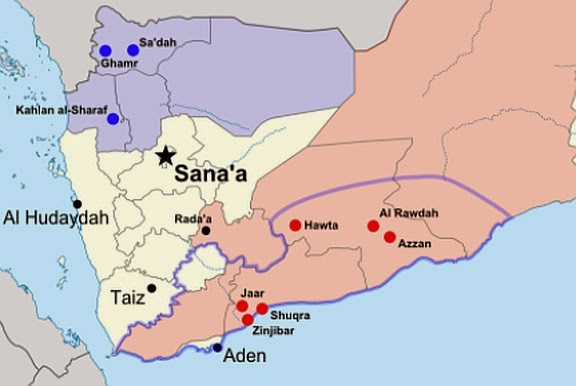 
Yemen's Shiite rebels on Friday overran an al-Qaida stronghold after days of battling the militants for the city in the country's central heartland, a Yemeni official and a tribal leader said.

The capture of the city of Radda, in the in the province of Bayda, came with the help of a Yemeni army commander, the two said.

The Shiite rebels known as Houthis have been fighting both al-Qaida militants and Sunni tribes over the past few days. The rebels, who in September gained control of the capital, Sanaa, earlier this week overran a key Yemeni port city on the Red Sea.

The Houthis entered Radda on Friday, after the commander of Yemeni army's Battalion 193 gave up his troops positions, a security official and a tribal leader from the city said.

An interesting situation report from Saudi Arabia's perspective on the Shia advances in Yemen has recently been rendered at Al-Monitor:


[I]t is very frustrating in Riyadh to see the Zaydi Houthis and their Iranian friends doing so well in Yemen. From King Abdullah bin Abdulaziz’s perspective, the kingdom is under dual sieges. The first is Iran and its proxies, Hezbollah and the regimes in Syria and Iraq. The second is al-Qaeda and its offshoot the Islamic State (IS) with their strongholds in Syria, Iraq, Lebanon and Yemen.

The Houthi advance threatens to plunge Yemen into the same kind of sectarian struggle that grips Syria and Iraq. The Sunni majority in Yemen and the Zaydi minority are increasingly polarizing the country on sectarian grounds, with the Saudis and Iranians fighting another proxy war along the Sunni-Shiite divide.

Since the United States was Saleh’s ally for years and now backs Hadi, the Zaydis are, not surprisingly, anti-American. Washington’s close ties to Riyadh add to their animus against the United States. A bumper sticker on Houthi vehicles proclaims “Death to America, Death to Israel, A curse on the Jews, Victory to Islam.” At the same time, the Houthis and AQAP are mortal enemies. Just as in Iraq, the pro-Iranian Shiite Zaydis in Yemen are opponents of extremist Sunni ideologues such as IS and AQAP.