Tripoli and Lebanon’s North Under Attack 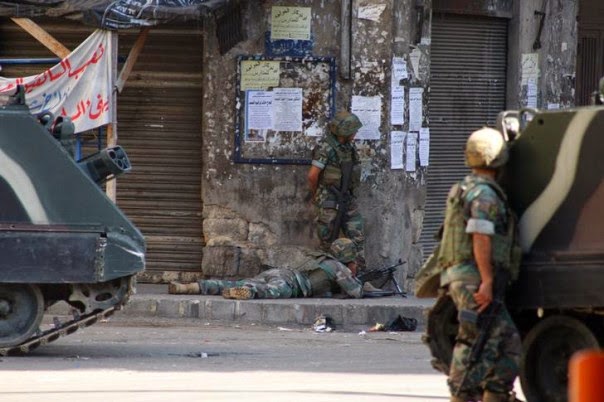 Lebanese army troops battled Islamist militants in Tripoli and across northern Lebanon for a third day on Sunday, Reuters reported today. Militants began fighting the army on Friday. Dozens of soldiers, militants and civilians have been killed in the clashes.

Reuters reported that fighting spread to Arsal, the frontier town in Lebanon’s Bekaa Valley, which militants briefly seized in the summer. The Islamist killed 20 soldiers and captured many more before withdrawing from the town.

Lebanese Prime Minister Tammam Salam called on residents of Tripoli to support the government during “these difficult times” and said the city would not be abandoned. (Reuters, 26 October)

Lebanese security sources told Reuters that the militants include both Lebanese and Syrian affiliates or supporters of Islamic State and the Nusra Front. The insurgents, who are overwhelmingly Sunni, accuse the army of working with Lebanese Hezbollah, a Shia movement and militia force, which has sent thousands of fighters to Syria to fight against the Sunni opposition forces.

UPDATE: The Lebanese Army started evacuating residents from Tripoli districts affected by the fighting, KUNA reported on Sunday. Some Tripoli neighborhoods, especially Bab al-Tabana, have been the scene of fierce fighting between the army and the Islamist militants since Friday.

Its time for realization for Sunni muslims in lebnon that ISIS is nothing to do with Sunni ideology but they are radical Wahabees funded and promoted by KSA. Sunnis are always a mirror of Sufi ideology i.e. peace, harmony and co-existence among societies. ISIS, Nusra front are redical Wahabees and they are carrying out a false flag operation on the name of Sunnis. Sunnis of Lebnon must differentiate themselves from such poisonous Trap of Redical Wahabees. Lebnon sunnis must see what is happening with Sunnis in Mosul in Iraq by ISIS on daily basis, first they killed Shias, Yazidis, Christians but now they are busy to Kill Sunnis on mere suspecion an daily basis, raping sunni girls on the name of Nikah wal Jihad etc. The social fabric of Lebnon is very sensitive, it is real time for Lebnon Sunnis to support the Government before too late as Trap lay by ISIS is working.

I wish the explanation for the upheaval in the region was as simple as you say it is: ISIL being a gang of foreign agents bringing havoc to Iraq, Syria and now Lebanon. But for some of us who have followed the Middle East for a longtime, it's increasingly becoming clear that ISIL is hijacking an otherwise legitimate Sunni social and political movement against corruption, underdevelopment, youth unemployment and lack of hope in future, and a feeling of being rapidly left behind the global trends for human rights and liberty. Mass exodus of secular and literate youths from the region to the West has also left few people to challenge the Islamist extremism on ideological grounds.

Ending Islamist extremism in the region will not happen by military force. Political and economic reforms and investment are needed to bring back the sense of hope in future and normalcy to the Sunni youths. But unfortunately the reality of global economy and politics might not allow for such fundamental approach to the problem. And until then, even if ISIL is defeated in the war, other extremists will try to take the leadership of the perilously dangerous situation in the region, especially among disenfranchised Sunni youths.