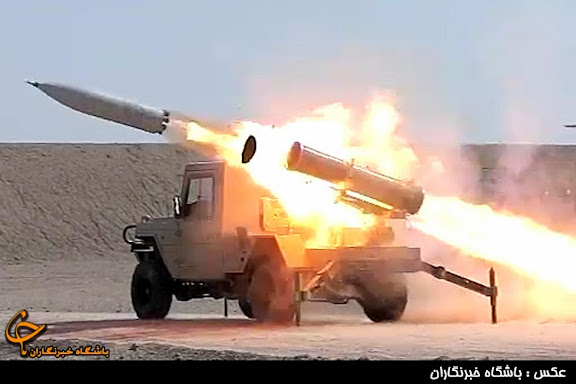 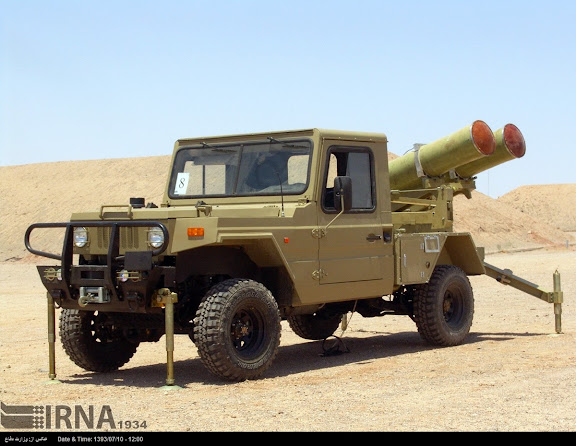 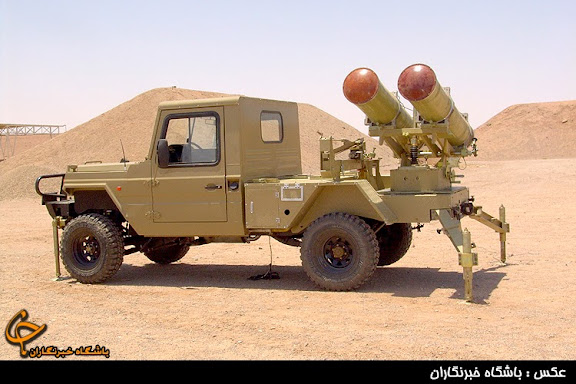 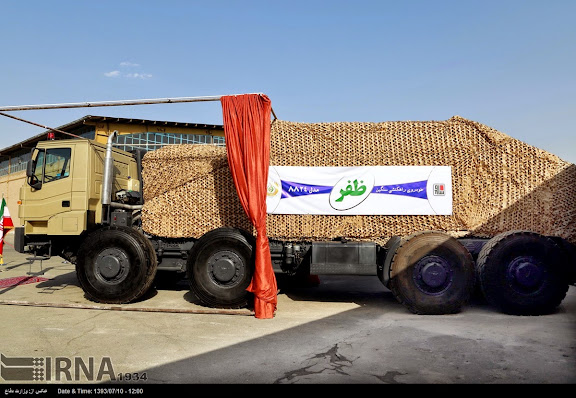 Another defense product of DIO now publicized by MODAFL is the Zafar ("Victory") 8x8 tactical heavy vehicle. Claimed specifications include two steerable axles, an operational range of 800 kilometers and capable of carrying loads up to 24 tons over moderately rough terrain and obstacles. 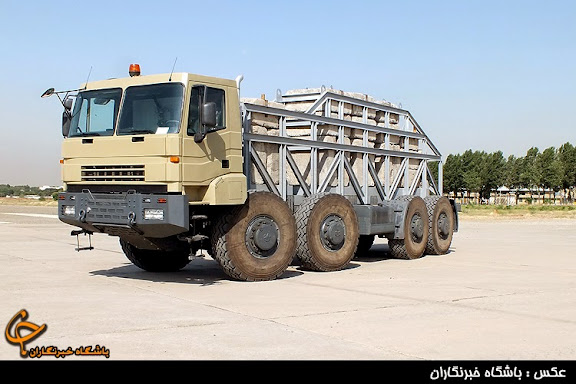 Photos: YJC.ir and Islamic Republic News Agency
Posted by Mark Pyruz at 3:17 AM

These unguided Rockets and Rocket Launchers have been around since 1990's in Iran... What is new then?

In the clip the IRGC officer mentions the target will be "precisely destructed" which indicates some sort of guidance system. Iranian troops utilize tactical UAVs on the battlefield in almost every unit, the UAV can be equipped to be laser designator for guiding missiles, artillery shells and rockets towards targets.

The picture of Launched rocket show no moving surfaces or similar for guiding the rocket, more importantly no Laser seeker/finder can be seen on the Rocket.

Wake me up when Irans Islamic 'Nazi regime' regime builds something better than a toothpaste tube with a primitive rocket motor attached. Yaaawn!

Not in this show, but you need to understand you are not dealing with some idiots who ignore the value of precision. Both these rockets but also artillery shells in the Iranian ground forces are made "smart" for air guidance on tactical field... both ground based but also increasingly air guided laser designators are used. The Iranian Hawitzer 155 based on Larak island in PG has a range of 55 kms and is laser semi laser guided and can fire 8 rounds per minute.

GurneyOctober 3, 2014 at 9:32 PM
Oh,you mean things like liquid and solid fueled medium range ballistic missiles,antiship cruise and ballistic missiles,precision guided munitions,atgms,submarines,sams,armored vehicles,drones,helicopters etc,etc,etc...,in other words all the stuff that iran produces today and all of it pretty far removed from "a toothpaste tube with a primitive rocket motor attached" which by the way dates back to the iran iraq war,I think we can all agree that iran has come a very long way since then

hey Gurney, Mark also shows hundreds of photos of iranians building giant shopping malls and bus depots and traffic tunnels and is rumored to soon be showing the latest in Iranian advanced-designed commodes and sinks with running water, both cold AND hot!

everything's up to date in Iran and on behalf of the entire Lollipop Guild, Mark welcomes you to wake up and see all the progress!!!

Sinks with running water? Hot AND Cold? Been the 70's since I lived in Shemiran but I do remember we had those...

Firstly although Falaq1,2 were designed in the 90s they were never adopted by Iran's armed forces, although they were exported to Hezbollah and Syria. I believe their performance in Syrian civil war proved their worth in infantry support and etc. so Iran's armed forces began ordering them.

Secondly these unveiling is about the new universal launcher which can use both Falaq1,2 and has automated loading crane and is mounted on Iranian mounted Kaviran, we have seen this launcher one year ago in parade so it must have completed its tests now because in a photo we saw a number of them lined up for delivery.

Now those of you who (and I am not a regime supporter) ridicule these weapon system, know very well that the West would have never negotiated with Iran, if they could have taken out the Iranian nuclear facilities. That is thanks to these "Toothpaste" tubes and others maybe not be very advanced weapon systems but enough to deter them from attacking Iran.
I am sure many of you residing in the West, would be grateful to the military capabilities of Iran, if ISIS would have entered some of the Iranian cities where you might still have family members and Iran was in the same situation as Iraq and Syria.

on the other hand, back then Iranian politicians weren't subject to arrest on charges of sorcery and back then it has harder to get temporary marriage licenses before setting out on a dirty week-end.