UPDATES: Pushed Back in East; Attacking from South 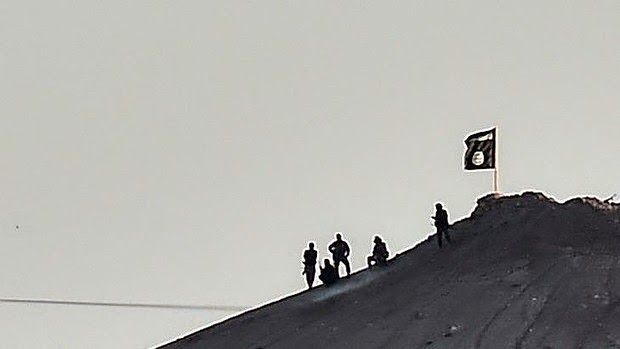 The Islamic State insurgents overran the city of Kobane in Syrian Kurdistan today, and began raising their flags over city buildings. They entered Kobane from both east and west. The Kurdish fighters still in the city are putting up fierce street fights against the invaders. YPG, the main Syrian Kurdish political and military organization, said that thousands of civilians also are inside the town. The lives of Kurdish defenders and civilians still in Kobane are in grave danger.

The capture of Kobane, besieged for 20 days, would give Islamic State control of a long stretch of the Syrian-Turkish border.

UPDATE (Late Monday 10/6): The U.S.-led coalition made a push to save Kobane on Monday, conducting airstrikes on IS positions, and Kurdish fighters pushed IS militants out of the eastern part of Kobani, where they had raised their black flag.

UPDATE (Tuesday 10/7): Islamic State fighters launched a large attack on Kobane from the south on Tuesday, poised to overrun the city.