Chairman of Powerful Assembly of Experts 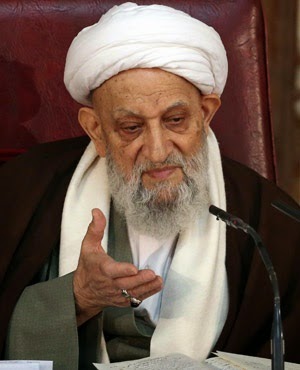 Ayatollah Mohammad Reza Mahdavi Kani, the chairman of Iran’s powerful Assembly of Experts, died today in Tehran. He was 83.

The Assembly of Expert is a body of 86 senior Shia clerics that chooses and can dismiss the supreme leader. Ayatollah Hashemi Rafsanjani was the Assembly’s chairman until 2011, when he was pushed out of the chairmanship by the hardliners because of his moderate policies. It was not clear if he would seek the post again.

The current supreme leader underwent prostate cancer surgery only weeks ago, making the role of the current Assembly in choosing a new supreme leader, or a council of supreme leadership, that much more important. The elections for the next Assembly will be held in early 2016.

Finally some good news! I hope a moderate will hold the post now. It would really help Rouhani.

The grand daddy of all akhoonds, Khomeini croaked right after the war in 1989 from being heartbroken after his defeat. Did a moderate replace him? No.

Give us a break man! Rouhani is cut from the same cloth as the rest of them. They are all in it to win it for themselves,and they don't give a damn about anyone but themselves.

it would be terrible if you replaced him !

Rohani is a good puppet for keeping people in control...during his time... acid attacks against Iranian people, continuous sanctions, oil prices at lowest level, ISIS 50 km from Iranian border etc.
Not so much of achievement!