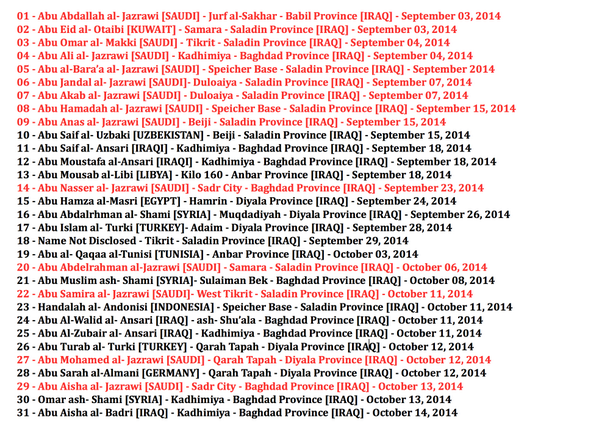 There were 31 suicide bombings in Iraq in the last 45 days. Nearly half (46%) of bombers were Saudis. Over 50 tons of explosives were used. These terrorists need to be stopped; they are destroying Iraq and killing Iraqis in the name of Islam and for their own obscene causes.

one-
No where in THE Holy Koran will you find a verse commanding you to hurl a grenade or stab a non believer ,ISLAM will never remain a divine religion if it encourages atrocities !.

TWO
this cult !, of killing innocent women and children is an ARAB tradition buried deep in the pages of History books. There is a reward for killing innocent people ! ,and this reward is not a gift of 'nine virgins' as misguided sources say.THIS IS what the mercy upon mankind says -"KILLING an innocent soul is like killing all humanity ",and 'saving a life IS LIKE SAVING THE WHOLE HUMANITY"[Prophet P.B.U.H].-whoever kills an innocent soul ,is selling his hereafter ! and will enjoy his WONDERFUL virgins in HELL!.

three-
-This is not ISLAM ! -The humble religion and path followed by the saints , Prophets.A guidance brought down by the Holy Angel from the SUPREME Creator whose benevolence shines to all his creatures without favor. him THE Almighty gives life to All !. Gives sustenance to All.

you worship Him or not, you go to church ,mosque ,or even worship the devil .still your LIFE is guaranteed
! without any strings attached !.

-WHILE the whole WORLD is busy waiting for the divine massage from the- Mercy upon mankind -to reach them -ARABS are busy defacing the beautiful religion -ISLAM by choosing to follow Jahhiliya pre- Islamic Arabic SAVAGERY !.

The Prophet, the Imams who followed him, the Caliphs of early Islam, were all Arabs and came from Arab tradition. Islam was born on Arab land, led by Arabs. You are saying the violence we are witnessing in Iraq and in the region in the name of Islam has its roots in Arab tradition. Aren't you then questioning Islam as a peaceful religion, linking it to a tradition of violence?

Aren't you then questioning Islam as a peaceful religion, linking it to a tradition of violence?----


it's not the religion that's violent, merely the method by which it was spread and the people who started it and spread it....
...and, of course, the many, many thousands of today's Muslims who support suicide bombings and other violent murders committed by fools and lunatics claiming to kill for Islam.

the religion itself is fine....... it's the people in the MIddle east and Central Asua who pretend to follow the religion who are the problem.

There is an extremely violent strand in Islam whose existence should be recognized by Muslims, and not explained away, as the first step to fight its reactionary extremism. Muslims cannot claim there is no serious problem amongst their ranks when the foot soldiers of extremists like ISIL and their suicide bombers are Muslims and giving their lives in what they believe to be the struggle against the world for the Islamic cause. Muslims need to clean their house first before lecturing others, and that's true of both Sunni and Shia branches of Islam.


" A series of acid attacks on women in the historic Iranian city of Isfahan has raised fears and prompted rumours that the victims were targeted for not being properly veiled.

Police have declined to comment on a motive but suspects have been arrested and an investigation is ongoing, General Hossein Ashtari was quoted as saying by the official IRNA news agency.

He said four acid attacks had been reported in Isfahan, 450 kilometres (280 miles) south of Tehran, but he gave no other details.

The violence led to chatter on social networks that there had been up to 13 acid attacks against women drivers who were "badly veiled" with accompanying warnings against leaving car windows open."

one-
no offence but seems you seriously have some little time with Islamic books !-I have with me in my hands ,the Holy Qur'aan and i see no verse that commands me to go kill a non-believer or one whom don't belong to my sect ,-and Islam Nader is never an Arabian tradition.Some on may argue that Islam borrowed from Arab traditions like HAJJ. or the tawwaf [going round the holy Kaaba] during hajj [pilgrimage]-or kissing or touching the black stone and many more !-BUT this can be said by a lazy researcher for all these traditions were started by the patriarch Abraham[AS]-and his sons.The problem is that ,the progeny of Ismael later corrupted these institutions ,then brought in paganism .SO what the Prophet [P.B.U.H] DID was to purify the traditions and restore the meaning of these religious institutions back to their meaning .

two
you have some difficulty understand that ISLAM is the same traditions given to the Jews and well as the same path followed by the Holy Prophets through out history.ISLAM is never an Arabic tradition and was not 'born in Arab land'!.The Prophet[P.B.U.H] was indeed an Arab, it is a tradition followed devine Prophets and him S.A.W.W.is the seal of them all hence-khathaman Nabiyyeen!.

three
There is a thin line b/tween faith and extremism.for you to understand how people get to fooled by mis-interpretations ,you have to look it this way.
We all know the HOLY Prophet was raised by His uncle -Abi Twaleeb,now according to Sunni traditions and sources this beloved Uncle of the Prophet was a non believer.BUT you see a lot of love and respect from the Prophet towards this man !.Why did not the Prophet stab Him ! and claim His virgins !?.Because the Prophet was sent to preach Islam .the humanist divine laws upon mankind 2-among the companions of the Prophet , there were many hypocrites , and Sunni sources show us that some influential companions sometimes begged the Prophet permission ti kill these hypocrites. BUT many times the teaching and counsel from Him was that do not kill someone without any cause for doing this denies you permission to enter Paradise [JANNAT]

four
BUT many times the Prophet met hurdles in His duties for the humanist teachings of ISLAM was a burden to Arabs and this explains why He had to flee for safety in MADINA.Islam was a cultural and spiritual revolution in Arabia BUT one day the Messenger [P.B.U.H] said that a time will come when Arabs will go back to evil ways! not worshiping idols but following the behavior of the savage Jahhiliya customs-and this is when Satan's horn will rise in Arab land.
and this is what we are reading in the History books how savage evil foolish Arab traditions and customs found their way back to live with some among Muslims.

SO then Terrorism is not ISLAM ,The cult of bin Laden and his cunning CIA buddies who conned him of billions after the war of the mujahedeen is nowhere in the KORAN. who ever maims kills, spreads fitna [sedition] upon the face of the earth is is not a true followers of the Mercy upon mankind even if he wears a long beard and flowing robes.