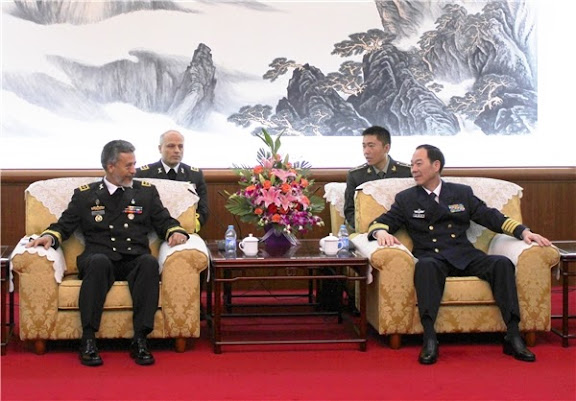 Above: Rear Admiral Habibollah Sayyari and his host Senior Captain Wang Yung at Shanghai Naval Base


Iran's Navy Commander Rear Admiral Habibollah Sayyari and Shanghai Naval Base Commander Wang Yung stressed the vital importance of the expansion of Tehran-Beijing military cooperation for the reestablishment of sustainable peace and tranquility to the region.

Sayyari, who is in China at the invitation of the Chinese Navy, paid a visit to the Shanghai naval base on Monday afternoon.

The Commander of the Shanghai Base welcomed Rear Admiral Sayyari and the accompanying delegation, and called the visit unique in the history of military-naval cooperation between the two countries.

He said that this is the first ever visit of an Iranian Navy commander to China and called it a turning point in bilateral naval ties.

Rear Admiral Sayyari, for his part, referred to historical background of bilateral ties in the naval ground and stressed that promotion of friendly cooperation between the two forces has special importance for Iran.

He expressed the hope that his visit to China would pave grounds for bilateral cooperation between the two naval forces.

Sayyari arrived in China on Monday morning to confer with senior Chinese military officials on the expansion of Tehran-Beijing military relations.

A high-ranking military delegation is accompanying Admiral Sayyari in his trip.

COMMENTARY: Observing an increasing uptick in official naval visits taking place among the Iran Navy and PLA Navy, as well as Iran Navy and Russian Navy. Military exchanges include: 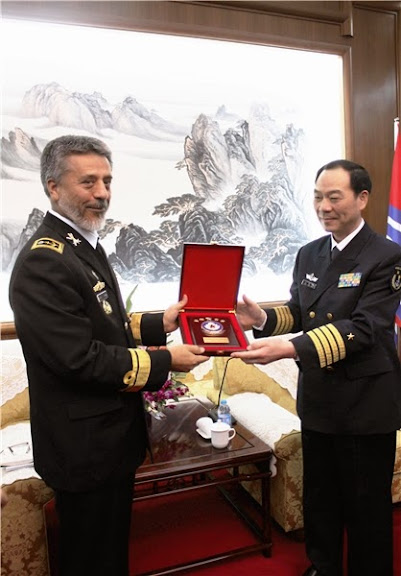 Photos: Fars News Agency
Posted by Mark Pyruz at 3:00 AM

I used "Senior Captain" as the translated PLA Navy rank of "Da Xiao" (O-6 equivalent), as this is the translated rank seen most often in official Chinese military online publications in English.

China is eating Iran up piece by piece...a weak US and wrong policies of isolating Iranians have been pushing Iran into the jaws of Russia and China.I hope this trend can change soon and the West stops the isolation of Iran.