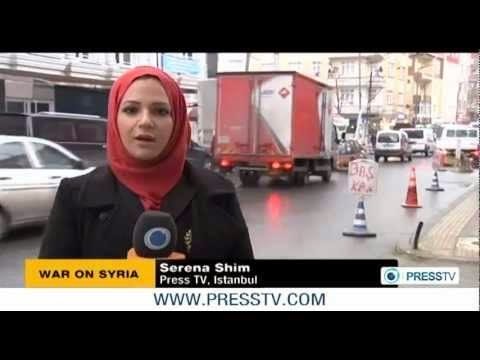 Press TV said Serena Shim, its international correspondent, was killed on Sunday in a car accident near the Turkish-Syrian border. She was returning from a report scene to her hotel in the Turkish city of Surush.

Press TV called the accident “suspicious,” adding that on Friday Shim had received threats from Turkish intelligence agency, accusing her of espionage, and that she told Press TV that she was fearing for her life.

Serena Shim was an American citizen of Lebanese origin. She covered hotspots in Lebanon, Iraq and Ukraine for Press TV. She was in Turkey to cover the war in Kobane.

You forgot to mention that Erdogan referred to Ms. Shim as a spy prior to the "accident". With the threats from Turkish intelligence and the history of Turkish state terror (Turkey murdered 17,000 activists, politicians and teachers, primarily in the Kurdish southeast), it should go without say that this case is a little more than suspicious.

A comment from a few articles before this one mentioned an Iranian-Turkish cold war in the region, with one reply betting that Turkey will be the winner. What has Turkey won thus far? They have alienated themselves from Egypt where the MB has lost power, Syria where Assad has severed ties with Turkey, strained its relations with Iran and Russia, rekindling a Kurdish insurgency and is now known to have semi-warm relations with the IS. Its leader is looking more autocratic with each passing day, jailing journalists left and right and sending Turkish police to beat protesters.

Akhoonds have ordered revenge killings and perpetrated murder too on grand scales as well as jailing journalists. Both of them are despicable so they deserve one another. Civil behavior and democracy does not exist in the middle east.

Turkey is swimming in very dangerous waters and I am confident they have now realized they need a shift in order to not threaten their economy. The Kurds have during the weekend sent message to the Turkish leadership that if routes to Kobane is not provided, no single "tourist resort, hotel, airport or site" will be saved from potential attacks of angry Kurds. This would be the end of tourism for Turkey and also the inflow of investments in its ambitious tourism and civil real-estate projects along its coast.

Erdogan will pay dearly for this....

Why are you happy of potential terrorist attacks against tourists in Turkey? Do you realize how many Iranians travel to Turkey during their vacation? Turkey is a popular place for Tourists. Turkey have really nice hotels, beaches, culture, cuisine, people, architecture and so on. And here you are wishing them harm?! Have you no shame?! The kurds make trouble in Turkey and Iran. They conduct terrorism in Iran also. If you had read history then you would have known that the Kurds in Iran rebelled in 1978-1979 and lately in 2010-2012, trying to break away.

There is no question that Ms.Shim's murder was conducted by MIT (Turkish Intelligence) as well as many other Kurdish dissidents lately. She had exposed Erdogan's collusion with the ISIS terrorists and was asking uncomfortable questions. This is a shameful and reprehensible crime to silence a good journalist. And it must be condemned by all people who value freedom of speech and investigative journalism. Turkey has joined the low ranks of Iranian mullahs and the failed Pakistani state in killing journalists.