King Abdullah Warns of Anarchy or Breakup in Syria 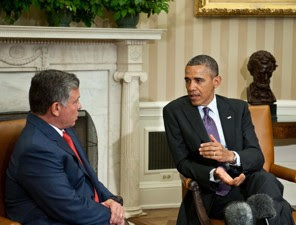 Jordan’s King Abdullah II warned on Friday that a “fragmentation” of Syrian society is an alarming possibility. In meetings with President Obama and congressional leaders in Washington this week, the visiting monarch said Syria appeared increasingly headed toward either anarchy or a breakup that could imperil the region for decades to come. (The Washington Post, 27 April)

“We’re now seeing the surge of (another) threat appear, which is that of militant terrorist organizations that have risen over the past several months,” Abdullah told reporters in Washington. (WashPost, 27 April)
“Left on its current trajectory, the conflict will result in ‘a Taliban-style failed state, or a series of small mini-states,’” a senior Jordanian official told the Washington Post. “We’re looking at the potential for sectarian spillover, threatening the whole region.”

Despite the failure of previous initiatives, the king urged a renewed attempt at a negotiated settlement as the only realistic path toward ending the conflict without splintering the country or condemning it to endless bloodshed. But he has acknowledged that such a settlement would not be acceptable to the rebels as long as President Bashar al-Assad remains in power.

Photo credit: Jordan’s King Abdullah II and President Obama at the White House. 26 April 2013 (The Washington Post)
Posted by Nader Uskowi at 7:00 AM

This pathetic little puppet Abdullah's Jordan itself is an artificial British created rump-state surviving on US/Zionist military and aid. Jordan's 60% Palestinian population were suppressed by US, UKh and Zionist intervention during the "Black-September" of 1970. This clown who has no support in unstable Jordan is really out to lunch. Syria's Salafi terror will destroy Jordan eventually. Those who light matches to their neighbors home always get burned themselves. This puppet was installed by the CIA as the real heir was Hamza, Lisa Hallaby and Husein's son who was kicked out of Jordan when Husein croaked at the Mayo clinic.

It is very clear on how strongly you think of the messenger, but I am still at loss on what you think about the message. Is Syria in danger of becoming a failed state? Is the threat of anarchy or a breakup of the country real? If not, why?

Nader, the US/Zionist agenda is to have a truncated Syria broken on sectarian lines and remove it as a "resistance front" state. The recruitment of braindead Salafi's under alCIAda guise is part of the plan. Jordan and Turkey are the prime stakeholders in this failing enterprise. Actually US itself is a failing state as you well know the socio-economic conditions from the Beltway and beyond.

Abdullah and his rump state of Jordan itself is totally failed state living on US aid. His so-called father was himself on US payroll since his "crowning" after his grandfather was murdered by Zionist assassins in the Zionist establishment days of the late 40's. Jordan has played a very negative role in the region and is the clearing house of US/Zionist regional intrigues. However, the Syrian situation will heavily impact on Jordan as Syria has 7 times the population and is much stronger, hence the US and NATO have stationed troops in Jordan and using it as a training camp for Salafi terrorists. The Salafi cutthroats that the US is training in Jordan will eventually tear unstable Jordan apart. The regional fallout from Syria will burn the whole region. Recently, I heard a senior Lebanese Christian politician's assessment and he was convinced that if Assad ever falls, Jordan will be engulfed by violence as the refugee camps are already seething with discontent and are virtual gulags and rape camps for the Salafis. The situation is much more complex than the usual US ignorance and wishful thinking of Zionist lobby, FOX/CNN.

I am convinced that President Assad will overcome the Salafi terrorists (majority from overseas including Europe) and most nations now support his position and can see the dangers ahead. The meeting of Russian deputy foreign Minister and Hezbollah is quite interesting as to where things are heading. In fact, the whole Arab world and US are now failed states.

“In fact, the whole Arab World and U.S. are now failed states.” Really? As I expected, this is not an analysis, but an expression of anger at the realities on the ground.

You have the option to live in eternal denial as per the past 34 long years. However, the alCIAda thugs will not win in Syria. And you can take this prediction to your nearest Zionist bank. LOL.

There could be another perspective..

The air lifting of fanatic salafists into Syria by all Pro US regimes of the area from every possible hot spot we know of...was To have them destroyed by a strong efficient army without having to bloody ones own hand. (We call this move screwing with some one else D...k.).

Hope is or was to weaken or by best chance destroy a stubborn system that wont swim in the US political streams and if that didn't happen then at least wahabi idiots and salafists get destroyed. Its an absolute win-win situation promoting this conflict. For this very reason , I doubt there is a chance of a political will by the west to change the situation in Syria

However, danger is, how long these Wahabi idiots need to realize they are being screwed, and turn their guns.

Interesting question whether Syria is a "failed state"? I don't believe so as it is functioning state for over 3 millennium, however the 200 year old moth-ridden US is classified as a failed state even by its ex-treasury secretary:

US Joins Ranks of Failed States

The US has every characteristic of a failed state.

The US government's current operating budget is dependent on foreign financing and money creation.

Too politically weak to be able to advance its interests through diplomacy, the US relies on terrorism and military aggression.

Costs are out of control, and priorities are skewed in the interest of rich organized interest groups at the expense of the vast majority of citizens. For example, war at all cost, which enriches the armaments industry, the officer corps and the financial firms that handle the war's financing, takes precedence over the needs of American citizens. There is no money to provide the uninsured with health care, but Pentagon officials have told the Defense Appropriations Subcommittee in the House that every gallon of gasoline delivered to US troops in Afghanistan costs American taxpayers $400.

"It is a number that we were not aware of and it is worrisome," said Rep. John Murtha, chairman of the subcommittee.

According to reports, the US Marines in Afghanistan use 800,000 gallons of gasoline per day. At $400 per gallon, that comes to a $320,000,000 daily fuel bill for the Marines alone. Only a country totally out of control would squander resources in this way.

While the US government squanders $400 per gallon of gasoline in order to kill women and children in Afghanistan, many millions of Americans have lost their jobs and their homes and are experiencing the kind of misery that is the daily life of poor third-world peoples. Americans are living in their cars and in public parks. America's cities, towns, and states are suffering from the costs of economic dislocations and the reduction in tax revenues from the economy's decline. Yet, Obama has sent more troops to Afghanistan, a country half way around the world that is not a threat to America.

The U.S. Department of Defense has released translations of a number of Iraqi intelligence documents dating from Saddam’s rule. One, a General Military Intelligence Directorate report from September 2002, entitled “The Emergence of Wahhabism and its Historical Roots”, shows the Iraqi government was aware of the nefarious purposes of the Wahhabis of Saudi Arabia, often known as Salafis, in serving Western interests to undermine Islam.

Actually Nader the whole arab world doesn`t look to good,several of the us backed dictators are gone replaced by people far less puppet like and the remaining puppets look to be on shaky ground,in deed the whole us backed status quo is looking more and more untenable,throw in the rise of iran and the desperate attempts to weaken it by the west and the stupidly short sighted even potentially suicidal acts like the supporting of the jihadis in syria,I mean what do they think these people will do after they`ve destroyed syria?,why they will turn on their former backers of course,and I imagine jordan will proably be first or second on their list,I wonder which western country will take Abdullah in when this happens?