Third inspection in as many days 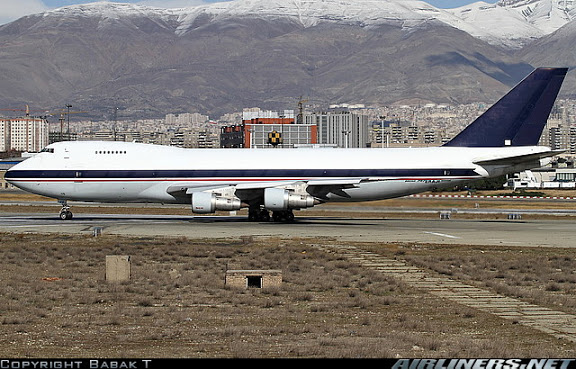 Iraq said today it has forced an Iranian plane headed to Syria to land in Baghdad so authorities could search it for arms. It’s the third inspection in as many days. The 747 cargo flight today contained no weapons, as was the case with the previous two planes inspected. (AP, 10 April)

Baghdad last week vowed to conduct more searches of vehicles on land and aircraft in its airspace, not allowing Iraqi territory to be used to supply weapons to either side in the Syrian conflict.
File photo: An Iranian Boeing 747-2J9F cargo plane (Airlines.net)
Posted by Nader Uskowi at 7:34 PM

Of course Iraq found no weapons. Does one imagine that Iran's biggest ally in the region would "officially" find weapons on a flight assisting Syria, against both Iran AND Iraq's biggest enemy in the region? That would be Al-Nusra which today publicly pledged allegiance to Al-Qaida.

Remember when all those folks outside Syria used to claim the Syrian uprising was a peaceful demonstration for freedom? Remember when these folks scorned former MI5 official Crooke for stating armed Salafi Jihadists were a major force fighting in Syria? Well, there's no longer any ambiguity on the matter, is there.

Iran and Iraq are close allies and are coordinating their policies in the region. These plane "searches" are cosmetic and in any case there are multiple avenues for both Iran and Iraq to help fellow Shias in Syria who are doing quite well anyway. The Syrian military and its morale and cohesion has even baffled its enemies. Most of Syria is now in government control and the Salafi/wahabbi terrorists are falling apart anyway. President Assad is man of immense courage and nationalism, a breed apart from other cowardly Arab puppets in Egypt, Yemen, Tunisia, Libya and the Saudi/Qatari pimps and the Persian Gulf pimpdoms. A recent British made documentary on PBS Frontline showed the strength and conviction of the Syrian military who are well trained, well armed, with high morale and leadership, particularly the 4th armored division commanded by General Maher-al-Assad (the President's brother) which has been at the spearhead of counter-terrorism operations against the Salafi alCIAda murdering cowards.

Iranian authorities are not that stupid enough to be easily get involved, detected and possibly trapped by a not so popular of the so-called U.S.'s self-made world police of the damned New World Order. From my own points of observations, the estimation of those 80 millions iranian brains, are a bit smarter, more consistent and more efficient than those 300 millions americans as a whole. I'm just guessing.

Interesting! Are you saying that Iraqis are tipped off by the Iranians as to which planes to search? That could very well be the case, but we need to hold off on a judgment like that for a bit longer and see if the Iraqis continue their searches.