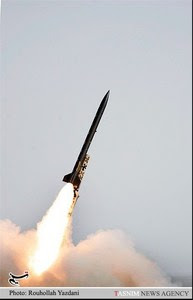 Gen. Heidari did not disclose any more details about the three new rockets, but said they were different from Nazeat 10 and Fajr 5 that were test-fired during a military exercise last March. Nazeat 10 is a ballistic missile with a range of about 100 kilometers.

There is no doubt that the great nation of the Islamic Republic of IRAN is a new superpower in the whole region of the Middle East as which has been written, stated and described, briefly, in the latest book of Robert Baer, the former U.S. CIA Middle East Specialist Agent, and perhaps, can be logically said on its way to joint along with those present superpowers of the world in the future(if not in the very near future). The nation has been single-handedly and firmly standing up against the two world's most criminal nations(guess who) that ever lived on earth. Hopefully!

It is good that these missiles are being improved regularly and play a very effective deterrent. Iran is about to unveil new missiles and a mid-tonnage submarine in a few weeks as well. Iran should increase its defence budget and spend more on R&D.